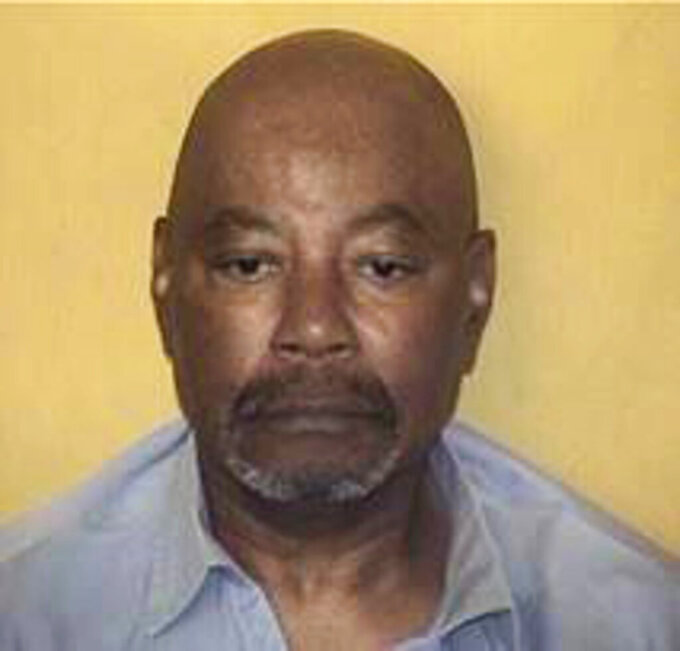 This undated photo provided by the Ohio Department of Rehabilitation and Corrections shows Carlos Ridley. Ridley, serving a life sentence for a triple slaying, was awaiting a court ruling this month he hoped would help him prove innocence through DNA testing. On Monday, May 4, 2020, an Ohio appeals court rejected Ridley's request. The next day, he was rushed to a hospital where he died of COVID-19, according to his two daughters. (Ohio Department of Corrections via AP)

COLUMBUS, Ohio (AP) — Ohio prison inmate Carlos Ridley, four decades into a life sentence for a triple slaying, was awaiting a court ruling this month he hoped would help him prove innocence through DNA testing.

On Monday, an Ohio appeals court rejected Ridley’s request. The next day, he was rushed to a hospital where he died of COVID-19, according to his two daughters.

His last message to them, a few days earlier: “This has been very hard two weeks I feel as if I’ve aged at lease 10 years.”

Ohio has the country’s highest per-prisoner COVID-19 case rate and the fifth-highest prisoner death rate, according to an analysis of state prison cases by The Marshall Project, a nonprofit investigative newsroom dedicated to the U.S. criminal justice system.

At least 45 Ohio prison inmates have died of COVID-19, 27 of them housed — like Ridley — in central Ohio's Pickaway Correctional Institution, which includes a medical center. More than 4,300 inmates and nearly 500 staff members have tested positive statewide.

The family only learned Ridley had been hospitalized when someone from Ohio State University's hospital called Tuesday afternoon, his daughters said. Six hours later, a doctor called to say Ridley had died and that the cause was COVID-19.

“He kept telling us he was sick, for almost two weeks,” his daughter Kenosha Hines, of Columbus, said Thursday. Their 69-year-old father was so ill on April 30 that he had a hard time keeping his head up on a prison video call, she said.

Ridley’s daughters said their father received a negative coronavirus test result in late April and was placed with other inmates who had also tested negative but seemed sick. He had struggled with health problems, including colon and prostate cancer, and used a wheelchair. The family was told he went quickly as blood clots formed in his lungs.

The first inmate to die in Pennsylvania was also identified as a client of the state’s Innocence Project. Rudolph Sutton, 67, an inmate at Phoenix state prison in Montgomery County, died April 8. He was serving a life sentence for murder.

Across the U.S., more than 14,000 inmates have tested positive for COVID-19, the Marshall Project analysis found. Thousands of correctional officers across the country have also tested positive.

Ohio Gov. Mike DeWine has said coronavirus in prisons is “of grave concern” because so many people are crowded together, and has pledged to provide more personal protective equipment and testing.

Ridley always maintained his innocence in the 1981 killing in Lima, according to court records, his family and Donald Caster, a University of Cincinnati law professor who represented him in efforts to test several pieces of evidence from the crime.

That included pill vials, a watch, two lead slugs, a butcher knife, a piece of linoleum with a bloody footprint and a hammer.

Ridley was convicted of killing Sarah Thirkill, 47, her husband, Pelham Thirkill, 51, and 4-year-old Latrina Jones, a foster child in their care. Their severely beaten bodies were found on the evening of March 15, 1981. The Thirkills' 8-year-old grandson was also shot and severely beaten but survived.

A co-defendant, Lawrence Daniel, was convicted along with Ridley. He remains in prison. Both were sentenced to 52 years to life.

Prosecutors theorized that Ridley and Daniel carried out the attack because they believed the Thirkills called police about money that Daniel allegedly stole from the couple. Daniel's attorney at trial accused a star witness for the prosecution of carrying out the killings himself, something the witness denied, according to trial coverage in The Lima News.

Ridley hoped to prove DNA would exclude him and provide proof of another suspect. Trial evidence was weak and Ridley's longtime insistence on his innocence was convincing, Caster said.

The Allen County prosecutor said DNA testing would not have affected the outcome, because of “overwhelming direct and circumstantial evidence” that proved both men's guilt, according to a 2019 court filing.

The Third District Court of Appeals agreed with the prosecutor's argument and declined to authorize the testing. The family wants to continue the case by appealing to the Ohio Supreme Court, an option that Caster said he's reviewing.

Ridley did not know of the court's decision before he died.

“He was just trying to stay alive to get home to us, and that just didn’t happen,” said daughter LaTonya Ridley of Southfield, Michigan.