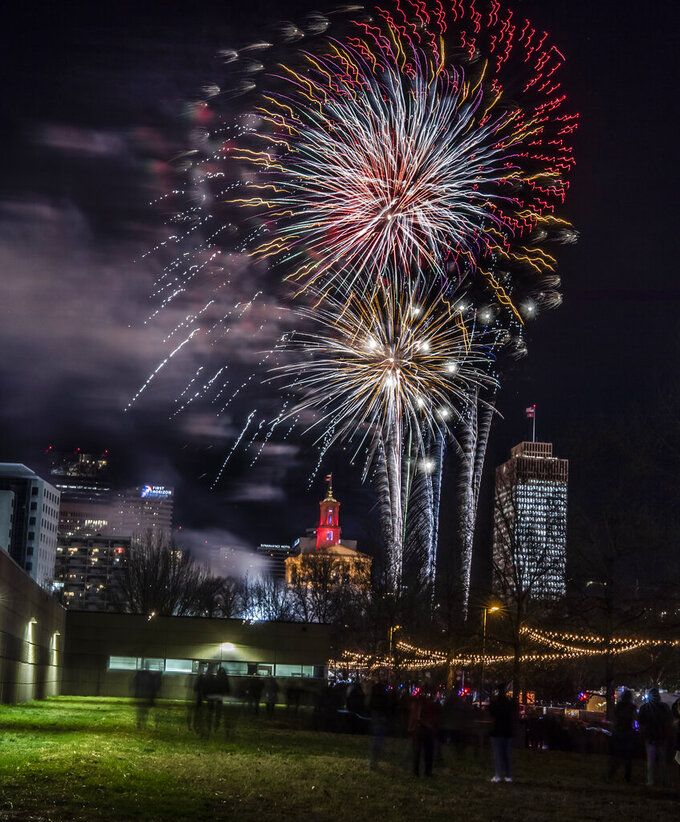 In this Dec. 31, 2019 photo, fireworks explode over Bicentennial Mall during the Jack Daniel's Music City Midnight New Year's Eve celebration in Nashville, Tenn. The Christmas morning bombing of the downtown tourist district forced organizers of what was already slated to be a very muted New Year’s celebration to dial it back even further. Nashville had already canceled its outdoor public concert for a televised one. But organizers had hoped to blow up a 2020 number and have fireworks as a way to say good riddance to a terrible year. (Alan Poizner/The Tennessean via AP)

NASHVILLE, Tenn. (AP) — In Nashville, the Christmas morning bombing of the downtown tourist district forced organizers of what was already slated to be a very muted New Year's celebration to dial it back even further.

“We were going to blow up a 2020 number and have fireworks, but we killed that,” said Bruce Spyridon, president and CEO of the Nashville Convention & Visitors Corp. The explosion had been planned close to the downtown site of the bombing, he said. “To say it would have been tone deaf would be an understatement.”

The city's New Year's celebration started as a large street party just over a decade ago and has grown into an event that draws over 200,000 people with live music from a diverse group of artists that has included Keith Urban, Kings of Leon and Peter Frampton. This year's celebration had already been toned way down, with only a televised concert and no live event. Then came the apparent suicide bombing that injured three people, killed the perpetrator, and knocked out some communications in several Southern states.

Spyridon said they had hoped to have some fun by blowing up 2020 as a way to say good riddance to a terrible year. Now, he's just looking forward to next year's celebration, which he said, “I promise will be our biggest ever."

Meanwhile, just a couple of blocks away at Nashville's famed Ryman Auditorium, Old Crow Medicine Show's 11th annual New Year's concert is featuring four performances instead of the usual one. The show is so popular that many of the tickets were sold before COVID restrictions were put in place, said Ryman spokesperson Alyson Stokes. Because of social distancing they can only fill the auditorium to about 25% capacity, thus the four shows. The Ryman is also offering tickets to a livestream of the performances ranging from $20 for just the concert to a $160 package that includes a virtual VIP pre-party and a band T-shirt, trucker hat and mask.

Some tourists decided to come for New Year's despite the bombing and an early curfew for bars to combat the state's soaring coronavirus numbers. Julianne Boyd was visiting from Indianapolis. He said they planned to eat out "and then go back to our townhome and cheers for the new year.”