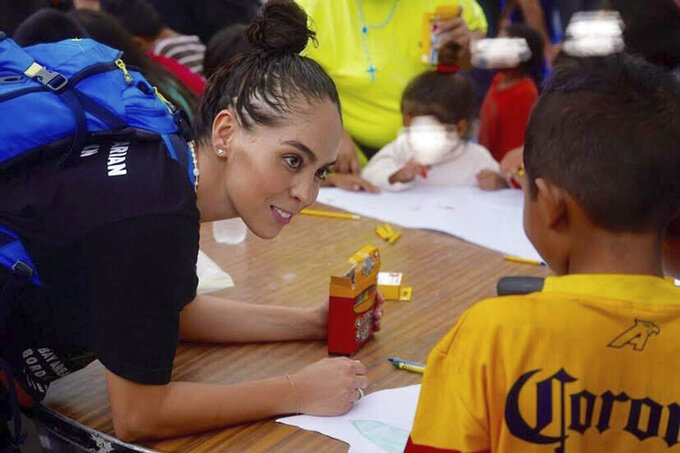 In this October 2019 photo provided by Pocho Sanchez, Daniela Dominguez, assistant professor in counseling psychology at University of San Francisco, draws and chats with children from Honduras at a migrant camp in Matamoros, Mexico. Dominguez said mutual aid networks are part of the Latino culture where people may feel safer getting help from their own community rather than government entities or formal charities. (Pocho Sanchez via AP) 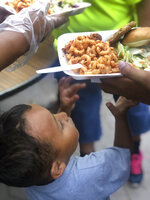 Amid the unfolding disaster of COVID-19 have been moments of generosity, whether it's people pulling together support for college students who've been tossed out of dorms, or collecting money to help restaurant workers, street vendors and movie theater employees pay for their medicine, groceries and rent.

These mutual aid support networks, in which communities take responsibility to care for one another rather than leaving individuals to fend for themselves, have proliferated across the country as the pandemic turns lives upside-down.

The nonprofit Town Hall Project created Mutual Aid Hub to track all the various collective efforts when the coronavirus began its rapid global spread in March. Back then, it counted only 50 mutual aid groups but by May, the number grew to more than 800 in 48 states, driven by what the hub's lead organizer Shivani Desai called a “grassroots explosion of organizing.”

While these informal networks have sprouted up in response to the pandemic, mutual aid organizers and scholars say they have existed long before then. Few are aware of their deep roots in communities of color, where such networks have been built for centuries.

“The concept of cooperating and pooling resources within a community is rooted in communities of color,” said Margo Dalal, executive director of Detroit Community Wealth Fund and an Indian American woman.

The African Union Society in Rhode Island was established in 1780 as the first Black mutual aid society on record, Gordon-Nembhard said. The second was the Free African Society, which was founded in 1787 to provide aid to freed slaves who were denied resources by white institutions. One of the most famous examples of mutual aid are the Black Panther Survival Programs from the late 1960s, through which members distributed shoes, transported elders to grocery stores, offered breakfasts and more.

In many major cities, more than half of Black Americans were part of at least one mutual aid society by the 1800s, according to Gordon-Nembhard. Well over half of the societies she's researched were started and run by Black women, who continue to be vital in mutual aid networks.

Gordon-Nembhard said she believes mutual aid is part of the history of all communities but especially of communities of color that face obstacles accessing resources.

“Mutual aid and co-ops are a way for groups that have faced discrimination to have some level of economic stability," Gordon-Nembhard said. "Part of my work is to remind African Americans that mutual aid is part of their history, too.”

Daniela Domínguez, assistant professor in counseling psychology at University of San Francisco, said mutual aid is particularly helpful for undocumented people, who may feel safer getting help from their own community rather than government entities or formal charities.

“Mutual aid is part of the culture,” she said. “We’re used to not getting the support we need from government structures, so we’ve learned how to be resilient and build these networks for survival.”

The networks themselves are not formal organizations, Domínguez explains, and many people in them don't even refer to them as mutual aid.

Anh-Thu Nguyen, director of strategic partnerships at Democracy at Work Institute and a Vietnamese American woman, said mutual aid has long been a means for survival for many Asian American immigrants.

When Nguyen’s parents came to the U.S., they relied on mutual aid groups that help immigrants find jobs or English lessons.

“And when new people came after them, my mom was there to guide and support these new people,” Nguyen said.

Lending circles, called hui, are often used to pool money for medicine, houses, cars and burial expenses, Nguyen said. That allowed many of her cousins to start their own businesses. Many other immigrant communities, including Chinese, Japanese, Korean and Indian communities, have similar lending circle traditions.

After seeing swaths of new mutual aid societies emerge in March, community organizer Abby Ang created one in Bloomington, Indiana. Today, the Monroe County Area Mutual Aid has 6,000 members who help each other access food and other necessities.

Ang spends hours each day monitoring posts in the mutual aid society's Facebook group connecting people with a need to those who can help. Sometimes people will call her at 3 a.m. asking for the group’s help. She often feels burned out.

“Mutual aid is the extension of all the community organizing work women of color have always done to keep people’s families fed, to keep clothes on everyone’s back,” she said.

Fernando is a member of the Associated Press’ Race and Ethnicity team. Follow her on Twitter at https://twitter.com/christinetfern.