'My Cause My Cleats' campaign has taken a foothold in NFL 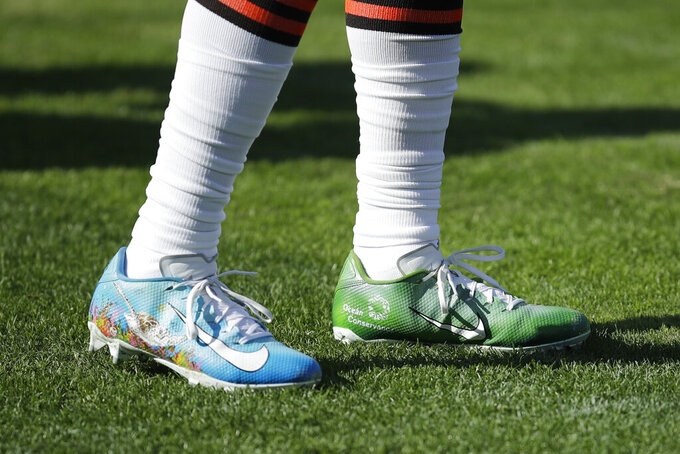 Cleveland Browns running back D'Ernest Johnson wears special My Cause My Cleats shoes before an NFL football game against the Tennessee Titans Sunday, Dec. 6, 2020, in Nashville, Tenn. (AP Photo/Ben Margot)

DENVER (AP) — The “ My Cause My Cleats ” initiative has really established a foothold in the NFL.

Five years ago, about 500 players participated in the inaugural campaign, marking the first time players could wear custom cleats during games without facing fines.

This year, more than 1,000 players took part, wearing their calico cleats during Week 13 games to raise awareness and funds for various causes. Some players whose teams were on the road last week can wear their cleats at home this weekend. Afterward, they'll be auctioned off to benefit those causes.

Showing off their stylish shoes and highlighting the causes they’re passionate about has become something players look forward to every December, said Broncos outside linebacker Bradley Chubb, whose cleats were celestial this year, complete with planets and galaxies to match his nickname “The Astronaut.”

Players have increasingly worn custom-designed cleats during warmups in recent years to make a statement, fashion or otherwise. But the “My Cause My Cleats” campaign marks the only time all season they can wear them in games without getting fined for their fancy footwear.

“You can just go out there and wear custom cleats on the field and really show off what you’ve been working so hard for in the offseason,” Chubb said. “It’s another way for those fans to feel connected to you because they see you playing the game in something that means something to you.

““It’s one of the best times of the year for me because I get to customize my cleats and go out there and look good doing it,” added Chubb, who’s highlighting his foundation which aims “to use sports as a platform to activate human potential.”

This year’s causes include topics such as tackling social justice, supporting families during the coronavirus pandemic and bridging the digital divide. About 21 percent of players selected social justice causes, 17 percent selected causes related to youth and education and 14 percent support health and wellness-related initiatives, the NFL said.

“Season after season I am inspired by the growing number of NFL players that participate in ‘My Cause My Cleats’ and the causes they represent,” Commissioner Roger Goodell said. “Each player has a story to tell and we are grateful for the impact they make in the communities in which they live and work, and society in general.”

Denver safety Justin Simmons said the ripple effect of the player-inspired campaign is that fans start to relate to them as more than just professional football players.

“It puts that humanity level back into the players: We’re more than just football players, and here are the things we care about, here are the things that hits close to home,” said Simmons, who had custom cleats made highlighting both his own foundation and the NFL’s “Fuel Up to Play 60.”

The NFL also is highlighting players and their causes through national television spots and features this month. The first spots featured Chiefs quarterback Patrick Mahomes discussing his charity “15 and the Mahomies” and Vikings receiver Adam Thielen calling attention to mental health through the “Thielen Foundation.”

Other notable calls from Week 13 included:

HILL’S TDs: Tyreek Hill had two long touchdown catches against the Broncos, neither of which counted, in Kansas City’s 22-16 win Sunday night. One was negated by a holding penalty and the other that was incorrectly ruled an incompletion.

Broncos cornerback A.J. Bouye appeared to break up Patrick Mahomes’ 40-yard heave to Hill, jarring the ball high into the air as they tumbled in the end zone. But the ball fell back onto Hill's left shoulder and never hit the ground, but when the officials ruled an incomplete pass, Hill never argued, casually flipping the ball behind him as he trotted back to the sideline.

The Chiefs hurried to punt — there were 9 seconds left on the play clock when they snapped it — and bury the Broncos deep. The slow motion replay was shown during the punt and everyone at Arrowhead and at home realized Hill had actually scored a touchdown.

“I checked with Tyreek,” Chiefs coach Andy Reid said. “He came off, and normally you can tell with a receiver whether he had it or not — especially Tyreek — and he was surprised as any of us he ended up with the football.”

Adam Gase fired defensive coordinator Gregg Williams a day after he called an all-out blitz of Derek Carr, who heaved a perfectly placed 46-yard touchdown pass to Henry Ruggs III with 5 seconds left that gave the Raiders a stunning 31-28 win over the winless Jets.

After the game, safety and captain Marcus Maye called out Williams several times for the surprising call that sent the Jets to 0-12, four defeats shy of joining the ’08 Lions and ’17 Browns as the only 0-16 teams in league history.

“I just felt like that was the best thing for our team moving forward,” Gase said.

Lost a bit in the shuffle was Gase’s offense going three-and-out with a chance to seal the game, leading to the defense needing to take the field one final time with 35 seconds left.