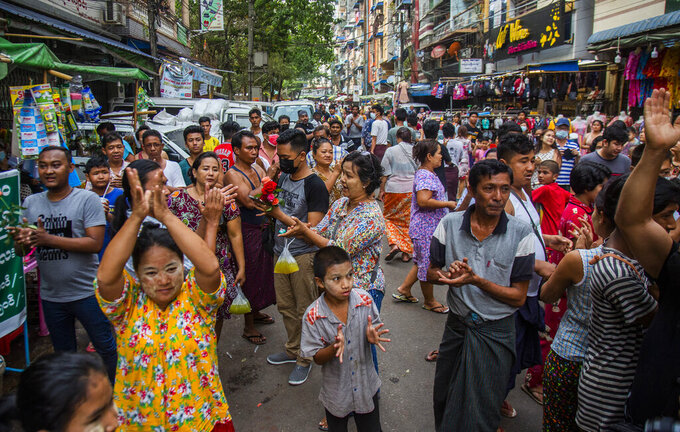 Residents of a local neighborhood applaud as an anti-coup student protester returns home after being released from jail, Friday, March 26, 2021, in Yangon, Myanmar. (AP Photo)

YANGON, Myanmar (AP) — The toll of protesters confirmed killed in Myanmar since last month’s military takeover has reached 320, a group that verifies details of deaths and arrests announced Friday.

Myanmar’s Assistance Association for Political Prisoners said its tally includes only documented cases, with the actual number of casualties “likely much higher.” It said 11 people were killed Thursday, when it also managed to verify 23 deaths that occurred previously.

Myanmar news agencies, including the Democratic Voice of Burma and Mizzima, reported that three more people had been shot dead by security forces in the city of Myeik in southern Myanmar. Video posted on Mizzima TV’s YouTube channel showed protesters risking getting hit by gunfire to carry the bloody body of one young man who the report said had later died.

Social media posts, many including photos of bodies, indicated that as many as seven people may have been killed in various cities by nightfall on Friday. Those reports could not immediately be confirmed.

The Assistance Association described a typical deadly confrontation Thursday in Taunggyi, in Shan state in eastern Myanmar, when “the junta used live ammunition, trying to create a combat zone of residential areas, resulting in four civilians shot and killed, one dead body was dragged away, some other civilians were injured.

State television MRTV on Friday night showed an announcement urging young people — who have been at the forefront of the protests and prominent among the casualties — to learn a lesson from those killed already about the danger of being shot in the head or back.

The warning was taken as an explicit threat because a great number of the fatalities among the protesters have come from being shot in the head, suggesting they have been targeted for death. The announcement suggested that some young people were taking part in protesting as if it was a game, and urged their parents and friends to talk them out of participating.

The association said as of Thursday, 2,981 people had been arrested, charged or sentenced in the crackdown since the Feb. 1 coup that ousted the elected government of Aung San Suu Kyi. Most, including Suu Kyi and President Win Myint, remain detained.

MRTV reported that 322 detainees were released Friday from Insein Prison, describing them as being accused of breaking a public order law by having “demonstrated violently.” On Wednesday, more than 600 others were freed from the same prison, also without being formally charged by a court.

The army's seizure of power halted the Southeast Asian nation’s move toward democracy that began when Suu Kyi’s party took office in 2016 for its first term, after more than five decades of military rule.

At about 4 a.m. Friday, unidentified people tossed firebombs at the headquarters of Suu Kyi’s National League for Democracy party in Yangon, but nearby residents managed to put out the fire before it could cause any major damage.

The movement against the junta and its takeover received a major boost Thursday when the United States and Britain announced tough sanctions against two military-owned conglomerates with vast holdings in many sectors.

The U.S. Treasury Department said its action against Myanma Economic Holdings Public Company Limited and Myanmar Economic Corporation Limited targets the army’s control of large parts of the country’s economy, “which is a vital financial lifeline for the military junta.”

The sanctions against the two companies and their holdings block access to any property they control in the United States and effectively bars any U.S. person or company from conducting any sort of business with them, including supplying them with funds or providing goods or services.

Myanmar’s homegrown Civil Disobedience Movement against military rule is targeting the economy in order to make it difficult for the junta to govern. It has advocated work stoppages by state enterprise workers, bank closures and disinvestment by foreign companies.

Myanmar’s economy is already battered by the COVID-19 pandemic, which surged there in the second half of last year.

The Civil Disobedience Movement, or CDM, which was founded largely by medical workers, has drawn plaudits for its strategy, including a nomination for the 2022 Nobel Peace Prize by six social science professors at the University of Oslo in Norway.

“Our nomination is a recognition of this anti-coup resistance that is working for peace and democracy through non-violent means,” said their nomination letter.

Speaking for the six, Professor Kristian Stokke told The Associated Press their hope is that “the Peace Prize nomination will generate further international recognition and support for the movement and its peaceful aims and means.”

A leading member of the CDM, who asked not to be identified out of fear for his safety, said the nomination “reiterates the need for the junta ... to refrain from any type of violence and peacefully and immediately transfer the power to the democratically elected leaders of the nation.”

Suu Kyi won the Nobel Peace Prize for 1991 for leading a nonviolent struggle against a previous military dictatorship.

Yanghee Lee, the former independent U.N. expert for human rights in Myanmar, applauded the nomination of the CDM with a tweet that read: “Absolutely fantastic. Absolutely appropriate. Absolutely worthy.”