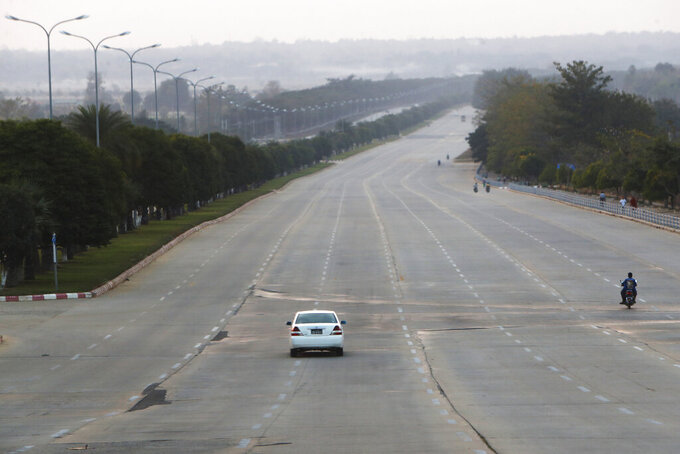 Vehicles make their ways on a road in Naypyitaw, Myanmar, Monday, Feb. 1, 2021. Myanmar military television said Monday that the military was taking control of the country for one year, while reports said many of the country's senior politicians including Aung San Suu Kyi had been detained. (AP Photo)

An announcement read on military-owned Myawaddy TV said Commander-in-Chief Senior Gen. Min Aung Hlaing would be in charge of the country for one year. It said the seizure was necessary because the government had not acted on the military's claims of fraud in November’s elections, in which Suu Kyi's ruling party won a majority of the parliamentary seats up for grabs.

The takeover came the morning the country’s new parliamentary session was to begin and follows days of concern that a coup was coming. The military maintains its actions are legally justified — citing a section of the constitution it drafted that allows it to take control in times of national emergency — though Suu Kyi’s party spokesman as well as many international observers have said it amounts to a coup.

It was a dramatic backslide for Myanmar, which was emerging from decades of strict military rule and international isolation that began in 1962. It was also a shocking fall from power for Suu Kyi, a Nobel peace laureate who had lived under house arrest for years as she tried to push her country toward democracy and then became its de facto leader after her National League for Democracy won elections in 2015.

While Suu Kyi had been a fierce antagonist of the army while under house arrest, since her release and return to politics, she has had to work with the country's generals, who never fully gave up power. While the 75-year-old has remained wildly popular at home, Suu Kyi's deference to the generals — going so far as to defend their crackdown on Rohingya Muslims that the United States and others have labeled genocide — has left her reputation internationally in tatters.

The coup now presents a test for the international community, which had ostracized Myanmar while it was under military rule and then enthusiastically embraced Suu Kyi’s government as a sign the country was finally on the path to democracy. U.S. President Joe Biden threatened new sanctions, which the country had previously faced.

The embarrassingly poor showing of the military-backed party in the November vote may have been the spark.

Larry Jagan, an independent analyst, said the takeover was just a “pretext for the military to reassert their full influence over the political infrastructure of the country and to determine the future, at least in the short term,” adding that the generals do not want Suu Kyi to be a part of that future.

The first signs that the military was planning to seize power were reports that Suu Kyi and Win Myint, the country’s president, had been detained before dawn.

Myo Nyunt, a spokesman for Suu Kyi’s party, told the online news service The Irrawaddy that in addition to Suu Kyi and the president, members of the party’s Central Executive Committee, many of its lawmakers and other senior leaders had also been taken into custody.

Television signals were cut across the country, as was phone and internet access in Naypyitaw, the capital, while passenger flights were grounded. Phone service in other parts of the country was also reported down, though people were still able to use the internet in many areas.

As word of the military’s actions spread in Yangon, the country’s biggest city, there was a growing sense of unease among residents who earlier in the day had packed into tea shops for breakfast and went about their morning shopping.

By midday, people were removing the bright red flags of Suu Kyi’s party that once adorned their homes and businesses. Lines formed at ATMs as people waited to take out cash, efforts that were being complicated by internet disruptions. Workers at some businesses decided to go home.

Suu Kyi's party released a statement on one of its Facebook pages saying the military’s actions were unjustified and went against the constitution and the will of voters. The statement urged people to oppose Monday’s “coup” and any return to “military dictatorship.” It was not possible to confirm who posted the message as party members were not answering phone calls.

The military's actions also received international condemnation and many countries called for the release of the detained leaders.

U.S. President Biden called the military’s actions “a direct assault on the country’s transition to democracy and the rule of law” and said Washington would not hesitate to restore sanctions.

“The United States will stand up for democracy wherever it is under attack,” he said in a statement.

U.N. Secretary-General Antonio Guterres called the developments a “serious blow to democratic reforms,” according to his spokesman. The Security Council will hold an emergency meeting on the military's actions — probably on Tuesday, according to Britain, which currently holds the council presidency.

The U.N. high commissioner for human rights said in a statement that, in addition to politicians, the people detained included human rights defenders, journalists and activists.

In addition to announcing that the commander in chief would be charge, the military TV report said Vice President Myint Swe would be elevated to acting president. Myint Swe is a former general best known for leading a brutal crackdown on Buddhist monks in 2007. He is a close ally of Than Shwe, the junta leader who ruled Myanmar for nearly two decades.

In a later announcement, the military said an election would be held in a year and the military would hand power to the winner.

The military justified its move by citing a clause in the 2008 constitution, implemented during military rule, that says in cases of national emergency, the government’s executive, legislative and judicial powers can be handed to the military commander-in-chief.

It is just one of many parts of the charter that ensured the military could maintain ultimate control over the country. The military is allowed to appoint its members to 25% of seats in Parliament and it controls of several key ministries involved in security and defense.

In November polls, Suu Kyi's party captured 396 out of 476 seats up for actual election in the lower and upper houses of Parliament.

The military has charged that there was massive fraud in the election — particularly with regard to voter lists — though it has not offered any convincing evidence. The state Union Election Commission last week rejected its allegations.

Concerns of a takeover grew last week when a military spokesman declined to rule out the possibility of a coup when asked by a reporter to do so at a news conference on Tuesday.

Then on Wednesday, the military chief told senior officers in a speech that the constitution could be revoked if the laws were not being properly enforced. An unusual deployment of armored vehicles in the streets of several large cities also stoked fears.

On Saturday and Sunday, however, the military denied it had threatened a coup, accusing unnamed organizations and media of misrepresenting its position.