Napoli appeal upheld, match vs Juventus will be played 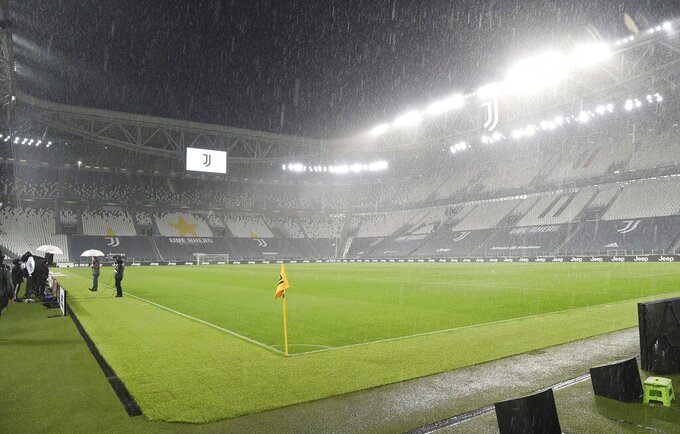 FILE - In this Sunday, Oct. 4, 2020 file photo, rain falls over the Allianz Stadium in Turin, ahead of the scheduled Serie A soccer match between Juventus and Napoli. Napoli won an appeal on Tuesday against its default 3-0 loss to Juventus and so the match will be rescheduled and the penalty point revoked. Napoli had seen previous appeals rejected and took the matter to the Italian Olympic Committee, which decided in favor of the club. (Tano Pecoraro/LaPresse via AP)

MILAN (AP) — Napoli won an appeal against its default 3-0 loss to Juventus and the Serie A match will be rescheduled and the penalty point revoked.

Napoli had seen previous appeals rejected and took the matter to the Italian Olympic Committee, which decided in favor of the club on Tuesday.

The ruling meant Napoli moved from fifth place to third, while Juventus slipped to fourth after losing the three points it had been awarded. Juventus remained below Napoli on goal difference after falling to its first defeat of the season later Tuesday, a 3-0 loss to Fiorentina.

The first deciding factor if teams are level at the end of the season is head-to-head record, then goal difference. Napoli still has a game in hand.

Napoli was issued a 3-0 loss and one-point penalty for not showing up at Juventus on Oct. 4 because of coronavirus cases.

Last month, the FIGC court of appeal upheld the league’s ruling that Napoli did not have a valid reason for missing the fixture and should have followed the existing COVID-19 protocol, which was accepted by all clubs before the season.

Napoli at the time had just two players who were positive for COVID-19 but argued it had been ordered not to travel by the local health authority.

This story has been corrected to show that Napoli is above Juventus in the league standings.