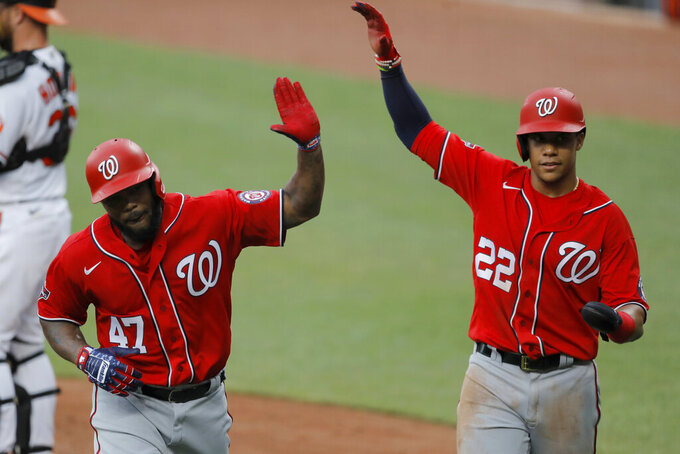 WASHINGTON (AP) — Washington Nationals outfielder Juan Soto was still waiting on Wednesday to be cleared to play by the city government after getting the OK from Major League Baseball to return from the COVID-19 injured list.

Manager Dave Martinez said the Nationals hope their 21-year-old slugger will be allowed to work out with the team starting Saturday and play in their first game after that — which is next Tuesday at home against the New York Mets.

Soto, who had 34 homers and 110 RBIs during the 2019 regular season and was a breakout star of October, tested positive for the coronavirus and was sidelined on opening day last week.

The Nationals' starting lineup lost another middle-of-the-order hitter when Howie Kendrick was scratched three hours before the scheduled first pitch of Wednesday night's game against the Toronto Blue Jays because of upper back stiffness. Washington said Kendrick was available to pinch hit.

Without Soto, the Nationals entered Wednesday with a 1-4 record, having lost three games in a row while scoring a total of four runs during the skid.

“He’s hurting right now. He wants to be with the guys. He’s just waiting, trying to get back as soon as possible," Martinez said. "I talked to him this morning. He’s a little down. I told him: All he can do is hang in there, and we’re doing the best we can to get him back here as quick as possible. We’re in a tough situation. We definitely miss him. We can’t wait to get him back.”

The reigning World Series champions have an unusual four-day break coming up, because their series scheduled for Friday through Sunday at Miami was postponed after the Marlins were told not to play the rest of this week after more than a dozen players failed tests for the coronavirus. And it just so happens that Monday was a planned day off for the Nationals in the MLB schedule for the pandemic-shortened 2020 season.

Martinez said Tuesday that Soto had come up negative for COVID-19 on back-to-back tests, a requirement for MLB to let him back on the field. But Soto also needs to get approval from the D.C. Health Department.

“He’s had no symptoms. He feels good. For him, this is kind of troublesome, because he doesn’t understand,” Martinez said. "I just have to reiterate to him: 'You've just got to stay positive through this whole thing. And as soon as we can get you back, you’ll be back.'”

Notes: With Stephen Strasburg still sidelined by a nerve issue in his right hand, Erick Fedde again will fill in as Washington's starting pitcher Thursday against Toronto. “We’ll have to regroup and go from there,” Martinez said. “We’ve got some days coming up, so we’re kind of sitting down, talking about different options that we might have.” ... Strasburg has been throwing off flat ground only so far, and planned to toss from about 75 to 80 feet away Wednesday, Martinez said. “Yesterday, he threw about maybe 75 percent. Today he’s going to kind of air it out to see where he is at,” the manager said. "If he passes that we will see how he feels tomorrow. He might throw a side in a day or two.”