NBA lays out its vision for Disney restart to teams, players 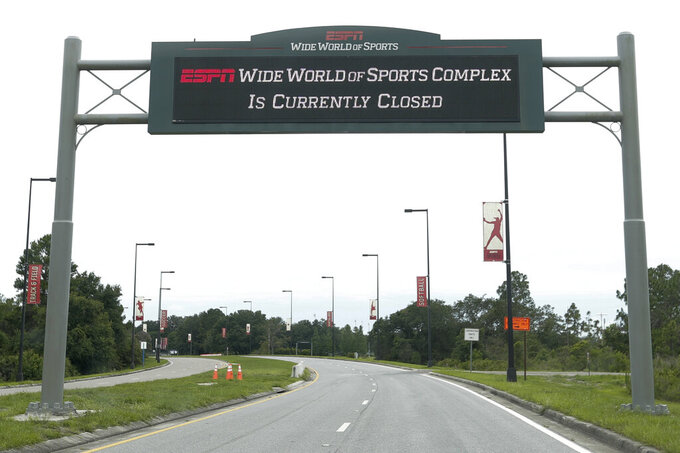 A sign at the entrance to ESPN's Wide World of Sports at Walt Disney World is seen Wednesday, June 3, 2020, in Kissimmee, Fla. The NBA has told the National Basketball Players Association that it will present a 22-team plan for restarting the season at Disney. (AP Photo/John Raoux)

The NBA described very specific plans to players and teams for the restart on Tuesday, doing so in a memo and handbook both obtained by The Associated Press. With safety being of the foremost importance during the coronavirus pandemic, players were told they will be tested regularly — but not with the deep nasal swabs — and must adhere to strict physical distancing and mask-wearing policies.

The league and the National Basketball Players Association have been working on the terms of how the restart will work for weeks, all while constantly seeking advice from medical experts including Dr. Anthony Fauci, perhaps the best-known physician in the country when it comes to the battle against COVID-19.

“My confidence, it didn’t exist at the beginning of this virus because I was so frightened by it,” union executive director Michele Roberts told AP. “Now having lived, and breathed, and suffered through the hours and hours of understanding the virus, and listening to our experts, and comparing different alternative protocols, I can’t even think of anything else we could do short of hermetically seal the players that would keep them safe.”

Later Tuesday, the NBA released its medical protocols to teams, a 108-page file. Among the highlights: players must shower in their individual hotel rooms instead of the game or practice arenas, be part of a contact tracing program, and that it is “recommended that coaches wear face coverings pre- or post-game where feasible."

“The occurrence of a small or otherwise expected number of COVID-19 cases will not require a decision to suspend or cancel the resumption of the 2019-20 season," the NBA wrote.

Most teams will arrive in Florida on July 7, 8 or 9. A person with knowledge of the situation said the reigning champion Toronto Raptors, the lone NBA team based outside of the U.S., will be permitted to gather for some pre-camp workouts — under strict guidelines that other teams will follow in their own cities — before that arrival date. The Raptors are likely to train somewhere in Florida, said the person who spoke to AP on condition of anonymity because no deal has yet been signed.

For the Raptors, it's been an area of concern largely because of current Canadian government regulations that call for a 14-day quarantine for people returning to Canada. Some Raptors players are in Toronto right now; some are in the U.S.

Nobody on the NBA's Disney campus, which has been loosely described as a bubble, will be allowed in anyone else’s sleeping room. The NBA also told players and teams that it will work with one or more outside health care companies to provide a medical clinic with X-ray and MRI capability on the campus — critical, since in theory the league would not want players and team staff leaving and potentially facing coronavirus exposure by going outside of the Disney property for such exams.

The league’s plan also spells out how training rooms and meeting rooms will be utilized, the procedures for practice-court usage — three-hour blocks per team, all scheduled, with one open hour in between sessions for cleaning and sanitizing — and even how team and player laundry will be handled.

It also addresses the polarizing issue of how the league and its players will be able to address social injustice and racial inequality -- two issues of constant importance, particularly now across the country.

The NBA said it would be “a central goal of our season restart” to bring attention and what it called “sustained action to issues of social injustice, including combatting systemic racism, expanding educational and economic opportunities across the Black community, enacting meaningful police and criminal justice reform and promoting greater civic engagement.”

The league said it remains in talks with the NBPA how best to make that happen. Some NBA players, such as NBPA executive board member Kyrie Irving of the Brooklyn Nets and Los Angeles Lakers center Dwight Howard, have suggested that playing could take away from the movement to spur immediate and dramatic change on racial issues in the country.

NBA Commissioner Adam Silver has said that if a player does not feel comfortable playing at Disney — whether for health reasons or because of the social-justice issues — then he does not have to report with his team and will not be disciplined, other than losing salary for games missed.

“The very fact that our players have the option of not playing, I think says a lot about the commissioner’s ability to appreciate how big an issue this is, not just for African-American players but for all of our members,” Roberts said. “There’s not been one ounce of skepticism about the sincerity of the players’ feelings about this.”

The NBA is planning on games in three arenas during the seeding-game portion of the restart, the ones where each of the 22 teams going to the ESPN Wide World of Sports complex will play eight games before the playoffs begin. Teams will be housed in three hotels, with between six and eight teams in each.

Other plans the NBA has for the restart include mental health professionals being available for players and coaches; pregame chapel services, done virtually; yoga and meditation; three meals a day and four meals on game days; and restaurant availability.

Teams can bring up to 35 people as part of the basketball operations group, which includes players, a senior executive, an athletic trainer, a strength and conditioning coach, an equipment manager and security.