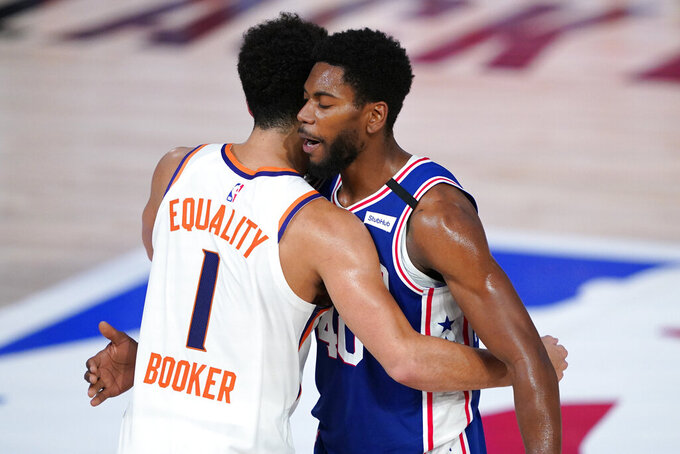 LAKE BUENA VISTA, Fla. (AP) — NBA players could have some family members or close friends inside the season-restart bubble with them by the end of the month.

And that raises the possibility of having a real, albeit small, cheering section for some playoff games.

The league detailed the policies for guest arrivals to teams on Wednesday in a memo, a copy of which was obtained by The Associated Press. The opportunity to bring guests into the bubble at Walt Disney World will be only for teams advancing to the second round of the playoffs, and the earliest any guest could satisfy quarantine rules and be reunited with a player is Aug. 31.

In most cases, players would be limited to four guests. The league told teams that any guests would have to be either family members, “longtime close personal friends with whom a player has an established, pre-existing, and known personal relationship,” private security staff and established family childcare providers.

Those who wouldn’t be allowed into the bubble: “trainers, physical or massage therapists, personal chefs, hair/apparel stylists, tattoo artists, and current/prospective business partners, and certified agents (other than family members), among others,” the memo said.

Also not allowed, according to the league: casual acquaintances, friends by association, anyone the player has not previously met in person or is “known by the player only through social media or an intermediary."

ESPN first reported on the contents of the memo.

Players have made no secret about how difficult it is to be away from their families and close friends inside the bubble. Some players have needed to leave the bubble for family emergencies; others, such as Boston’s Gordon Hayward, have said they will leave for the pending birth of children. Hayward and his wife are expecting their fourth child next month.

“I miss the hell out of my family,” Los Angeles Lakers forward LeBron James said last week. “My wife, my kids, my mother, and so on, and so on. So, it’s a huge challenge.”

The Phoenix Suns have had friends and family at games — in the form of a pregame video that introduces starters before the games that are classified as Suns’ home contests. The video was trending Tuesday when the Suns released a copy on their social media channels, and many NBA players such as James and Toronto’s Kyle Lowry raved about the gesture.

“We say family a lot,” Suns coach Monty Williams. “It was a surprise to all of us the first time we saw it, to see your families organize that kind of intro. It’s unique.”

Exceptions to the four-person limit could apply in cases where the player has up to four of his minor children coming to the bubble. But in all cases, the same policies for others in the bubble — such as adhering to strict standards before traveling to the Orlando area, then quarantining before being allowed to enter the campus, plus submitting to daily testing and mandatory wearing of face coverings — would apply to guests as well.

Guests would also have to remain in the bubble, meaning the adjacent Disney World theme parks would be off-limits. The league said programming and entertainment for kids would be available, such as games, swimming pools and bicycles.

Players would also get one ticket authorizing entry for one adult to each of that team’s playoff games after guest arrivals, so basically for the second round and beyond. That ticket would also allow an adult to bring a child — provided the child is 2-foot-8 or shorter — to those games as well, if “the child remains seated with ... the adult to whom the ticket was issued, maintains at least six feet of distance from any other individual, and wears a face covering.”

That would be the first opportunity for players to hear actual cheers from people inside a game arena since the season shut down on March 11 because of the coronavirus pandemic. Games during the restart have had a fan presence, but only on 17-foot-high video boards that surround the game courts.

The league said it would seek ways to add seating and potentially give players more than just the one ticket per game.

Teams will also be allowed to add staff to the bubble, with a requirement being an on-campus person to serve as a liaison between the guests, teams and NBA league office.