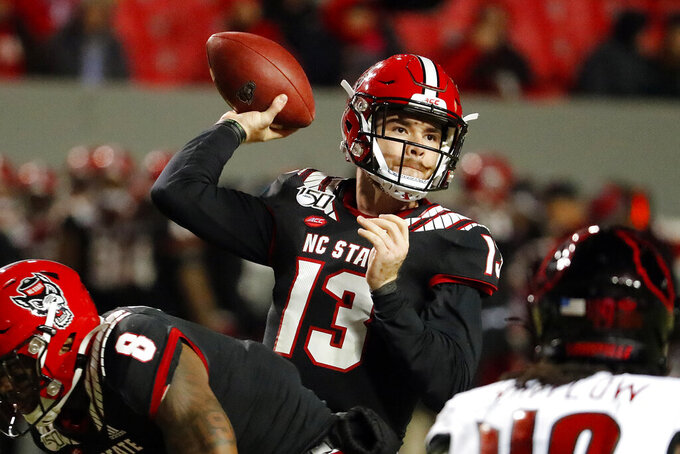 FILE - In this Nov. 16, 2019, file photo, North Carolina State's Devin Leary (13) passes the ball against Louisville during the first half of an NCAA college football game in Raleigh, N.C. The Wolfpack will try to regroup after winning just four games last season. (AP Photo/Karl B DeBlaker, File)

RALEIGH, N.C. (AP) — North Carolina State University said Friday it has received permission from the state to allow up to 350 fans to attend its Saturday home football game against Wake Forest University.

The North Carolina Department of Health and Human Services confirmed the gathering limit to The Associated Press on Friday morning.

“We received word that we can have 350 in attendance tomorrow rather than 50,” said Fred Demarest, spokesman for N.C. State's athletics department. “We will be giving 250 to our player parents and providing 100 for Wake Forest.”

“We understand that parents and close family members are accustomed to, and look forward to seeing their athletes play games and that not being there is incredibly difficult,” the health department told the AP.

“Our program is grateful for the decision from the department of North Carolina Health and Human Services to allow 350 fans at the game tomorrow night and next week," Clawson said in a statement. "We are appreciative of NC State sharing that allotment with us so that we can allocate tickets to our student-athletes families.”

“If the above criteria is met, DHHS supports NC colleges and universities including 2 family member spectators per athlete for up to 350 total per event,” the department said.

Other colleges look forward to having fans in person.

North Carolina team spokesman Jeremy Sharpe said the school has informed its players that "moving forward, they will all have access to a minimum of two tickets for their families.”

UNC was scheduled to host UNC-Charlotte on Saturday, but the game was canceled after a number of Charlotte players were placed in quarantine. North Carolina's next home game is scheduled for Oct. 10 against Virginia Tech.

East Carolina, which will host the Central Florida on Sept. 26, said in a statement it plans to utilize “all that is permitted” for families to attend the football games.

But not all schools are planning to allow fans into the games.

Duke won't allow parents to attend Saturday's home game against Boston College. Art Chase, a spokesman for Duke athletics, said the school would go forward with no fans in attendance.