NCAA board hands call on fall championships to each division 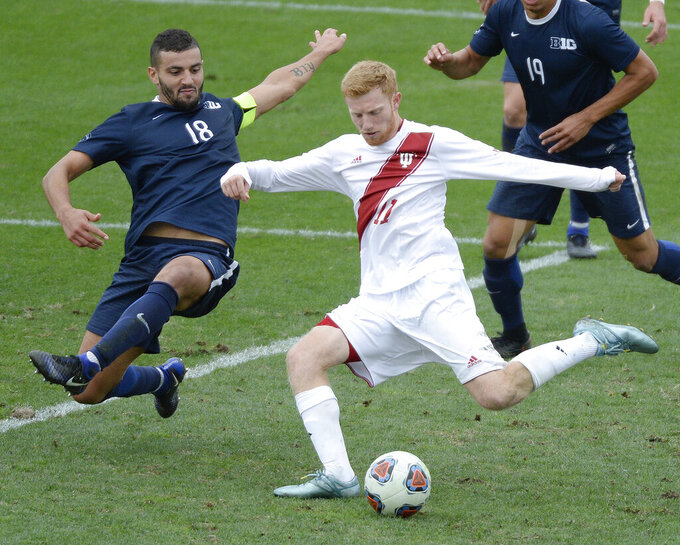 FILE - In this Nov. 6, 2017, file photo, Indiana's Cory Thomas (11) kicks the winning goal past Penn State's Dani Marks (18) during overtime in a Big Ten NCAA college soccer match in Bloomington, Ind. The NCAA Board of Directors is allowing each division of the association to decide independently whether it will be able to conduct championship events safely in fall sports such as soccer, volleyball and lower levels of football during the coronavirus pandemic. (Chris Howell/The Herald-Times via AP, File)

The NCAA Board of Governors on Wednesday directed each division of the association to decide independently by Aug. 21 whether it will be able to conduct championship events safely in fall sports such as soccer, volleyball and lower levels of football during the coronavirus pandemic.

The association's highest governing body had been considering what to do about NCAA fall championship events, but instead of making a broad decision across three divisions, it set parameters for each to make its own call.

According to the board’s decision, at least 50% of teams competing in a fall sport in any division must conduct a regular season this fall for a championship to be held.

Championships may use reduced fields of teams or competitors in individual sports and either predetermined sites or a single-site format to deal with COVID-19.

The board emphasized that all fall sports activity, whether it be preseason practices, regular-season games or postseason national championship tournaments, must follow the NCAA's return-to-sport guidelines.

"First and foremost, we need to make sure we provide a safe environment for college athletes to compete for an opportunity to play in NCAA championships,” NCAA President Mark Emmert said in a statement. “A decision based on the realities in each division will provide clarity for conferences and campuses as they determine how to safely begin the academic year and the return to sports.”

The NCAA board also said schools must honor an athlete's scholarship if the athlete opts out of the coming season because of concerns about COVID-19, and it directed each division to determine no later than Aug. 14 whether opting-out athletes could retain a year of eligibility.

The board added that the NCAA will not permit member schools to require athletes to waive legal rights regarding COVID-19 to participate in sports, and any expenses incurred by athletes related to COVID-19 must be covered by schools under current insurance standards.

The NCAA is setting up an email address and phone hot line to allow athletes, parents and others associated with college athletic departments to report “alleged failures” of COVID-19 protocols and guidelines.

Scholarship and eligibility retention is among the demands of the Pac-12 players #WeAreUnited group that is threatening to boycott practices and games if a lengthy list of concerns are not addressed by the conference.

Players want to know: If they opt out, will they be allowed to retain the year of eligibility?

“The season is creeping up on us and we have no answers,” Stanford receiver Elijah Higgins said.

That movement has now spread. A group called #BigTenUnited posted its own list of demands on The Players' Tribune website on Wednesday, though it focuses exclusively on COVID-19 guidelines and protocols. The Pac-12 players want the conference leadership to also address racial injustice in college sports and economic rights of college athletes. One the Pac-12 players' demands is a 50% split of media revenue generated by a sport with its players.

Among the Big Ten players' demands is an increase in COVID-19 testing of players, including testing on the day of competition, with results delivered at least two hours before a game.

Current NCAA standards are to have athletes tested and the results returned within 72 hours of a competition. The Power Five conferences have been working on their own COVID-19 guidelines, which have similar testing standards to the NCAA's.

“College Athlete Unity (CAU) is going on record to express the concerns of over 1,000 Big Ten football players,” the players wrote in an open letter to the conference and NCAA.

That came just a few hours after the Big Ten released its revised 10-game, conference-only schedule that is set to begin Sept. 5. The Big Ten was the last Power Five conference to announce a hopeful starting date for the regular season and the first to stick with its original Labor Day weekend kickoff.

Big Ten Commissioner Kevin Warren offered sobering words of caution to go with the hope of the football season starting in a month.

“There is no guarantee," Warren said on Big Ten Network, "that we’ll have fall sports or a football season."