NCAA football oversight asks board for time on fall sports 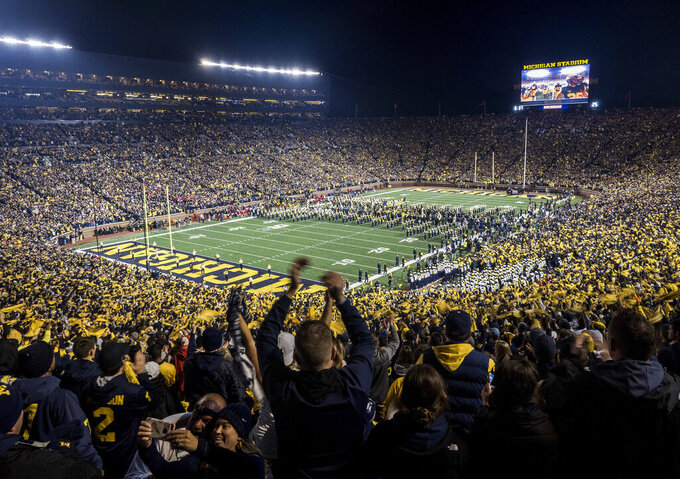 FILE - In this Oct. 13, 2018, file photo, fans cheer as the Michigan team takes the field at Michigan Stadium for an NCAA college football game against Wisconsin in Ann Arbor, Mich. The University of Michigan says fewer fans, if any, will attend games at “The Big House” if the Wolverines play college football games this year. The athletic department says a final decision will be made after conferring with medical experts, the school’s leadership and the Big Ten Conference, along with government officials and agencies. (AP Photo/Tony Ding, File)

The NCAA football oversight committee is asking the association’s Board of Governors to avoid making a decision later this week on whether to conduct fall championships as college sports tries to find a path to play through the pandemic.

A letter dated July 21 was sent by committee chairman Shane Lyons, the West Virginia athletic director, to the board before it meets on Friday. The letter was obtained Wednesday by The Associated Press and first reported on by Yahoo Sports.

“We acknowledge that the path forward will be challenging, and that the virus may ultimately dictate outcomes,” the letter says. “We are simply requesting that the Board of Governors not make an immediate decision on the outcome of fall championships, so that conferences and schools may have ample latitude to continue to evaluate the viability of playing football this fall.”

The board is the NCAA's highest-ranking governing body, comprised mostly of university presidents representing all three divisions of its nearly 1,300 member schools. The board could decide to call off NCAA championship events in fall sports such as soccer, women’s volleyball and lower-division football.

The NCAA has no authority to postpone or cancel specific seasons, a decision that would be up to individual schools or their conferences. But canceling or postponing NCAA championships could increase pressure for conferences to call off their seasons.