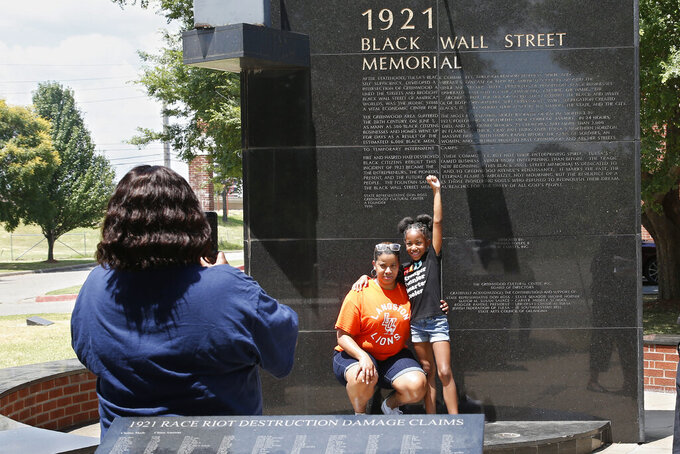 TULSA, Okla. (AP) — In the real world, 74-year-old Donald Shaw is walking on the empty, parched grass slope by Tulsa’s noisy crosstown expressway. He's on the other side of the city’s historical white-black dividing line from where President Donald Trump will hold a rally Saturday with his overwhelmingly white supporters.

But Shaw can conjure stories and images of so much more — the once-thriving black community that stood on this same ground, destroyed nearly a century ago by white violence and ensuing decades of repression.

“Just imagine, in your mind, all these homes,” Shaw said one morning this week, describing the black-built, black-owned houses and churches that once covered dozens of blocks where he's walking, the site of Tulsa's 1921 race massacre. “Just picture that.”

“Hotels, movie theater, roller rink,” said Shaw, a retired man who spends his mornings sitting in the shade of an engraved stone memorial to the Home Style Café, A.S. Newkirk photography studio, and literally hundreds of other African American-owned bakeries, barber shops, attorney offices and businesses razed in the massacre.

Burned bricks and a fragment of a church basement are about all that survive today of the more than 30-block historically black district. On May 31 and June 1 in 1921, white residents and civil society leaders looted and burned Tulsa's black Greenwood district to the ground, and used planes to drop projectiles on it.

The attackers killed up to 300 black Tulsans, and forced survivors for a time to internment camps overseen by National Guard members.

Historians say the trouble began after a Tulsa newspaper drummed up a furor over a black man who allegedly stepped on a white girl’s foot. When black Tulsans showed up with guns to prevent the man’s lynching, white Tulsa responded with overwhelming force. A grand jury investigation at the time concluded, without evidence, that unidentified agitators had given Tulsa's African Americans both their firearms and what was described as their mistaken belief “in equal rights, social equality and their ability to demand the same.”

“Everything they had downtown,” Shaw said of the white-owned business district where Trump will rally, “we had here.”

Trump’s choice to resume his giant rallies in Oklahoma, a loyal Republican state, and in Tulsa, an oil center, has brought a surge of national interest in the Greenwood district once called Tulsa’s “Negro Wall Street.” His rally at the 19,000-seat BOK Center will be Trump’s first since the coronavirus pandemic shut down much of the U.S. by late March.

Trump’s initial plan to hold the rally on Friday — Juneteenth — also sparked interest in the turbulent racial legacy here, although he later pushed back the rally date to Saturday. So has a spring of nationwide street protests over police killings of George Floyd and other black Americans.

Despite the Oklahoma heat, visitors of all races drive up to the site of the destroyed black community. They take photos of themselves in front of the inscribed memorials to what’s now called Black Wall Street. They raise a defiant fist in the air for other photos in front of a mural to Black Wall Street painted on the side of the overpass.

For Shawn-Du Stackhouse, a barber from the Washington, D.C., area and one of those visiting the Tulsa massacre memorials, the proof that cellphone videos provide of killings of African Americans today somehow make the killings of the past, like Tulsa’s, more real as well.

For black Americans, the cellphone videos “show what they have already known,” Stackhouse said. “It gives more confidence” to speak up about all the killings, past and present, he said.

The Tulsa rampage was part of a surge of white attacks on black communities — from Washington, D.C., to Chicago to the Pacific Northwest — at the time, said Scott Ellsworth, a historian who has worked for decades to bring the Tulsa massacre to light. The Ku Klux Klan was surging as well, putting many of its members in public office and other influential positions.

In 1915, President Woodrow Wilson gave a White House screening and praise to “The Birth of a Nation,” a tremendously influential and viciously racist film on the South.

Today, opponents say Trump's statements and actions embolden white supremacist sentiment in the country. That includes Trump’s opposition to renaming military bases named after Confederate Civil War figures, and his emphasis on a tough “law and order” response to recent protests. Trump denies any racism, and said his administration has been beneficial to African American citizens.

Asked Monday about any concerns that Trump’s rally may fan racial tensions in Tulsa, Oklahoma Republican Party chairman David McLain said, “I would like to invite all nationalities into the Republican Party. … We are a party of great opportunity for anybody, race, creed or color.”

Black community groups are organizing a Juneteenth ceremony and justice rally for Friday on the grounds of the memorial district. The Rev. Al Sharpton will speak alongside family members of Terence Crutcher, a black motorist killed by Tulsa police in 2016 while unarmed, Sharpton’s publicists said.

Tulsa's Republican mayor, G.T. Bynum, has formed a commission for marking the 100th anniversary of the massacre next year. Although expressing doubts about calls for reparations to Tulsa's African Americans, Bynum has supported the search for unmarked burials of victims of the massacre.

Next month, experts plan painstaking examination and excavations of an existing Tulsa cemetery to look for such unmarked graves, said Ellsworth, who teaches African American history at the University of Michigan.

After generations of determined public silence on the massacre — long referred to by white Tulsans dismissively as a race “riot” — black and white Tulsans increasingly are trying to tell the story of Black Wall Street, including its fiery, deadly end.

Teaching about the massacre is being added to state and city school standards, so that this fall third graders will learn about it. Even preschoolers in some districts are being told about Black Wall Street — not about how it ended, but what it was, said Danielle Neves, deputy chief of academics for Tulsa public schools.

“Four-year-olds can understand that people like them once owned movie theaters and hotels and ... had a thriving community,” Neves said.

At the area's Greenwood Leadership Academy school, classrooms are named after the Dreamland movie theater and other black businesses that white Tulsans burned down, said Kristi Williams, operation manager at the school. Williams' great aunt fled with her date from one theater when the armed whites came to destroy the black part of town in 1921.

Williams, whose family descended from African Americans enslaved by the Oklahoma-based Muscogee (Creek) Indian nation, emphasizes to pupils the joint power and financial resources that communities like Tulsa's Black Wall Street once embodied.

“I just always imagine — what would Greenwood look like if the massacre never happened? We had an economy within an economy,” says Williams. “What could have happened? What would we be?”