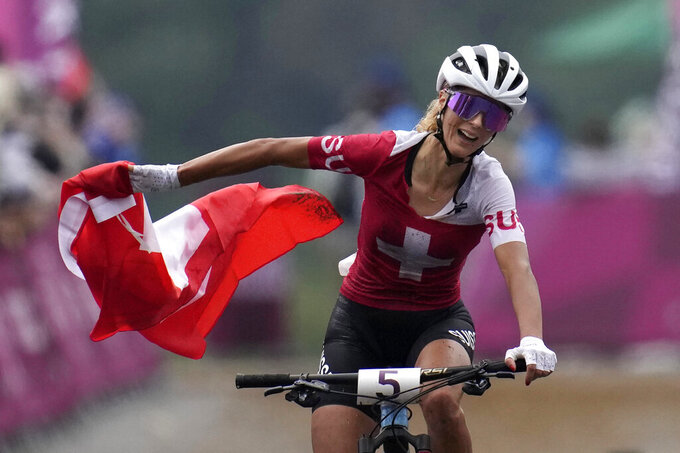 Jolanda Neff of Switzerland celebrates as she crosses the finish lone to win the gold medal during the women's cross-country mountain bike competition at the 2020 Summer Olympics, Tuesday, July 27, 2021, in Izu, Japan. (AP Photo/Christophe Ena)

IZU, Japan (AP) — Jolanda Neff was laid up in a North Carolina hospital room on Christmas Day two years ago, wondering whether a terrible crash during a training ride in the mountains near Asheville would ruin the Swiss cyclist's career.

She had ruptured her spleen so badly that doctors feared she would lose it. She had broken ribs, ruptured her lung. She had so many scratches and bruises that it looked as if Neff had been put through a paper shredder.

No wonder she was fighting back tears after leading a Swiss sweep in mountain biking at the Tokyo Olympics on Tuesday.

“The whole story for me was pretty crazy,” said Neff, flanked on the podium by silver medalist Sina Frei and bronze medalist Linda Indergand. “I had my last big win in 2018 at the World Cup final in La Bresse, and at the test event here in 2019, and that was in fact the last time I did any bike race with spectators.”

The fact that there were a few thousand lining the course Tuesday — COVID-19 protocols barring fans from almost all Olympic venues does not extend to the Shizuoka prefecture — just made her romp through the mud even better.

Neff took the lead when world champion Pauline Ferrand-Prevot crashed on a slippery section of rocks on the first loop in the mountains southwest of Tokyo. She soon built her advantage to more than a minute over a field that included France's Loana Lecomte, the winner of every World Cup race this season, and reigning Olympic champ Jenny Rissveds.

Unlike the men’s race, which took place on a hard-packed layout baked by days of searing sun, the women were greeted by a greasy, mud-splattered mess courtesy of steady early showers cast off approaching Typhoon Nepartek.

The rubble-strewn downhill section that caused Dutch star Mathieu van der Poehl to go catapulting over his handlebars on Saturday had become even more harrowing. The sharp inclines and technical descents were covered in slime. Even the wet tarmac caused tires to spin during a race demanding total focus for more than 20 kilometers.

All of it played into the hands of the Swiss, who were downright giddy over the conditions.

“We had a really big advantage because of the technical course,” Indergand said. “We had the best lines and we knew we could ride our bike so comfortably, so when the rain came in the morning we were all excited to race.”

Despite subtle tweaks in an effort to make the course safer, riders bunched together were still forced to dismount at the first rocky uphill. They looked like mountaineers summiting Mt. Fuji as they scrambled to the top.

Neff and Ferrand-Prevot found themselves neck and neck for the lead on the first of seven loops when the Frenchwoman slipped going up a steep, rocky ramp.

Not only did Ferrand-Prevot have to dive off her bike, the rig skittered away down the rocks and she had to clamber after it, losing five spots and nearly 30 seconds to the race leader.

The advantage Neff gained over second place by the crash only grew as the laps wore on.

Without any pressure behind her, the 28-year-old multidiscipline star was able to choose whatever route she wanted. She easily soared over jumps, picked her way through rock gardens and took her time on the most treacherous sections.

Meanwhile, the 22-year-old Lecomte continued to have trouble. She had to dismount several times over tough climbs, then the winner of the first four World Cup events of the season dropped her chain over some rocks.

Ferrand-Prevot didn’t give up after her early spill, at one point passing Frei and Indergand for second place. But the energy she expended to make up ground cost her and Ferrand-Prevot soon gave her medal spot right back to the Swiss.

Lecomte wound up sixth and Ferrand-Prevot faded to 10th in a disappointing day for the French.

“I still can't believe what happened today,” Frei said. “I think you can always dream, and of course it was a big dream of mine, and yeah, to stand on the podium with two other Swiss girls is just amazing.”