Nets a depleted team heading into NBA's restart at Disney 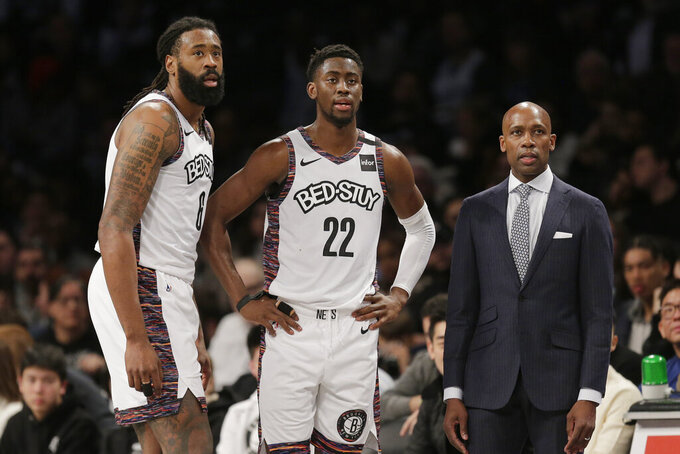 FILE - In this March 8, 2020, file photo, Brooklyn Nets interim head coach Jacque Vaughn, right, talks with Caris LeVert, center, and DeAndre Jordan during the second half of an NBA basketball game against the Chicago Bulls at the Barclays Center in New York. The Nets have a depleted roster as they prepare for the resumption of the NBA season. But despite missing many of their core players, they still have a good chance to make the playoffs in the Eastern Conference. (AP Photo/Seth Wenig, File)

The Brooklyn Nets will always remember being big winners in July 2019.

All they've been doing this July is losing.

Their roster has been as depleted as any in the NBA, with a number of key rotation players not joining them for the restart in Florida.

A year after signing Kevin Durant and Kyrie Irving in one of the landmark moments in the franchise's nomadic history, the Nets will trot out a roster that looks nothing like the one that was on pace for a postseason berth even without those two injured superstars.

“It will not look like previous basketball that you’ve seen for sure,” said Jacque Vaughn, who replaced Kenny Atkinson as coach just days before the season was suspended in March because of the coronavirus pandemic.

The Nets could still make the playoffs but might need contributions from players who aren't well known even to their most passionate fans.

Durant and Irving won't return from their surgeries until next season. Starters Spencer Dinwiddie and DeAndre Jordan both announced they had tested positive for the coronavirus and wouldn't play, and fellow veterans Taurean Prince and Wilson Chandler also are staying home.

Even replacing players they lost proved problematic. Michael Beasley was signed but then tested positive for the virus and isn't joining the team, while Justin Anderson was finally able to this week after he, too, tested positive and had to quarantine.

But Brooklyn is still in good position in the standings. At 30-34, the Nets are seventh in the Eastern Conference and six games clear of ninth-place Washington, which also is in bad shape after losing leading scorer Bradley Beal.

Starting guard Caris LeVert was playing the best basketball of his career in March and returns now with veterans such as Jamal Crawford, Tyler Johnson and Lance Thomas as teammates.

Other things to know about the Nets:

The Nets had only 14 players on the official restart roster announced this week. Jarrett Allen is the lone center and Brooklyn is down to at best its No. 3 option at point guard with the absences of Irving and Dinwiddie. The Nets may try to overcome their deficiencies in size and skill with speed.

“Right now I think just because of the personnel that we have, we’ve got to play a real up-tempo sort of pace,” said swingman Joe Harris, one of the remaining core players.

“We’re a little bit undersized, but we’ve got a lot of quick guards, a lot of guards that can facilitate and get downhill.”

The Nets were playing well when play was suspended. They won their final three games, capped by a 104-102 victory over the Lakers in Los Angeles on March 10. Jordan had moved into the starting lineup for the final two games after Vaughn replaced Atkinson on March 7.

LeVert averaged 27.4 points, 6.4 rebounds and 6.0 assists in the final five games, with a 50-point performance and a triple-double in a four-day span. That began with a career-high 51 points on March 3 in Boston, including 37 in the fourth quarter and overtime to spark a comeback victory. Irving, Vince Carter and Stephon Marbury are the only other players in franchise history with a 50-point game and a triple-double.

The 40-year-old Crawford hadn't played in the NBA this season before being signed as a replacement player, becoming the oldest active player in the league. The three-time Sixth Man of the Year would love to pick up where he left off: He scored 51 points in his most recent NBA appearance, coming off the bench for Phoenix on April 9, 2019.

Vaughn will look to strengthen his chance of keeping the coaching job beyond this season by leading the Nets to a good finish in Disney. He's off to a good start but has a long way to go to match the best performance by a Nets coach to begin his tenure. Lawrence Frank won his first 13 games from Jan. 27 to Feb. 24, 2004, an NBA record for a rookie coach, when he replaced Byron Scott.