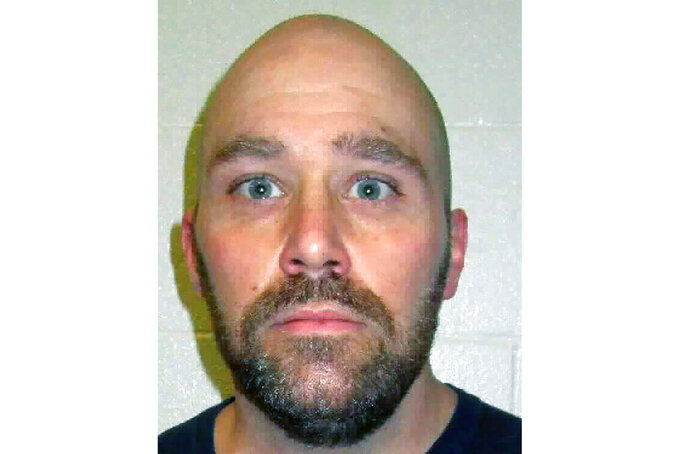 This March 2021 photo provided by the Nevada Department of Corrections shows convicted mass murderer Zane Floyd, 45, an inmate at Ely State Prison. Floyd is mounting a range of legal challenges to a bid to schedule his execution in early June, including questioning whether the district attorney in Las Vegas really wants the lethal injection carried out at a decommissioned prison in Carson City. (Nevada Department of Corrections via AP) 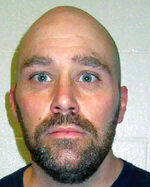 LAS VEGAS (AP) — A convicted Nevada mass murderer is mounting a range of legal challenges to a bid to schedule his execution in early June, including questioning whether the district attorney in Las Vegas really wants the lethal injection carried out at a decommissioned prison in Carson City.

Prosecutor Alexander Chen on Friday said that's a mistake that will be corrected in court filings next week.

Attorneys for Zane Michael Floyd filed new documents this week asking a state court judge to halt the process at least long enough to determine if the state’s lethal injection procedure would be unconstitutionally cruel and inhumane, and to force prisons officials to show they have the three drugs they would use.

“We would add to that the opportunity to present clemency on behalf of our client,” Floyd’s attorney, Brad Levenson, said in an email. “We are indeed litigating in state and federal court on many serious issues.”

One seeks a stay of execution. The other opposes Wolfson's request for Clark County District Judge Michael Villani to issue a warrant to set Floyd’s execution date the week beginning June 7.

The prosecutor's April 15 application for a death warrant specifies that the execution should be “within the limits of the State Prison, located at or near Carson City.”

Villani has scheduled court hearings on May 14.

Floyd, 45, was sentenced in 2000 to die for killing four people with a shotgun and badly wounding a fifth in a Las Vegas supermarket in 1999.

Floyd’s attorneys want a judge to force state Department of Corrections officials to say if they’ve changed a procedure posted in July 2018 for a lethal injection that was later called off; to prove they have the drugs they would use; and to demonstrate that witnesses would not be exposed to COVID-19.

They argue that Floyd, who committed his crimes at age 23, had a diminished mental capacity because his mother used alcohol when she was pregnant, leaving him with a fetal alcohol spectrum disorder.

They also argue that Villani should not hear the case because Floyd was tried and sentenced in 2000 by a different judge in a different Clark County District Court department in Las Vegas, and they want the district attorney disqualified from handling the case because two prosecutors in Wolfson’s office also are state Senate members.

The Democratic-majority Legislature is considering a bill that would repeal the death penalty in Nevada.

The last person put to death in Nevada was Daryl Mack in 2006 at Nevada State Prison in Carson City. Mack had been convicted in a 1988 rape and murder in Reno. He asked for his sentence to be carried out.

Floyd has not volunteered to die and has not given up appeals.

The U.S. Supreme Court has declined to hear Floyd’s case and the 9th U.S. Circuit Court of Appeals in San Francisco rejected his appeal last November.

Levenson now is asking U.S. District Judge Richard Boulware II in Las Vegas to consider whether the three drugs Nevada would use — the sedative diazepam, the powerful synthetic painkiller fentanyl and a paralytic, cisatracurium — would cause a cruel and inhumane death in violation of Floyd’s constitutional rights.

Last week, Floyd's lawyers said that if officials want to execute Floyd they should consider the firing squad as an option — something only three states allow and hasn’t been used in the U.S. since 2010.

Nevada state law requires executions to be by lethal injection.

A state court judge in 2017 called off executing twice-convicted killer Scott Raymond Dozier after hearing evidence that the plan by prison officials to use that same never-before-tried combination might leave Dozier conscious and suffocating in pain but unable to show it. Dozier killed himself in prison in January 2019.