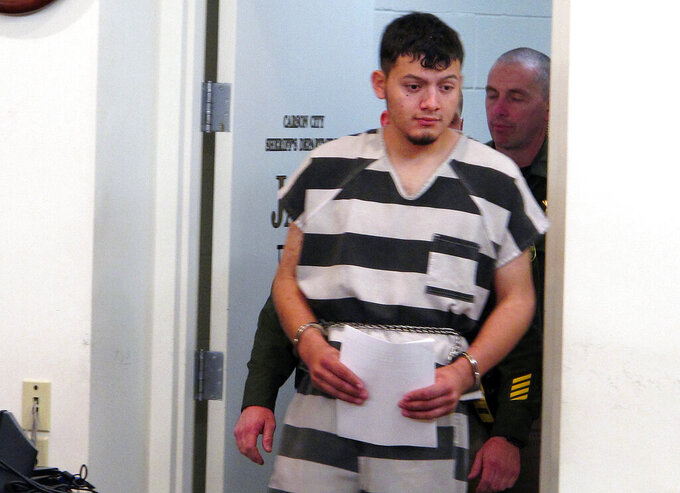 FILE - In this Jan. 24, 2019, file photo, Wilber Ernesto Martinez-Guzman, 19, of El Salvador, is escorted into the courtroom for his initial appearance in Carson City Justice Court in Carson City, Nev. The Nevada Supreme Court struck down a deadline Friday, April 9, 2021, that a district judge set later this month for the Salvadoran immigrant's lawyers to file a motion claiming he's intellectually disabled and therefore can't be executed if convicted of murdering a Reno couple and two other woman. (AP Photo/Scott Sonner, File)

RENO, Nev. (AP) — The Nevada Supreme Court struck down a deadline Friday that a district judge set later this month for a Salvadoran immigrant’s lawyers to file a motion claiming he’s intellectually disabled and therefore can’t be executed if convicted of murdering a Reno couple and two other woman.

Wilber Ernesto Martinez-Guzman, 22, is scheduled to go to trial in Washoe District Court in Reno Sept. 20 on charges he killed all four during an 11-day rampage in two counties in January 2019.

Judge Connie Steinheimer had set an April 20 deadline for his public defenders to file a motion that would trigger evidentiary hearings to determine whether he’s intellectually disabled and ineligible for the death penalty under the U.S. Constitution and Nevada law.

His lawyers say state law requires such motions be filed no later than 10 days before the trial is scheduled to begin. They filed an emergency motion March 29 with the Supreme Court seeking to vacate the deadline and stay the proceedings indefinitely.

The justices granted their request Friday pending further order of the high court.

“We conclude that, on balance, the pertinent factors weigh in favor of a stay,” Chief Justice James Hardesty wrote in the two-page opinion.

The ruling comes as Martinez-Guzman’s lawyers continue to pursue a separate appeal challenging Steinheimer’s rulings that he can be tried for all four killings during a single trial in Reno. They argue the Washoe County grand jury that indicted him had no authority to consider the charges tied to the killings of the Gardnerville women in rural Douglas County.

The justices heard oral arguments from both sides Wednesday. A ruling on that matter is pending.

The trial originally was scheduled to begin last April, but was postponed until August 2020 and then again until next September. It is expected to last up to eight weeks.

Steinheimer said she set the April 20 deadline for any potential motion regarding intellectual disability in an effort to avoid further delay.

The defense team first stated in July 2019 they anticipated filing such a motion.

Deputy Defender John Petty said in their most recent Supreme Court filings the motion hasn’t been filed yet because they have been unable to gather necessary evidence in Martinez-Guzman’s native El Salvador largely because of COVID-19 travel restrictions.

“This court must allow him the opportunity to investigate, collect, analyze and marshal the best and most reliable evidence on his intellectual disability,” Petty wrote.

Prosecutors say it’s a stall tactic that further delays justice for the victims and families at a trial that has already been postponed twice while witnesses’ memories continue to fade.

“If this court grants Guzman’s request for a stay ... it would almost certainly guarantee the lengthy trial continuance Guzman has been unsuccessful in obtaining at the district court level,” prosecution said March 30.

“The case will languish in a stayed capacity in the critical months leading up to the trial date. With each passing day, it is more likely that the other deadlines set by the district court and the trial date become an illusion,” they said.

Washoe County District Attorney Chris Hicks said Steinheimer has made it clear she won’t categorically deny Martinez-Guzman’s motion even if he misses the motion deadline.