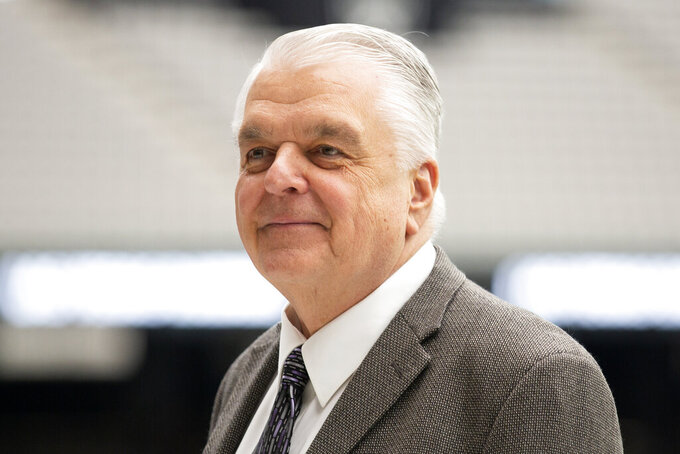 Gov. Steve Sisolak announces a COVID-19 vaccine incentive program, "Vax Nevada Days," in the Twitch Lounge at Allegiant Stadium on Thursday, June 17, 2021, in Las Vegas. The program will automatically enter Nevadans who have had at least one dose of the COVID-19 vaccine into a weekly drawing that offers $5 million in cash and prizes, including a $1 million grand prize. (Ellen Schmidt/Las Vegas Review-Journal via AP)

LAS VEGAS (AP) — A new kind of jackpot is coming to Nevada, the governor said Thursday, but only for state residents who have gotten at least one dose of a coronavirus vaccine.

Gov. Steve Sisolak on Thursday announced a broad effort to encourage reluctant or forgetful residents to get shots, adding his state to a growing list offering unconventional incentives to revive flatlining vaccination programs amid waning demand.

The governor, a Democrat, didn't call it a lottery. He called it “ Vax Nevada Days " and termed the prize program a raffle because entrants aren’t paying to participate and vaccines are free.

The program makes all state residents who have received at least one vaccination since December automatically eligible to receive part of $5 million in prize money. Vaccinated military members in Nevada and their dependents also will be entered to win.

Among almost 2,000 winners, one grand prize winner of $1 million will be announced Aug. 26.

“If people are looking for reason not to get vaccinated, they’re going to come up with one. I’m trying to give people 5 million reasons to get vaccinated,” Sisolak said, referencing the total cash prizes being offered.

“Vax Nevada Days” will be paid for with federal coronavirus relief dollars, he said.

Nevada has about 3.1 million residents. About half the eligible population, or 1.4 million, have received at least one shot of COVID-19 vaccine during mass clinics, pop-up neighborhood sites and walk-in offers at pharmacies.

The number of vaccinations administered daily has plummeted from more than 25,000 in mid-April to under 7,000.

Thursday's announcement on one concourse of Allegiant Stadium came within sight of local health officials hosting a free vaccination clinic on another.

Almost 43% of eligible people statewide have completed inoculations. The numbers are slightly lower in the Las Vegas area, home to about 74% of the state’s population.

Unlike other U.S. states offering prizes to boost vaccinations, Nevada has no lottery. The state's powerful casino industry has historically opposed creating public numbers-based drawings and scratch-off tickets like those offered in retail stores in most states.

The governor said the state attorney general and regulatory Gaming Control Board told him that using a random number generator to pick winners adheres to Nevada law.

Nevada-based International Game Technology will donate its time to conduct drawings using a proprietary random number-generating program like ones it provides for lotteries in other states, company vice president Scott Gunn said.

He said the system will use "an alpha-numeric representation of participants" and the company will not have access to personal identification information. He called the process “secure, random and fully auditable.”

Names are kept with Immunize Nevada, a state agency that books and tracks vaccinations statewide.

Immunize Nevada Executive Director Heidi Parker said the give-away aims to induce more Nevada residents to become vaccinated and include those who have already been immunized.

“This is our way of giving our vaccination efforts an extra boost. We are working hard every day to make it even easier for people in Nevada to get the COVID-19 vaccine,” Parker said.

In other states, prizes offered to encourage vaccinations have ranged from hunting rifles and shotguns in West Virginia to scratch-offs in New York.

In California’s “Vax for the Win” strategy, Gov. Gavin Newsom has used lotto balls and a game show-style spin wheel to pick random vaccinated residents for cash prizes and draw attention to the effort.

The U.S. Centers for Disease Control and Prevention reports that 53% of people nationally have gotten at least one vaccine dose, including 87.1% of people 65 years and older, and 44.5% of all people are fully vaccinated.

Nevada has reported nearly 328,500 confirmed coronavirus cases since March 2020, and 5,642 deaths. The U.S. death toll from COVID-19 hit 600,000 on Tuesday, according to data compiled by Johns Hopkins University.

Sisolak noted that more Nevada residents had received coronavirus vaccines than any other vaccine in the state's history and noted Nevada historically has among the nation’s lowest influenza vaccination rates.

“People in Nevada just have a more of a hesitancy and resistance to getting vaccines, and we knew that going in,” he said.

Department of Health and Human Services data shows Nevada has ordered fewer vaccine doses in recent weeks as the number of people seeking shots has declined.

The department reported that more than 12,700 doses of vaccine have been wasted since March. The numbers reflected doses opened but discarded unused or unusable because of mistakes like dropped vials, improper storage or mishandling. The data did not distinguish between Moderna, Pfizer and Johnson & Johnson products.

Metz reported from Carson City, Nevada, and is a corps member for the Associated Press/Report for America Statehouse News Initiative. Report for America is a nonprofit national service program that places journalists in local newsrooms to report on undercovered issues.