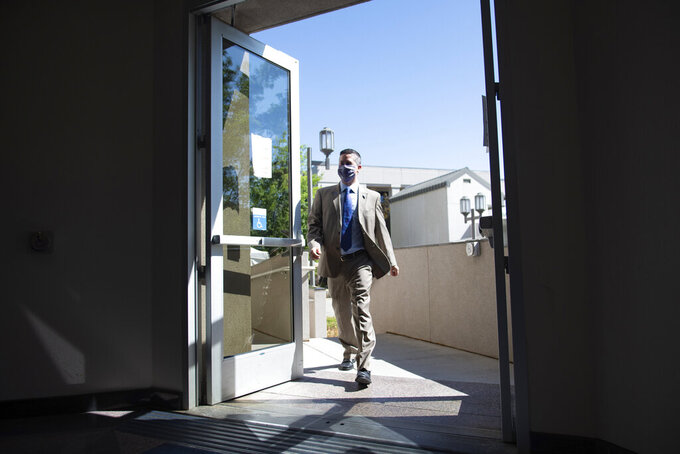 Assemblyman Steve Yeager walks into the Legislature on Wednesday, Aug. 5, 2020, during a special session of the Legislature in Carson City, Nev. (David Calvert/Nevada Independent via AP, Pool)

Combining liability and worker protections in a single bill jumbled traditional partisan divides and left neither Republicans nor Democrats satisfied with the final outcome.

“I don’t know that there’s a single person who thought this was a perfect deal,” Assembly Speaker Jason Frierson said after the bill's passage late Wednesday night.

If Sisolak signs it as expected, Nevada will join more than a dozen states that have passed laws to protect businesses from personal injury and wrongful death claims amid the pandemic.

Republicans and Democrats who backed the bill said conditioning liability protections on adherence to health directives would help businesses reopen safely without endangering Nevada's tourism industry and its reputation as a premier destination.

The bill grants legal immunity to most businesses, nonprofits and government agencies as long as they follow health standards set by local, state and federal authorities and don’t exhibit “gross negligence." Lawmakers ultimately carved out hospitals, nursing homes and K-12 schools from the bill's liability protections, earning praise from those worried about the safety conditions in schools and nursing homes, but scorn from hospital and school district administrators.

The bill’s worker protection provisions mirror a proposal put forth by Nevada's powerful Culinary Union Local 226 ahead of the session in honor of Adolfo Fernandez, a Caesars Palace porter who died from COVID-19 complications in late June. It requires health officials in Clark and Washoe County to mandate that casinos, resorts and hotels offer testing and time off to employees exposed to coronavirus in the Reno and Las Vegas areas, and sets baseline cleaning standards for bars, hotel rooms, restrooms and elevators.

After Brin Gibson, Sisolak’s general counsel, said the final bill reflected a deal reached by “some of the most important members of Nevada’s economy” and cautioned that amendments could jeopardize their support, lawmakers from both parties slammed provisions that selectively exempted certain workers and businesses from protections.

Sen. Scott Hammond, R-Las Vegas, voted for the bill because of the protections it offers businesses, but said exemptions amounted to “picking winners and losers.” He protested a final-hour amendment that exempted schools because he said exposure to liability would make reopening schools more difficult and, in turn, hurt students.

Teachers' union representatives said the threat of liability would force schools to only reopen when safe for students, teachers and support staff.

“If there is immunity, there is no incentive to ensure these classrooms, buildings, campus, and buses are safe ... We believe removing immunity from schools forces districts to adopt a safety and testing program,” Clark County Education Association President John Vellardita said.

“Despite the fact that there have been an average of 1,050 cases per day over the past week, this body is debating how to make it easier for corporations to endanger worker’s health and the public’s health,” said Hugh Baran, an attorney with the National Employment Law Project.

Assemblywoman Selena Torres, D-Las Vegas, voted against the bill because she said she couldn’t support shielding businesses from liability without expanding workplace protections to frontline workers like grocery store clerks, instead of mainly to the hotels and casinos that employ Culinary Union members.

“I am concerned that these employees are not going to get the same benefits as other members of our community,” she said.

Health officials from the Reno and Las Vegas areas opposed the bill and said they weren't consulted on how it might affect their ability to manage the pandemic. Washoe County Health Officer Kevin Dick protested how local health officials will have to expand inspection and enforcement efforts until Sisolak's emergency directives are lifted, even though the federal relief dollars set to fund the efforts must be spent by the end of the year.

"It’s just another burden being placed upon the health district while we are already over-extended in our response to COVID-19,” Dick said Wednesday afternoon.