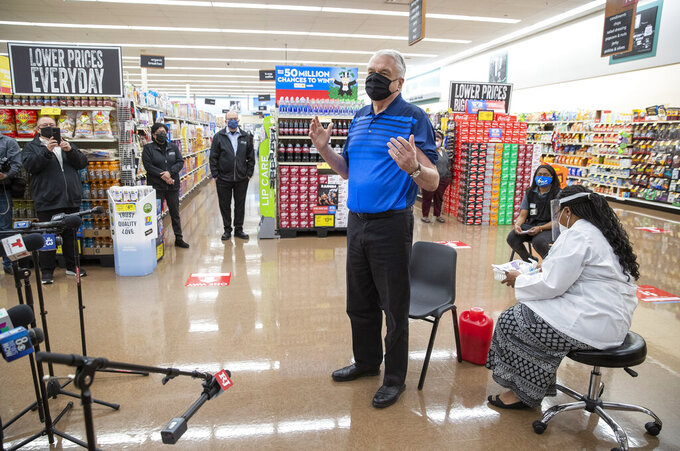 FILE - In this March 11, 2021, file photo, Nevada Gov. Steve Sisolak speaks with reporters after getting a COVID-19 vaccine at a supermarket pharmacy in Las Vegas. Gov. Sisolak's June 1 date for fully reopening Nevada drew a rapid response to reopen legal brothels in one county — and a blunt question to the the state's COVID-19 Task Force about cause-and-effect. (Steve Marcus/Las Vegas Sun via AP, File)

LAS VEGAS (AP) — Gov. Steve Sisolak’s June 1 date for fully reopening Nevada, with face coverings required, drew a rapid response to reopen legal brothels in Lyon County — and a blunt question from that county's chief administrator about cause and effect.

“We’re very concerned about, ‘What happens if?’ ” Lyon County Manager Jeff Page said of concerns that coronavirus cases and deaths will spike. “It was hard enough in March of 2020 to do what we did. And if we have to go back to that, it’s going to be even more difficult. What does that look like?"

The Democratic governor should identify “trigger points” for a return to restrictions, Page told members of the governor’s COVID-19 Response Task Force, even as he signaled that lawmakers in his rural Republican northern Nevada county were eager to buck restrictions.

Brothels will be allowed to open May 1 in Lyon County, Page said, after county commissioners voted 4-1 early Wednesday to let “everything” open May 1 — “100%, with face masks being required,” Page said. There will be no restrictions on the size of public gatherings, he said.

Nevada is the only state in the U.S. with legal brothels — allowed only in rural counties that want them, not in Las Vegas or the Reno area. They have been shuttered since Sisolak ordered most non-essential businesses closed in mid-March 2020 to prevent people from meeting and spreading COVID-19.

Sisolak has drawn political fire for declaring his June 1 target date the night before his coronavirus oversight panel began considering proposals from Nevada's 17 counties to assume control of pandemic mitigation measures beginning May 1.

Task Force chief Caleb Cage and state biostatistician Kyra Morgan underscored Page’s question with an acknowledgment that Sisolak and state officials were balancing the economic effects of limiting businesses with predictions that coronavirus case numbers will rise once everything reopens.

“I just want to the expectation to be realistic that we will see an increase in cases when counties return capacities to 100%,” Morgan said.

“We know the numbers are going to increase,” said Cage, adding that no one knows whether hospitalizations and deaths might again reach the peak levels reached in December and January.

There are “no specific triggers,” Cage said. But, “It is our intent and our wish and our hope ... to keep the state open and not go back to the mitigation measures that we’ve seen."

"We’d like to continue to responsibly reopen the state and make sure that we can keep it open,” he said.

Nevada health officials on Wednesday reported 14 new deaths and 395 more known COVID-19 cases, bringing the number of cases since the pandemic began to 309,150 and the number of Nevadans who have died to 5,353.

A two-week measure of the percentage of people tested and found to have COVID-19 ticked up again, to 5.4% statewide, topping the World Health Organization goal of 5% for relaxing coronavirus restrictions. So-called test positivity figures were 9.3% in Carson City and 8.2% in Douglas County.

Morgan, the statistician, said the data could reflect less demand for tests among people who have been vaccinated, and people seeking tests once they already have flu-like symptoms.

Page, who has been his northern Nevada county’s emergency manager since 1999, vented frustration about public perceptions of the coronavirus fight and offered qualified praise for the task force's role overseeing county-by-county efforts to stem the pandemic that arrived in Nevada 13 months ago.

That’s why, Page said, he asked his questions about trigger points.