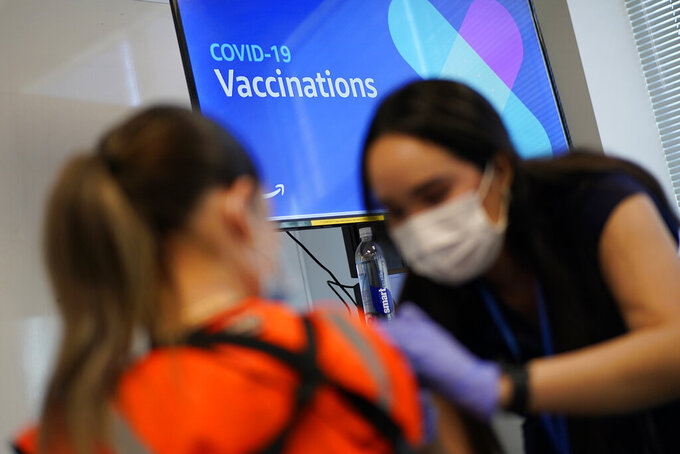 FILE - In this March 31, 2021, registered nurse Sofia Mercado, right, administers a COVID-19 vaccine at a vaccination event for workers at an Amazon Fulfillment Center in North Las Vegas, Nev. Nevada health officials are redoubling efforts to make it easier to get COVID-19 shots — with new drive-thru clinics in working-class neighborhoods in Las Vegas and expanded outreach to Reno's Hispanic community — to try to reverse a decline in vaccinations statewide. (AP Photo/John Locher, File)

RENO, Nev. (AP) — Nevada health officials are redoubling efforts to make it easier to get COVID-19 shots — with new drive-thru clinics in working-class neighborhoods in Las Vegas and expanded outreach to Reno’s Hispanic community — to try to reverse a decline in vaccinations statewide.

Down 31% since April 15, the 14-day rolling average in the number of vaccine doses administered on a daily basis in Nevada dropped from a record-high of 25,331 on April 14 to 17,436 as of Sunday, the state reported on Monday.

It’s the lowest average rate of daily vaccinations since early March and the first time it’s dropped below 18,000 since March 10.

“I think we expected to see this gradual decline of daily immunizations administered," said Karissa Loper, chief of the state Bureau of Child, Family & Community Wellness. "We need to work further with our communities in Nevada to ensure equity and inclusion and broad distribution for the vaccine.”

Health officials said Monday that 44.3% of the statewide population 16 and older have initiated vaccination and 30.5% are fully vaccinated.

Nevada was averaging fewer than 2,000 daily doses in early January but topped 10,000 for the first time Jan. 29 and cleared the 20,000 mark March 22. Since then, it had been on a steady rise until the downward trend began April 15.

Health experts say it’s difficult to measure the extent the 11-day pause on use of the Johnson & Johnson vaccine impacted turnout for shots. The state resumed use of the inventory on Friday in accordance with federal recommendations after a temporary halt over a rare risk of blood clot.

"We can’t tie a specific number ratio or any other quantifying factor to the Johnson issue,” he said Friday before the pause was lifted.

“Understandably, that is concerning to some folks," he told reporters. “We’re also reaching a point in our campaign that the people who were eager to get the vaccine have done so.”

Black said now, officials are reaching out to groups that might be reluctant or hesitant, as well as those who are concerned about side effects and getting appointments.

Loper said they plan further cooperation with the Mexican consulate based in Las Vegas, who helped organize a clinic in Reno Saturday, and others “to ensure Nevadans know where and when they can get vaccinated.”

“We’ll work with our university and other partners to further survey information and understand where the hesitancy is and what we need to do to get to more Nevadans and reach them in convenient locations,” Loper said.

MGM Resorts International brought in NFL Hall of Fame tackle Anthony Munoz to host a Monday event with employees at the Bellagio to promote vaccine awareness.

The health district in Las Vegas is partnering with Station Casinos to set up a shot clinic at its casino northwest of Las Vegas from May 11-June 14. It’s also scheduled five day-long clinics at recreation and community centers, a mobile home park and a civic center in the mining town of Searchlight, about an hour south of Las Vegas.

Those include three zip codes that rank among the county's top 10 in cases of COVID-19, beginning April 27-28 at a recreation center on South Hollywood Boulevard in the neighborhood with Clark County’s highest rate of positive cases at 15,322 per 100,000 residents.

“We want to bring the vaccine closer to the neighborhoods,” said Dr. Fermin Leguen, the health district officer.

Cassell said the hope is that the drive-thru will appeal to people as an easier option.

The Washoe County health district has seen a slight decline in demand at its main vaccination site in Reno.

“What I can’t attribute that to is whether or not it’s a lack of interest in the vaccine or if, because there are more options to be vaccinated, these individuals have gone somewhere else,” said James English, head of the vaccination effort in northern Nevada. He noted there have been no concerns, waning need or fewer requests because of the J&J vaccine.

“We are still filing our pods. We’re just not filing them at the lightning speed we originally were,” he said Friday.

English said the district’s goal is to begin offering the J&J vaccine once a week. He said they plan to target its vaccination effort for homebound residents with that one-dose vaccine and are calling those who were scheduled to receive Pfizer to see if they want to switch to J&J.

The state’s mobile vaccination units focusing on rural areas and tribal reservations will be equipped with both Pfizer and J&J when it stops Tuesday in Carlin and at the Paiute reservation in Fallon, officials said.