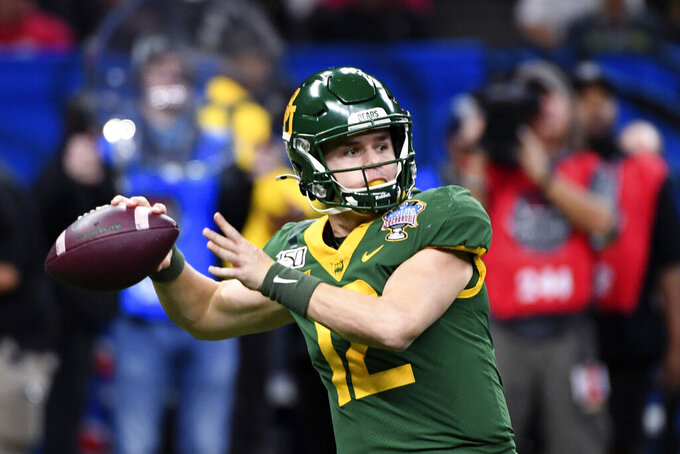 FILE - Baylor quarterback Charlie Brewer (12) passes in the first half of the Sugar Bowl NCAA college football game in New Orleans, Wednesday, Jan. 1, 2020. Brewer and Baylor took the Sooners to overtime in last year's title game, though the tough-minded quarterback didn't play after halftime following a hard hit he delivered on a defender on a running play before taking a hard sack. (AP Photo/Bill Feig, File)

Baylor quarterback Charlie Brewer never spent a lot of time thinking about how beat up he was at the end of last season after a tough finish for the Bears.

But he just might slide a little more in his fourth year as the Baylor starter, when the Big 12 runner-up Bears hope to get a step farther with new coach Dave Aranda after he was part of a national championship last season.

“I'm not going to be asked to do kind of the same stuff I was asked to do last year, so I think the system is going to protect me a little bit in that way,” Brewer said. “Obviously I could be smarter at times and go out of bounds, or slide and not take the hit. I’ve probably heard that a million times now.”

Led by their hard-nosed quarterback, who threw for 3,161 yards and 21 touchdowns while running for another 11 scores, the Bears last year got to their first Big 12 championship game. They lost in overtime to Oklahoma, the only team that beat them in the regular season, though Brewer didn't play after halftime of the title game. He sustained a concussion after he delivered his own blow on a defender to finish a running play, and later took a hard sack.

Brewer's final play of the season came when he took a late hit that left him on the ground for several minutes after running toward the sideline in the fourth quarter of a Sugar Bowl loss to Georgia.

Days after the Sugar Bowl, the Bears lost coach Matt Rhule to the NFL's Carolina Panthers. He had taken Baylor from a 1-11 record in his 2017 debut to 11 wins last season.

Aranda, a first-time head coach, was the defensive coordinator for LSU's 15-0 national championship team. His staff in Waco, Texas, includes new offensive coordinator Larry Fedora, who long before being head coach at Southern Miss and North Carolina was a Baylor assistant from 1991-96, and who has gotten well-acquainted with his new quarterback.

"The thing that I can tell you is football is extremely important to him. He wants to know everything about what we’re doing," Fedora said of Brewer. “He’s got great football savvy. ... He's a heck of a leader. He does not want to let anybody down.”

Among seven returning starters on offense are four offensive linemen, a group that wants to improve after allowing 38 sacks last season.

“That’s always a big topic," junior left tackle Connor Galvin said. “We’re trying to keep him up and safe and playing for as long as possible."

Galvin said the changes in the new offense and with new line coach Joe Wickline are subtle, mostly small techniques and terminology.

JACK IS A KING

Baylor will no longer solely employ a three-man defensive front, not with the Jack position, which can be an outside linebacker one play and a defensive end the next. Arkansas State transfer William Bradley-King, an All-Sun Belt Conference pick last year with 8 1/2 sacks, is the projected starting Jack. Junior middle linebacker Terrel Bernard, the Bears' top tackler with 112 last year, said changing fronts and extra movement should free up linebackers to make even more plays.

The coronavirus pandemic hit before the Bears were able to start spring practice under Aranda. There was classroom work before that and Zoom calls when everyone was away from campus, but time on the field together has been a huge step for everybody.

“I think the gelling and the coming together has happened both player-wise and coaches-wise. It’s the first time we’ve been on the field coaching together,” Aranda said. “Before, it’s one thing to be in sweats, maybe you’ve got a clean shirt on and you’ve turned on the light and you’re in the Zoom call. ... All the stuff that the Zoom meetings were talking about, now you’ve got to live it."

Baylor was supposed to open at the home of the NFL’s Houston Texans against Ole Miss, a team Aranda was familiar with at LSU. That went away when the SEC opted to play only conference games and the Big 12 chose a plus-one model with only one nonconference game that had to be at home. The Bears moved up a home game against Louisiana Tech to be their opener Sept. 12. The Bulldogs, who beat Miami to start last season, had been scheduled to visit Waco on Sept. 26, now the opening day of Big 12 play.