New coach, new QB could have BC breaking out of ACC pack 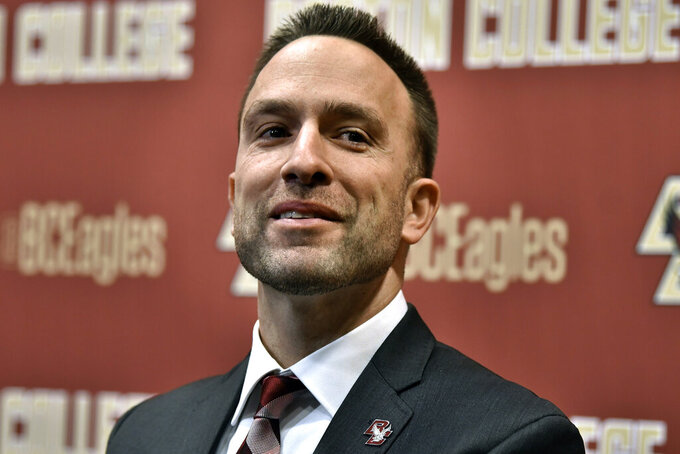 FILE - In this Dec. 16, 2019, file photo, Jeff Hafley speaks at a news conference where he was introduced as the new NCAA college football head coach at Boston College in Boston. The former Ohio State assistant took over in January 2020, and had just a couple of months to get settled before the coronavirus pandemic shut the school down. (AP Photo/Josh Reynolds, File)

BOSTON (AP) — Jeff Hafley’s first year at Boston College won’t be anything like he expected. Maybe the new Eagles coach can have some surprises for the Atlantic Coast Conference, too.

The former Ohio State assistant took over in Chestnut Hill in January -- a move that had to wait until the Buckeyes lost to Clemson in the national semifinal -- and had just a couple of months to get settled before the coronavirus pandemic shut the school down. BC only had five spring practices -- a problem everywhere, but an extra challenge for a first-time head coach in a new place.

“Our players feel safe. And our players want to play. My job is to coach them the best that I can, as hard as I can and make them feel as safe as they can,” Hafley said this spring.

“Going through all of this, and seeing how hard it’s been for our players and seeing how our players have responded, makes me realize even more what a great decision I made coming here, and how excited I am to be the coach here.”

The program that went 44-44 in seven seasons under Steve Addazio got a boost when Notre Dame transfer Phil Jurkovec was granted an immediate eligibility waiver by the NCAA.

One of the most successful players in Pennsylvania high school football history, Jurkovec is expected to be an upgrade over Dennis Grosel, who started the last six games last season after Anthony Brown was injured. Brown, who finished two of his three seasons with an injury, transferred to Oregon.

Jurkovec completed 12 of 16 passes for 222 yards and two touchdowns and also rushed for 130 yards playing in six games — including the Nov. 23 matchup with BC — as a backup for the Irish in 2019. He has three seasons of eligibility remaining.

“I knew it has been a weight on his shoulders,” Hafley said. “He’s been here since January, and he’s been patiently waiting to see if they’ll be able to play football. So that’s one of the moments as a coach, you really look forward to deliver the message. There were times when I’m sure he was frustrated.”

Hafley also landed defensive end Luc Bequette as a graduate transfer from California. As a three-year starter, he had 130 total tackles, 12.5 for loss, 10 sacks, and four forced fumbles.

After three straight 1,000-yard seasons, A.J. Dillon left for the NFL, where he was drafted in the second round by the Green Bay Packers. His workload is expected to be picked up by David Bailey, a 236-pound junior who averaged 5.7 yards per carry while sharing time with Dillon last season.

Boston College was No. 122 in the nation in pass defense last year. That’s one of Hafley’s specialties.

While on Dave Wannstedt’s staff at Pittsburgh, Hafley worked with Darrelle Revis; he also worked with Richard Sherman while an assistant with the San Francisco 49ers.

In Columbus, he took over a defense that was 11th in the Big Ten -- and 86th in the nation -- in passing yards allowed in 2018 and had them No. 1 in Division I last season. The Buckeyes also led the nation in passing efficiency and total yards allowed per game in 2019.

The school is proceeding with in-person classes, blanket testing of students and staff on their return followed by asymptomatic surveillance testing during the year. When the football team reported in July, one of 93 players tested positive; on Aug. 1, the school announced that all 154 of the players and staff tested negative.

The schedule shuffle didn’t work out too badly for BC, which added a home game against Notre Dame on Nov. 14. Their game against Clemson, which had been planned for Chestnut Hill, will be on the road instead. Nonconference games against Ohio, Kansas, Purdue and Holy Cross were replaced by just one, against Texas State on Sept. 26.

Fans will not be allowed at Alumni Stadium at least through September. The state’s reopening plan would not allow large gatherings until Phase 4, which would require a treatment or vaccine.

They are scheduled to open at Duke on Sept. 19.