New coach using NHL stoppage to study up on his Predators 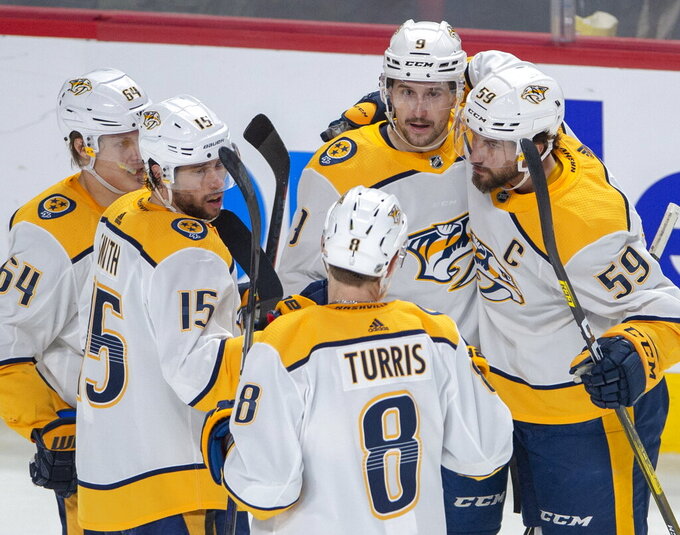 Nashville Predators left wing Filip Forsberg (9) celebrates with teammates after against the Montreal Canadiens during the second period of an NHL hockey game Tuesday, March 10, 2020, in Montreal. (Ryan Remiorz/The Canadian Press via AP)

NASHVILLE, Tenn. (AP) — John Hynes has only been head coach of the Nashville Predators since early January, so he's trying to make up for some lost time with the NHL paused for the coronavirus pandemic and also make sure they're ready whenever hockey resumes.

A big part of that has been getting to know each of his Predators much, much better.

“We've gone through every single player,” Hynes told reporters Monday. “We've got a written report on everyone's strengths, weaknesses, areas of improvement, what type of person they are, what type of player they are, how they fit in our culture. We've done an extensive evaluation collectively as a group on our players.”

The Predators hired Hynes on Jan. 7 to replace Peter Laviolette in this franchise's first midseason coaching change. He was introduced only hours before a 6-2 loss to Boston.

Predators general manager David Poile made the move with Nashville (19-15-7) having lost four of five games and 11th in the Western Conference standings with 45 points.

When the NHL play stopped March 12, the Predators flew home from Toronto with a record of 35-26-8 and 78 points holding the second wild-card spot in the West. They went 6-3-1 over their last 10 games, winning three straight before the stoppage.

“We were going in the right direction right before the pause, and I think one of the biggest things it was always going to be fairly difficult I think to get tactically exactly where you want to be coming in midseason,” Hynes said.

Hynes has taken some time to get settled in his new Nashville home. His wife and three daughters have been able to join him from New Jersey where they lived before the Devils fired him Dec. 3.

Hynes said coaches can always work, they're just staying busy remotely. He talks daily by phone with Poile, who stays in touch with NHL officials. Hynes also has had video conference calls with the team's management group and coaches with the franchise's AHL affiliate in Milwaukee and also hockey operations. He has two conference calls a week with his coaching staff and is on an hour-long call with other NHL coaches three times a week.

“It’s almost been like a regular work day during the week,” Hynes said. “It’s just in a different way.”

Nashville coaches also check in weekly with five Predators each, rotating the coach each week. Hynes said they're trying to give players space while also staying in communication. A team-wide call with staff and players was scheduled for Monday night.

Aside from scouting each player, Hynes has been talking with his assistants planning for a possible short training camp if this season is finished on the ice. Even though special teams improved over the last three games, Nashville still ranks only 24th on the power play and 29th on the penalty kill. That's why Hynes and his assistants are scouting other teams.

“We want to make sure when we do come back we're better, we're prepared and we're ready to help our team be successful and make sure that we're certainly prepared to give our players the best chance to compete,” Hynes said.