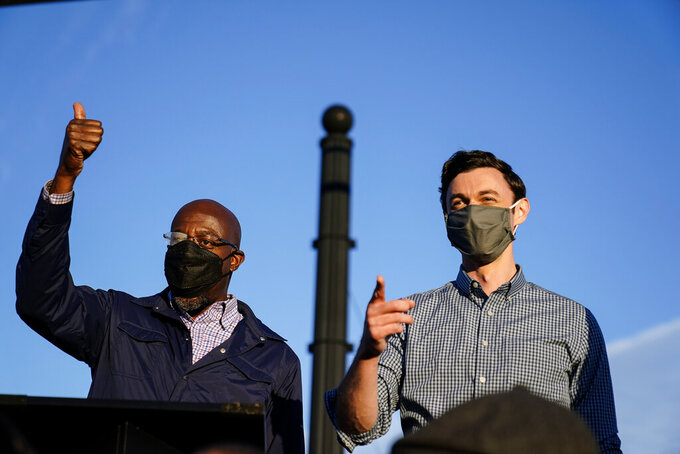 ATLANTA (AP) — Six months after his death, the late civil rights leader and longtime Georgia congressman John Lewis will retain a palpable influence in Congress: The state’s two new Democratic U.S. senators — both personal friends and admirers — promise to carry on his legacy.

Sen. Raphael Warnock was Lewis’ pastor and stood at his bedside before Lewis died. Sen. Jon Ossoff, the Senate’s youngest current member, served as an intern in Lewis’ Washington office years ago. Both were sworn into office Wednesday.

Their victories have already brought about significant change. Warnock is Georgia’s first Black senator, and Ossoff is the first Jewish senator from the state. Together, their election victories swung control of the Senate to Democrats.

Stacey Abrams, a Democrat who narrowly lost the nationally watched race for Georgia governor in 2018, said in a statement to The Associated Press that Warnock and Ossoff represent Lewis’ legacy in the Senate “as champions of civil rights, human rights and voting rights."

“Congressman Lewis is irreplaceable,” Abrams wrote. "However, Georgians gave America the opportunity to pass sweeping reforms that will strengthen our democracy and commemorate his fight for all.”

Both of the newly minted senators have pledged to pursue legislation to expand and protect voting rights, a cause that Lewis championed for most of his life. Democrats and their supporters are hopeful that their newfound control of the White House and Congress could mean voting protections previously stalled by a GOP-led Senate could receive quick passage.

Chief among those is a bill passed by the House in 2019 that has since been renamed after Lewis. It seeks to restore portions of the Voting Rights Act of 1965 struck down by the U.S. Supreme Court in 2013.

The ruling in Shelby County v. Holder ended a requirement that jurisdictions with a history of discriminatory voting practices receive preclearance from the federal government for any changes to voting procedures. Democrats and voting rights groups argue that the ruling has led to a cascade of changes in many states that have disenfranchised voters, including polling place closures.

In a news conference Thursday, House Speaker Nancy Pelosi identified the legislation as a top priority and said she was optimistic about its prospects.

That said, the Senate could have its hands full with the impending impeachment trial of former President Donald Trump, as well as consideration of appointments by President Joe Biden and his early legislative proposals, including a $1.9 trillion coronavirus plan.

Lewis died in July at the age of 80 after battling pancreatic cancer. He served in the House for 33 years representing Georgia’s 5th Congressional District, which includes most of Atlanta.

Lewis became a key player in the civil rights movement as a young man in the 1960s. He helped found the Student Nonviolent Coordinating Committee, was among the original Freedom Riders who challenged segregated bus terminals in the South, and was the youngest person to speak at the March on Washington in 1963.

Most associated with the pursuit to secure and protect voting rights, Lewis led protesters in the 1965 Bloody Sunday march across the Edmund Pettus Bridge in Selma, Alabama, where he had his skull fractured by police, and was a driving force behind voting rights laws in the U.S. for decades.

Lewis was a parishioner of Warnock's for years at the historic Ebenezer Baptist Church in Atlanta where the Rev. Martin Luther King Jr. preached and Warnock remains pastor. Warnock was called to Lewis' bedside days before his death and presided over his funeral service.

“Today the world lost a giant. I lost a mentor, a church member and a friend," Warnock said in a tweet shortly after Lewis' death. “In his youth, John Lewis wrestled with a call to ministry. But instead of preaching sermons, he became a sermon for all the world to see.”

Ossoff first met Lewis when, as a teenager, he was inspired by Lewis' book “Walking With the Wind” and wrote him a letter. “I was so inspired by how a person so young had taken a leadership role in the pursuit of justice and confronting the abuse of power, and was just in awe of his life,” Ossoff said in an interview with The Associated Press in December. Lewis wrote back and invited Ossoff to come work in his office for a few months, spawning a yearslong relationship between the two.

Lewis' early endorsement of Ossoff helped him defeat a challenger with far more experience in elected office to clinch the Democratic nomination for Senate.

Warnock and Ossoff defeated Republican incumbents Kelly Loeffler and David Perdue, who both ran on fealty to Trump, in a runoff election on Jan. 5. They are the first Democrats to win a U.S. Senate election in Georgia since 2000.

On the night of the election, as the Democrats’ leads became clear, members of Congress who worked alongside Lewis paid tribute to the late congressman, saying he laid the groundwork for the victories.

“My friend John Lewis planted the foundation of this Georgia over his career,” Democratic Rep. Bill Pascrell of New Jersey said in a tweet. “I wish he were here tonight to watch this.”