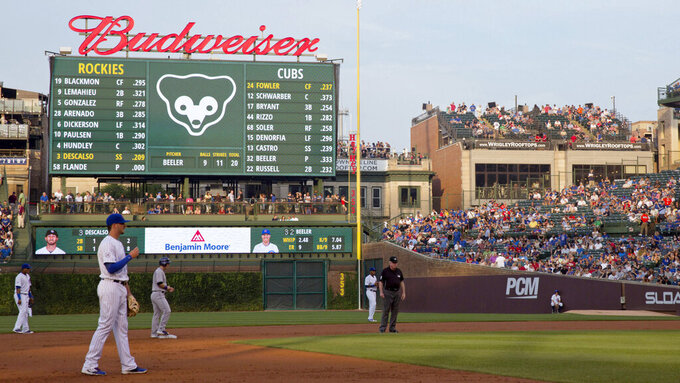 FILE - In this July 28, 2015, file photo, fans at a Wrigley Rooftops' building down the right-field line outside Wrigley Field watch players during the first inning of a baseball game between the Colorado Rockies and Chicago Cubs in Chicago. This week, Major League Baseball players and owners reached an agreement to play an abbreviated, 60-game season that would start July 23 or 24 in teams’ home ballparks. But the seats will be empty. Instead, fans hoping to see a game in person will be have to settle for pressing their faces up against hotel windows, squinting through metal grates or climb to rooftops when baseball returns this month in otherwise empty stadiums. (AP Photo/Andrew A. Nelles, File) 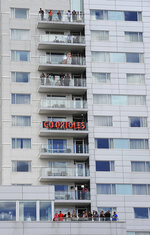 BOSTON (AP) — Tucked under the center field seats at Fenway Park, down some stairs from Lansdowne Street in an area previously used as the visiting team’s batting cage, is a sports bar that is preparing to reopen from the coronavirus shutdown.

Largely windowless and decorated with sepia photographs hung on dark wooden walls, the main source of light is the sunshine streaming in through a thick metal screen that reveals the true treasure of the location: a view of the Boston Red Sox field, from Green Monster to Pesky Pole, that could make the Bleacher Bar one of the few spots to watch a major league game in person this season.

“It’s one of a kind. It really is,” said Joe Hicks, who runs the restaurant and three others in the area. “Kids and families, they get excited when they walk in here and they see how cool this is. People, they walk in and they’re just naturally happy.

“Being able to see inside the park, it doesn’t get much better than that.”

Major League Baseball suspended spring training on March 12, and the season that was scheduled to open on March 26 never did. Last week, players and owners reached an agreement to play an abbreviated, 60-game season that would start July 23 or 24 in teams’ home ballparks.

But they’re not yet ready to crowd the seats with tens of thousands of fans.

Instead, those hoping to see a game in person may have to settle for places like the Bleacher Bar, the Rogers Centre hotel or the Wrigley rooftops, pressing their face up to the windows or squinting through fences like the Knothole Gangs of yore.

The Roberto Clemente Bridge provides a look into PNC Park and a hotel in Baltimore might offer rooms with a view of the field at Camden Yards.

“There is some irony in the fact that the kind of social areas that we’ve created in baseball parks may end up being the key to the social distancing that may be required when we do see the sport again,” baseball architect Janet Marie Smith said. “I think there’s some, yeah, some sort of cruel irony in that.”

Smith, who helped build the paradigm-shifting Camden Yards and worked on renovations for Dodger Stadium and Fenway, said ballpark designers have tried to find new ways to connect with their urban surroundings after moving back from the suburbs in the 1990s.

The result: a picnic area in San Diego, a waterfront promenade in San Francisco, a street plaza in Baltimore, a nightclub in Miami.

And now those new knotholes could be a foot in the door for fans if teams and government officials deem them safe to open before the actual seating bowls.

“We’re seeing that the mixture of uses bode well for a lot of situations,” Smith said. “We weren’t looking for this one, for sure. But it does allow one to tiptoe back in and have a lighter touch than the traditional way of thinking of a stadium or ballpark with all fixed seating.”

Most teams contacted by The Associated Press last week said they were following guidance from local officials on whether fans would be allowed to watch games from these areas. In many states, a key distinction is whether they are designed for ticketed fans or outside the turnstiles; in Massachusetts, for example, the Bleacher Bar can reopen as a restaurant even while Fenway and other large arenas remain closed.

The Toronto Marriott City Centre is awaiting word from the Blue Jays on whether it can rent out the 70 rooms with perfect views of the field, general manager Anup Israni said. (As of Friday, the hotel had “Baseball Stadium view” rooms available for booking for late July and into August.)

A Chicago Cubs spokesman said it has not been decided if the rooftops along Waveland and Sheffield Avenues will be open.

San Francisco’s Portwalk, a promenade next to McCovey Cove that has views into Oracle Park, will remain closed, a Giants spokeswoman said. Kayakers are still hoping to paddle around, scrambling for splash shots.

The Clevelander Marlins Park, a nightclub with a swimming pool beyond the left field fence in Miami, also will not open, the team said. The San Diego Padres said the Park at the Park, a ticketed grassy area beyond the center field fence, will be closed for the regular season; it will be open for the spring training reboot, though, with fans required to social distance.

Eutaw Street, which runs beyond the right field wall in Baltimore, helped popularize the trend toward seatless viewing areas. On game days, it is typically filled with fans who hawk for home runs or purchase sandwiches at Boog’s BBQ.

But it is inside the Camden Yards gates, and it will remain closed, the team said. It was also off limits when the Orioles played a game without fans in 2015 because of protests over Freddie Gray’s death in police custody -- until now, the only major league game played without fans in the ballpark.

Some resourceful Orioles fans watched that game by crowding onto balconies at the Hilton Baltimore Inner Harbor, which offers a mostly unobstructed but distant view of the field. (For now, the hotel is closed because of COVID-19 and is not taking reservations until July 14 at the earliest, a Hilton Hotels spokesman said.)

Boston Mayor Marty Walsh has ruled out fans in the Fenway seats through at least August.

“I just anticipate it being extremely odd when we get going playing Major League Baseball games in front of no fans, it being a strange environment,” Red Sox president Sam Kennedy said this week.

“I think it’s incredibly important that we start -- when it’s safe -- to try to get back to some sense of normalcy,” he said. “For me, that has always been going to baseball games. I think our fans want that and, ultimately, our players want that.”

In Massachusetts, restaurants like the Bleacher Bar can open with limited capacity starting June 30. Last week, the tables had already been rearranged to accommodate the social distancing requirements; the three tables with the best view of the field were now two.

Hicks, the Bleacher Bar director of operations, was talking to a reporter when a mother and her two sons popped their heads in to check the place out. Their brief glimpse through the screen will be their only chance to see the field before returning home to Naples, Florida.

“We’re actually big Yankees fans but we always wanted to see Fenway Park because it’s the oldest park, it’s like the most legendary park in the world,” 17-year-old Sebastian Bustamante said.

“The Yankees were supposed to do good things this year, so I was really looking forward to that,” he said. “Aside from that, I just love watching baseball. It’s going to not be the same not watching it in person, but hopefully we’ll be able to catch some games on TV.”