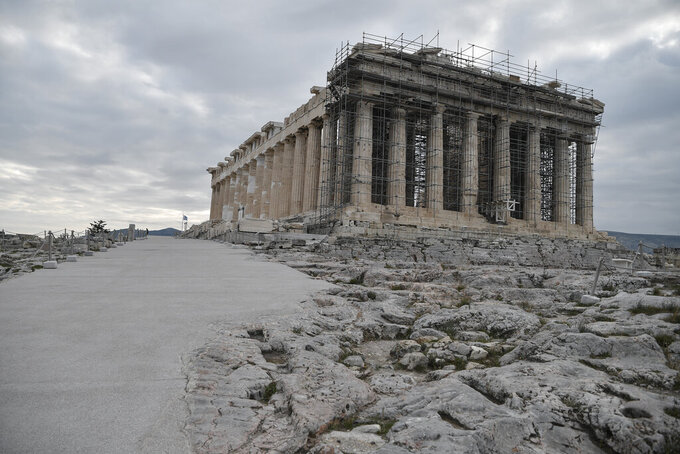 A view of the restorated path in front of the ancient Parthenon temple at the Acropolis hill, in Athens, Thursday, Dec. 3, 2020. Acropolis became fully accessible for people with disabilities after a restoration of the pathways and the inauguration of a new elevator. (Louisa Gouliamaki/Pool via AP)

Kyriakos Mitsotakis chose Thursday, designated International Day of People with Disabilities, to visit the ancient citadel. The World Heritage site is closed to the public due to pandemic restrictions, but it's expected to reopen when a national lockdown lifts on Dec.14.

A new lift for people using wheelchairs has been built on the north face of the hill, while a badly eroded network of existing concrete walkways has been replaced with smooth artificial stone paths leading among the ruined 5th Century B.C. temples on the summit.

Mitsotakis said the project, which was funded by the private Onassis Foundation, will “make the Acropolis accessible to everyone ... without the difficulties associated with the classic route up to the Hill of Acropolis.”

Some in Greece had criticized the new 500-meter (yard) network of 4-meter wide (13-foot) pathways, saying they made excessive use of concrete. The Culture Ministry countered that the previous network, which dates from the 1960s and had been worn down by the shoes of millions of visitors, made heavier use of concrete and was in such bad shape it endangered visitors.

“I was saddened to realize that over the past months there has been cheap opposition rhetoric, even about this project,” Mitsotakis said. “This is a project for the whole world and, under normal circumstances, it should unite us all.”

First inhabited about 6,000 years ago, the Acropolis hill was fortified from Mycenaean times and in the 5th century B.C. was heavily rebuilt with marble temples, including the Parthenon and the Erechtheion, and the monumental Propylaea gates.

Until the early 19th century it served as a fortress.