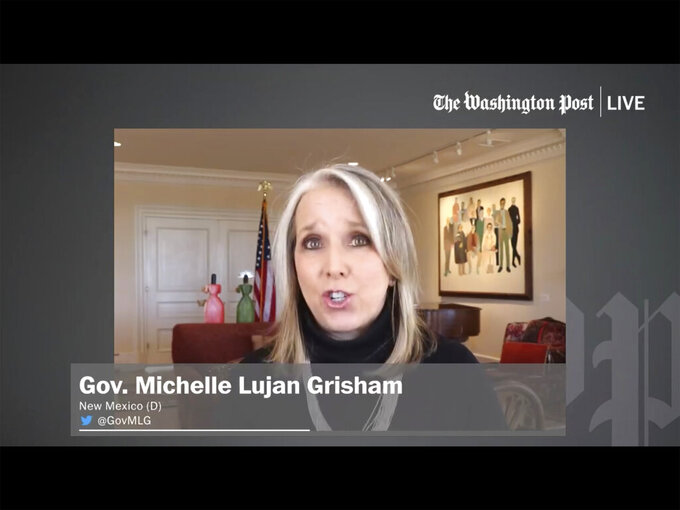 In this image taken from video, New Mexico Gov. Michelle Lujan Grisham appears on Washington Post Live on Tuesday, March 2, 2021, from Santa Fe, N.M., to discuss vaccinations and her administration's response to the coronavirus pandemic. (The Washington Post via AP)

ALBUQUERQUE, N.M. (AP) — New Mexico on Monday expanded eligibility for COVID-19 vaccinations to all school teachers, early childhood educators and other staff with the goal of getting the group its first shots by the end of March.

The state is making the move as part of a directive by the Biden administration to get more schools reopened amid the coronavirus pandemic. Democratic Gov. Michelle Lujan Grisham and state Health Secretary Dr. Tracie Collins said last week that the ability of New Mexico to meet the timeline will depend on the federal government increasing vaccine supplies.

Collins said the state had been in discussions with the White House about how the directive would affect vaccinations for other groups. Under the latest plan, the state will start with educators outside of the Albuquerque area this week. Those in the metro area can get shots next week, likely at a mass vaccination site, and the final week will target all of those statewide who have yet to be vaccinated.

More than 15,000 educators already have received shots, as some were eligible as part of New Mexico's phased-in approach to distributing vaccinations. The focus until now has been on the most vulnerable populations, including those 75 and over and younger people with chronic health conditions that put them at greater risk.

Absent the White House's directive, teachers and other educators were next in line to be prioritized under New Mexico’s phased-in approach to distributing vaccinations.

According to the state Public Education Department, there were more than 17,400 teachers on the rolls as of early December. That does not include other school staff, higher education employees or those who work in early childhood education programs.

Teacher unions have been pushing for more widespread vaccinations as pressure mounts to get back to in-person learning. Many New Mexico school districts have opted not to dramatically increase in-person learning despite approval from Lujan Grisham. Some have opened on a limited basis, allowing students to attend in-person based on the availability of teachers who volunteer.

In Santa Fe, the public school district and the union National Education Association-Santa Fe recently reached an agreement in which teachers and staff would be required to return to work in-person once they have been vaccinated or have had the opportunity to get a shot. A memorandum of understanding also notes that no employee will be required to get a vaccination.

Union President Grace Mayer said nearly all members have indicated their willingness to get vaccinated and she was excited about educators being added to the list.

Santa Fe Superintendent Veronica Garcia said in a statement that her schools have been ready to reopen since the beginning of the school year.

“Our hurdle to bringing students back has been access to vaccinations,” Garcia said. “I’m greatly encouraged with the federal prioritization of educational employees. ... We all want to get our students back on campus as soon as possible.”

Overall, more than 677,000 shots have been administered in New Mexico, ranking the state among the top in the U.S. when it comes to distribution. About 14.5% of the population is fully vaccinated and about one-quarter has received a first shot, according to state data.

For most people, the new coronavirus causes mild or moderate symptoms, such as fever and cough. For some — especially older adults and people with existing health problems — it can cause more severe illness, including pneumonia, and death.