New Mexico gets closer to hitting vaccination goal to reopen 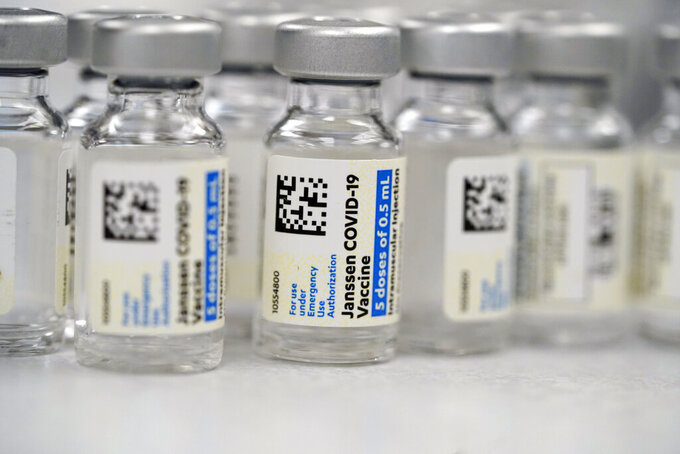 FILE - This March 6, 2021, file photo, shows vials of the Johnson & Johnson COVID-19 vaccine at a hospital pharmacy in Denver. Vaccine supplies have eclipsed demand in New Mexico even as the state makes a hard push toward meeting a key vaccination goal Thursday, June 17. The state is offering cash incentives for people who get either their second shot or the one-time Johnson & Johnson shot by Thursday. (AP Photo/David Zalubowski, File)

ALBUQUERQUE, N.M. (AP) — A key deadline looms for lifting the last public health restrictions in New Mexico, with Democratic Gov. Michelle Lujan Grisham wanting at least 60% of residents fully vaccinated against COVID-19 by Thursday so the state could move forward with plans in the coming weeks to fully reopen the economy.

Vaccinations have been inching up only by a couple tenths of a percent daily, and state officials said Wednesday that an additional 21,307 people would need to get either their second shots or the one-dose Johnson & Johnson vaccine to hit the mark.

State data showed the vaccination rate at 58.7% on Wednesday, up from 58.5% the day before.

New Mexico has been offering cash incentives this week and promoting a multimillion-dollar sweepstakes through social media and email in hopes of reaching the governor's goal.

“We have good data that the incentives are working,” Dr. David Scrase, head of New Mexico's Human Services Department, said during a virtual briefing. “I think they're kicking in. We're seeing an ascent every day in appointments and vaccines sought. ... We are really, really focused on this.”

Scrase shared statistics that showed a 30% increase in the number of second shots given per day after the state started its latest incentive of $100 for people who get their shots this week. The data also showed 965 people scheduled Johnson & Johnson shots, or eight times more than before the campaign started.

Scrase and the state's health secretary, Dr. Tracie Collins, warned that the pandemic is expected to continue among those who are unvaccinated. They cited data from across the U.S., saying the higher the vaccination rate among the population, the lower the number of COVID-19 cases per 100,000 people.

New Mexico is among the states to experience that trend, Scrase said.

State officials expressed confidence and said they weren't too concerned about not meeting the 60% vaccination goal. They said the vaccination numbers will be reviewed Friday and that ultimately the decision on when to move forward with ending the state's color-coded risk system and lifting the remaining public health restrictions will be up to the governor.

“I'm confident that we'll end up doing the right thing for the people of New Mexico," Scrase said.

Lujan Grisham has faced much criticism for her handling of the pandemic. Her public health orders also triggered a number of legal battles.

Health officials reported Wednesday that New Mexico is meeting all of the metrics used to determine whether reopening can happen. That includes the rate at which the virus is spreading, the seven-day average of new cases, testing and tracing capacity, and the capacity of the health care system.