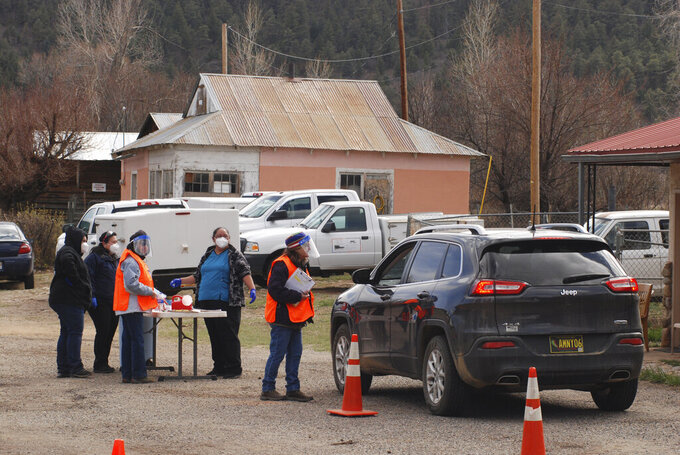 FILE - In this April 20, 2021, file photo, medical workers and volunteers administer the coronavirus vaccine at a drive-thru immunization clinic at an inn and RV park in Mora. New Mexico Gov. Michelle Lujan Grisham says all remaining pandemic-related public health restrictions on commercial and day-to-day activity in the state will be lifted July 1. She made the declaration Friday, June 18 as state health officials continued to crunch the vaccination numbers. (AP Photo/Morgan Lee, File)

ALBUQUERQUE, N.M. (AP) — New Mexico Gov. Michelle Lujan Grisham said Friday that all remaining pandemic-related public health restrictions on commercial and day-to-day activity in the state will be lifted July 1, clearing the way for restaurants and other venues to operate without any capacity limits and for cities to plan in-person Fourth of July celebrations and other summer festivals.

The Democratic governor made the declaration as state health officials continued to crunch the vaccination numbers following a push that included a multimillion-dollar sweepstakes, other cash incentives and offers that included free child care for those who needed it in order to get their shot.

Lujan Grisham wanted at least 60% of residents 16 and older to be vaccinated two weeks ahead of the reopening. Her office said vaccinations stood at 59.4% on Thursday but that health officials were waiting for more federal data to come in that would push the state closer to its goal.

Still, the governor said in a statement that she had hoped the vaccination numbers would be higher by now.

“The variants across the globe and in the U.S. present very serious risks to unvaccinated people, even young people," she said. “We all, each of us, have the power to stop the serious illnesses and deaths: Get your shot. It’s safe. It works. It’s that simple.”

She vowed that the state would continue its vaccination campaign, saying that inoculations were the way out of the pandemic.

The July 1 reopening will mean that all businesses across the state can once again operate at 100% of maximum capacity levels.

However, state officials said businesses will still be authorized to require masks, distancing or other health precautions against the spread of COVID-19.

“I firmly believe limitless possibility awaits us on the other side of this crisis,” Lujan Grisham said, “and I am confident that continuing to work together for the betterment of all New Mexico workers and families, we will be a national model for recovery, growth and new opportunity.”

Republican lawmakers have been critical of the governor's handling of the pandemic, as have parents who were concerned about their children losing a year of learning because of the challenges of virtual schooling and the inability to participate in extracurricular activities.

Only this week did the state ease mask restrictions for student athletes during competition. Those students who are unvaccinated are still required to wear masks.

Republican Sen. Cliff Pirtle of Roswell accused the governor of setting what he described as “arbitrary goal posts.” Pointing to other states that already have opened, Pirtle said the handling of the pandemic by state officials has been exhausting and infuriating for residents.

“There’s no science or reason behind the continued shutdown,” he said. “If 60% of our population with immunity was the goal, we should have been open weeks ago given the amount of positive recovered cases in our state.”

State health officials have reported more than 204,600 confirmed COVID-19 cases since the pandemic began last year. More than 4,300 deaths in the state have been linked to the virus.

The Health Department also announced Friday that the names of four people have been drawn as part of the state's vaccine sweepstakes. Each will win $250,000.

Their names have yet to be released as state officials were working to verify their vaccine status. They are from Albuquerque, Santa Fe, Las Cruces and Ruidoso.