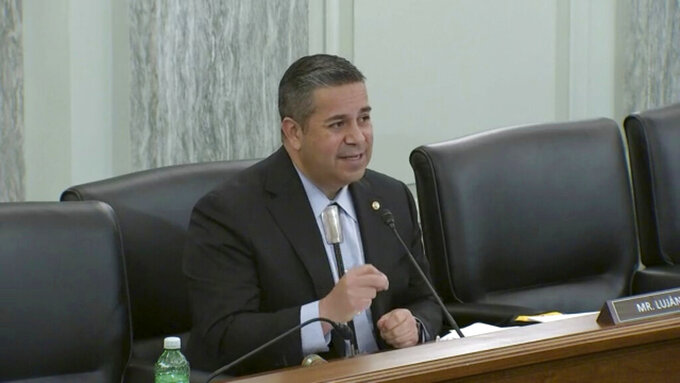 New Mexico Health Secretary Dr. Tracie Collins was among those who testified. She said the state's early adoption of a registration site, the streaming of weekly news conferences by top health officials, a dedicated call center for those without internet access and town halls tailored to specific communities are among the tools that have helped to get the message out.

That message also has been shared in multiple languages as a way to be as inclusive as possible, she said.

“It's huge that we don't send the message that you don't matter, that in fact you do very much matter and that's why we're not going to rely on one mode of communication,” Collins told members of a Senate subcommittee on communications and media.

U.S. Sen. Ben Ray Luján, the New Mexico Democrat who chairs the panel, said while more than 120 million Americans have received at least a first shot, he was concerned that misinformation being shared on social media, by some commentators and through word of mouth has been keeping people from signing up to get a shot.

He cited a recent survey in which more than 3 million Americans weren't sure they would get the vaccine due to cost concerns.

“Let me be clear: The vaccine is provided at no cost. It is free,” Luján said. “We must do better. A clear and consistent message will save lives.”

As part of the pandemic relief package approved in December, Congress included funding to educate the public about the vaccination effort. Since then, Luján said hesitancy rates have fallen but it hasn't been enough.

Gordon Smith, president and CEO of the National Association of Broadcasters, testified that local radio and television stations across the country have donated hundreds of millions of dollars worth of air time to share information with the public about the pandemic and vaccines. He said broadcasters have one of the most expansive platforms for reaching more than 90% of American households, including those in rural areas.

Yonaira Rivera, an assistant professor of communication at Rutgers University, acknowledged the challenges of reaching communities of color and said the dissemination of misinformation makes that effort even more difficult. She recommended leveraging the infrastructure that already exists among community groups and trusted local leaders to share culturally tailored information.

The vaccination push comes as some states see upticks in new COVID-19 cases and the emergence of more variants.

“It is still important to get the vaccine because it can stop the replication of COVID and therefore stop the mutation and reduce the chances for more mutations,” Collins said. “So it's really making sure we work with the communities to get that messaging out there and we do it often and consistently.”