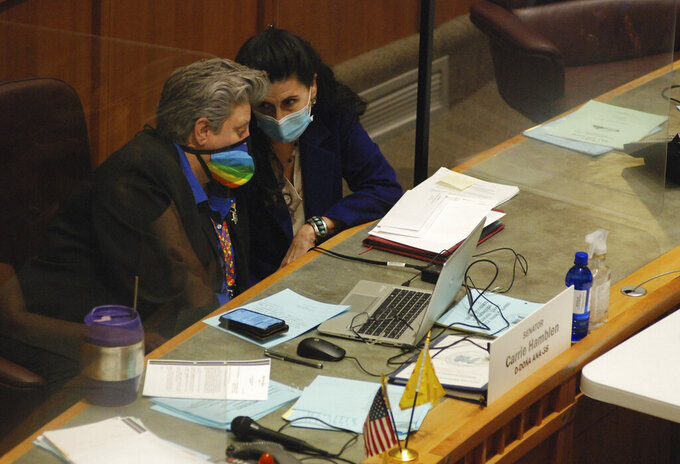 Democratic State, Sen. Carrie Hamblen of Las Cruces, N.M., left, and Sen. Linda Lopez of Albuquerque, hold a discussion on the floor of the New Mexico State Senate in Santa Fe, N.M., Friday, March 19, 2021. The New Mexico Legislature was rushing to send final bills to the governor before the end of the annual legislative session at noon on Saturday, March 20, 2021. (AP Photo/Morgan Lee)

The House and Senate on Friday passed a number of education proposals with less than 24 hours to go before adjourning. They ranged from increased withdrawals from the state’s multibillion-dollar education endowment to increased classroom hours that could lengthen the school day.

Both chambers passed a constitutional amendment that, if approved by voters, would increase disbursements from the state’s $20 billion Land Grant Permanent Fund from around 5% to 6.25%. The extra money would pay for early childhood programs like universal pre-K and increase spending in K-12 schools.

The governor is urging voters to support the amendment.

“We are talking about fundamentally changing the historical trajectory of our state. This is a big deal, the big deal,” Gov. Michelle Lujan Grisham said in a statement. “This is the single most important investment we can make. And I feel confident New Mexicans will make it.”

That investment is one of many being advanced by the Legislature over funding formulas ruled deficient in state or federal court. Lawmakers also voiced support for bills aimed at permanently increasing funding for school districts and capital outlay projects in areas serving Native American students, who are party to the lawsuits.

In the short term, the Democratic-controlled Legislature is increasing overall education spending.

Legislators rejected proposals to tie school budgets to pre-pandemic enrollment numbers, which won’t change overall funding but could hurt schools with upticks in enrollment this fall. They did authorize schools to use 2019 mileage for school bus budgets.

The overall funding increase could offset district losses, though some have lost more students than others. Budgets were scheduled to decrease after enrollment dropped more than 3% last year.

"We know some of them will come back, some of them have been homeschooled. Many of them in my area have left the state, so they’re going to school in Texas. And I’m not sure if they will come back,” said Republican Sen. Gay Kernan, who represents a district in southeastern New Mexico.

New Mexico schools are expecting a temporary boon from the latest federal pandemic relief, which will send close to $1 billion to districts starting as soon as next month. The government mandates 20% for narrowly-defined, pandemic-specific costs, like upgrading to ventilation systems that filter virus particles.

Funds can be spent through 2023 on everything from computers to contract counselors.

The Legislature also is expected to continue supporting more learning hours. Legislation aims to make it easier for schools to staff programs and increase classroom hours quickly to help children recover from a rocky year of learning during the pandemic.

Anti-discrimination bills will also affect schools. Students are covered under a measure that protects traditional hairstyles like dreadlocks or Indigenous braids, as well as religious coverings. The law limits discriminatory dress codes and provides additional recourse for verbal abuse.

New Mexico’s system for distributing broadband is undergoing belated reorganization after the state’s near-total shutdown of school buildings left around 20% of students without devices or internet for online schooling, according Public Schools Facilities Authority spring survey. Lack of internet extended into at least December in many areas.

Coordinated House and Senate bills create and fund an office and oversight body for broadband programs and put aside $70 million for cities and counties, and $25 million for schools.

That won’t undo decades of broadband infrastructure mismanagement overnight and won’t significantly increase connectivity for students by fall. But it could increase the rate at which high-speed internet is offered to rural residents and boost satellite and other non-fiber solutions expected to become more available in coming years.

“We will have a single entity in charge,” said Albuquerque Democrat Rep. Natalie Figueroa, part of a coalition of legislators that started drafting broadband reform shortly after the pandemic hit. “We'll have the projects ready to draw down (federal funds) when they are available.”

“This is an incredible game-changer," Republican Rep. Jason Harper of Rio Rancho said during a House floor session Tuesday, discouraging over-investment in fiber optic cable internet. “I really think half of us will have our internet through Starlink and SpaceX in the next couple of years."