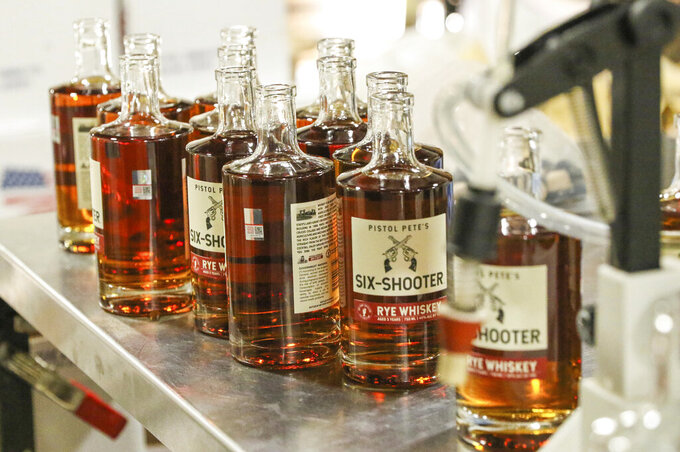 ALBUQUERQUE, N.M. (AP) — New Mexico State University on Wednesday unveiled its own officially licensed whiskey, making it the first college to do so as schools across the U.S. try to create new revenue streams amid shrinking higher education budgets.

Pistol Pete’s Six-Shooter whiskey expands on the university's brand building effort, which started several years ago with a golden ale crafted by one of the state’s largest brewing operations. Last month, the school added a signature wine developed by vintners with deep New Mexico roots.

Like the other ventures, this one involves a partnership with another homegrown business — Dry Point Distillers.

New Mexico State Athletic Director Mario Moccia said licensed whiskey marks something new for the collegiate world, which over the last several years has seen its share of officially licensed craft beers grow to more than two dozen while schools such as Michigan State, Wake Forest and Gonzaga added wines.

Moccia described the licensing partnerships as positive steps for the university, for small businesses that have been struggling during pandemic-forced closures and for the athletic program, which shares in the proceeds each time bottle or can is sold.

“For us to be the first, I think it’s a source of pride, it’s a source of innovation and I have no doubt other schools will say this is a good thing because in today’s day and age when the budgets are being reduced, it's incumbent upon us to do things to generate our own revenue,” he told The Associated Press in an interview.

The pandemic has cut into ticket sales and other revenue that usually supports college athletic programs. Licensing fees — for everything from items that can be consumed like beer, wine and whiskey to sweatshirts and pennants — brings in around $130,000 to $150,000 for New Mexico State, Moccia said.

The university has worked on the whiskey project with Dry Point Distillers for about six months with the help of marketing professors and students sworn to secrecy. For Chris Schaefer, an owner of the distillery and an Aggie alumni, it was more than a chance to fuel his passion for whiskey.

“It’s throwing us a lifeline because with the pandemic bar sales are down,” he said. “To be able to add a product to our package wholesale liquor line, something with the backing of New Mexico State University and the notoriety of that and to tie in the trifecta of the beer and the wine and now to have the whiskey, I think is going to be very beneficial.”

Schaefer said his seven employees essentially have been working only part time because of the state's coronavirus restrictions.

“We’re at 25% capacity in the bar so that means 25% of the tips, so it’s a difficult time to be in the bar and restaurant business,” Schaefer said. “But we’re navigating, we’re trying to figure it out and we're doing what we can to maintain.”

Distribution of the new whiskey will start in Las Cruces. There are plans to expand to Albuquerque, Santa Fe and possibly beyond in coming weeks.