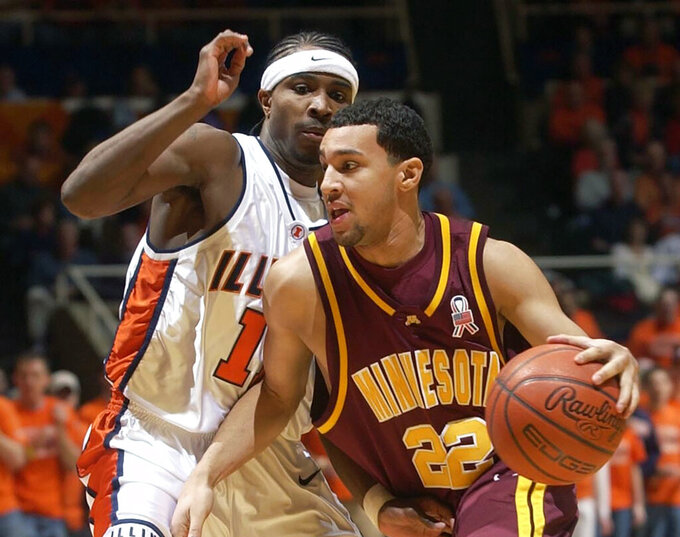 FILE - In this March 9, 2003, file photo, Minnesota's Ben Johnson (22) drives past Illinois Dee Brown (11) in the first half at Assembly Hall in Champaign, Ill. Minnesota has picked former player and assistant Johnson to be the new head men's basketball coach, according to a person with knowledge of the hire. The person spoke to The Associated Press on condition of anonymity because university had yet to make the announcement. (AP Photo/John Dixon, File)

MINNEAPOLIS (AP) — Minnesota hired Ben Johnson as its new men's basketball coach Monday, giving the former Gophers player and assistant a five-year contract — and favoring relationships over experience in the latest attempt to lift a long-middling program up to the top of the Big Ten.

Johnson will replace Richard Pitino, who was fired after eight seasons and then took the job at New Mexico. The 40-year-old Johnson, whose base salary will begin at $1.95 million, was on staff under Pitino with the Gophers for five seasons before spending the last three years at Xavier under Travis Steele. Pitino made $2 million annually, plus performance incentives.

For Minnesota athletic director Mark Coyle, with university finances under pressure due to a steep reduction of revenues during the COVID-19 pandemic, this was bound to be a crucial hire. Williams Arena attendance has waned in recent seasons, as the Gophers frequently finished in the bottom half of the conference and the professional teams in town all got new or upgraded venues.

“Ben is a proven coach who is ready to lead his own program,” Coyle said in a statement distributed by the university. “He has earned this opportunity and is a tremendous teacher, recruiter and relationship builder. I am thrilled for him to lead his alma mater, and I am excited for the future of our men’s basketball program.”

Johnson will be formally introduced at a news conference on campus Tuesday. His deal is pending completion of a background check and approval by the Board of Regents.

“The University of Minnesota is such a special place and has impacted me in immeasurable ways on and off the court,” Johnson said.

Well-connected with Minnesota’s thriving prep circuit, Johnson ought to give the Gophers a boost with local recruiting that lagged under Pitino. In fact, most of the in-state players who stayed home in recent years were steered there by Johnson, namely current NBA players Amir Coffey and Daniel Oturu and guard Gabe Kalscheur, who just completed his junior season. Coffey, who's with the Los Angeles Clippers, posted on Twitter that Johnson would be a “great hire.”

Top-tier programs like Michigan (Juwan Howard) and Ohio State (Chris Holtmann) have not missed a beat with more recent hires, with the Wolverines in Howard's second year winning the regular-season title this month.

Minnesota finished in 10th place or lower in the Big Ten five times in Pitino’s eight years. He took the Gophers to the NCAA Tournament twice.

“To have someone like Ben Johnson leading this program — an ambassador for our university who grew up here, went to school here and knows what the university is all about — is tremendous," school President Joan Gabel said.

Johnson, a native of Minneapolis and product of the powerhouse program at DeLaSalle High School who won two state championships there, was a two-time captain with the Gophers for coach Dan Monson after transferring from Northwestern. With Minnesota, Johnson scored 533 points in 59 games and graduated in 2005 with a bachelor's degree in sociology. He has also coached at Dayton, Texas-Pan American, Northern Iowa and Nebraska.

The Gophers have won only two NCAA Tournament games in six appearances over the 22 seasons since Clem Haskins was fired amid the fallout from an academic fraud scandal that tainted the 1997 team that reached the program's only Final Four. Minnesota has posted only three winning records in Big Ten play since that team: 2002 and 2005 under Monson, and 2017 under Pitino.