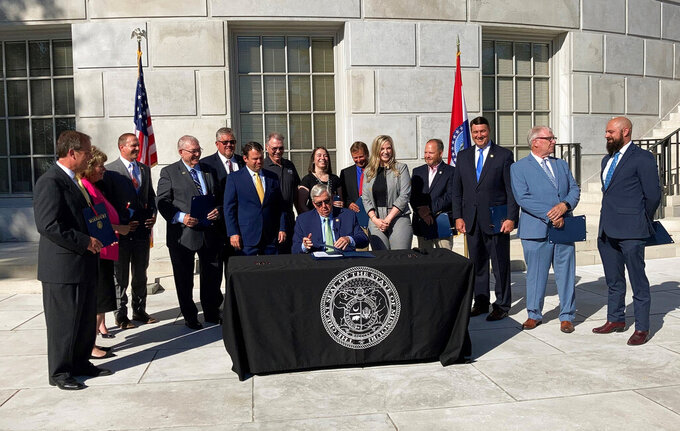 Missouri Gov. Mike Parson signs a copy of a bill limiting the duration of local public health orders during a ceremony Tuesday, June 15, 2021 outside the state Capitol in Jefferson City, Mo. Parson signed a couple dozen copies of the legislation and provided them to lawmakers and others who had supported the measure, including representatives of the restaurant industry. (AP Photo/David A. Lieb)

The law took effect immediately upon Parson's signature, but it may have little immediate effect because most local officials already lifted their coronavirus restrictions on businesses and public gatherings and have not been checking people's vaccination status.

Parson, a Republican, said the law still is important for the future.

“Then next time we do get in a crisis, we're going to have a little bit more safeguards for the general public to make sure they have more transparency and more of a voice in the process,” he said.

When under a statewide emergency declaration, the new law limits local orders restricting businesses, churches, schools or gatherings to 30 days, unless extended by a majority vote of the local governing body such as the city council. If there is no state emergency declaration, then local orders closing entire classifications of entities or activities could last for only 21 days, unless extended by a two-thirds vote of the local governing body.

The Republican-led House and Senate passed the bill overwhelmingly during the legislative session that ended in May. The measure was driven by lawmakers upset that some local officials — primarily in the state's more populated areas — kept coronavirus capacity limits in place long after Parson lifted statewide restrictions in May 2020.

“When this pandemic occurred, there was overreach on the local levels,” Parson said.

Parson never imposed a mask mandate, though he encouraged people to wear them. Some local officials kept mask mandates in place until the U.S. Centers for Disease Control and Prevention said last month that fully vaccinated people no longer needed to wear masks in most settings.

Research has found that mask mandates and limits on group activities such as indoor dining can help slow the spread of the coronavirus. But states with greater government-imposed restrictions did not always fare better than states with fewer restrictions during the long course of the pandemic.

As vaccination rates have increased and coronavirus caseloads have decreased, most state and local officials have lifted restrictions. As of Tuesday, more than a dozen states had announced an end to their COVID-19 emergency declarations, including neighboring Arkansas and Oklahoma. Kansas' top Republican lawmakers, whose approval is needed for emergency extensions, also let Democratic Gov. Laura Kelly's emergency declaration expire Tuesday.

Parson's emergency declaration is scheduled to run through Aug. 31. He said the order has allowed his administration to waive about 600 regulations during the pandemic. Parson said he has considered ending the emergency declaration but has continued it to help facilitate an economic recovery and to be able to mobilize the National Guard if necessary.

Some states are offering large cash prizes and free college tuition as incentives for people to get vaccinated. Parson said he is reluctant to offer similar perks — even though Missouri's vaccination rate is lower than the national average.

“I get the whole theory behind it, but I think as government you've got to be careful when you start doing things like that — that pattern you set,” he said,.

Missouri has been without a permanent director of its health department since Randall Williams resigned in April. Parson said he has winnowed the search for a replacement to four or five candidates and is weighing whether it's most important to have someone with a medical background or administrative expertise.