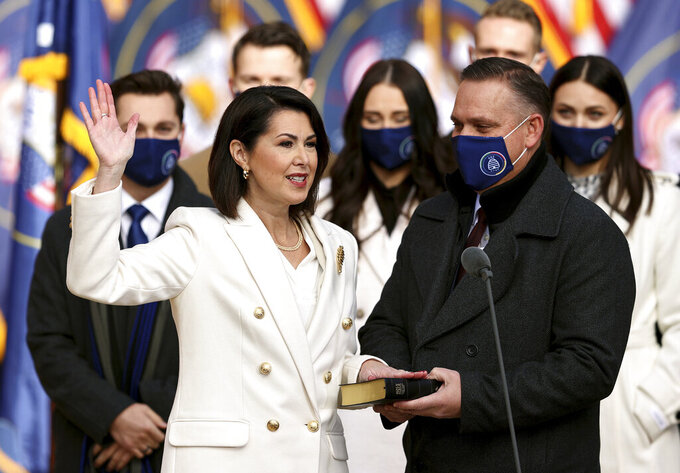 Lt. Gov. Deidre Henderson takes her oath of office as her husband Gabe at her side during inaugural events at Tuacahn Center for the Arts in Ivins, Utah on Monday, Jan. 4, 2021. (Scott G Winterton/The Deseret News via AP)

SALT LAKE CITY (AP) — Republican Spencer Cox called for unity amid “hateful rhetoric” in national political discourse after being sworn in Monday as Utah's first new governor in more than a decade.

Cox denounced misinformation and division that he said have further taken hold throughout the pandemic. As he stood in front of red rock in southwestern Utah, Cox referred to a group of anti-mask protestors who lined a road to the ceremony calling for an end to the state’s coronavirus restrictions.

“We are more divided than at any time in our lifetimes as the news is filled with civil unrest and protests, including one right outside this venue here today,” Cox said. “We are facing a crisis of empathy, a scourge of contempt. Very little feels ‘united’ about the United States today.”

The new governor said “it's not too late” and called on the state's residents to join together.

“We must seek to understand one another, to treat each other not as enemies but as friends and to secure justice for all without demonizing and ostracizing those with whom we disagree,” he said. “Indeed, this is the only way it’s ever been done, and it is distinctly American.”

State Sen. Deidre Henderson was sworn in as Utah's second female lieutenant governor. She also promoted a message of unity and said the Cox administration would fight for all Utah residents.

“The difficulties of the past year have exposed some of the inequalities that still exist in our communities," she said. “I want to assure all Utahns that there’s room at the table for you.”

Cox is succeeding Republican Gov. Gary Herbert, who chose not to run for reelection after more than a decade in office. Cox, who became Herbert’s lieutenant governor in 2013, won the gubernatorial election in November.

Herbert’s administration has faced criticism for resisting implementing stay-at-home restrictions or statewide mask mandates early in the pandemic. The former governor instead stressed “personal responsibility,” pleading for months for people to follow public health guidelines until he issued a statewide mask order in November.

State Rep. Brian King, the House minority leader, said he is hopeful that Cox will take a more “proactive approach” toward containing the virus spread by pushing for increased testing, contact tracing and speeding up the state’s vaccination process.

King also said he was encouraged to hear Cox openly disavow the spread of misinformation during his address.

“We need to recognize that and call it out,” King said after the ceremony. “We’re only as good as the information we get, and if we get bad information, we’re going to have faulty opinions and a faulty approach to solving the state’s problems.”

The inauguration, which has typically been at the Utah Capitol in Salt Lake City, was held in an open-air amphitheater at the Tuacahn Center for the Arts in Ivens.

The ceremony, which was held on the 125th anniversary of Utah’s statehood, was open to several hundred in-person guests and media who wore masks and were required to socially distance. Attendees had to test negative for COVID-19 prior to the event.