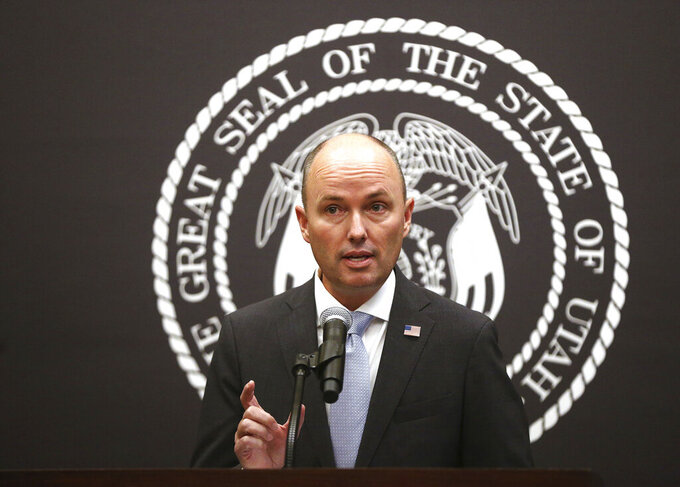 Utah Gov. Spencer J. Cox speaks during a COVID-19 briefing at the Utah State Capitol in Salt Lake City on Friday, Jan. 8, 2021. Cox unveiled a plan Friday to ramp up Utah's COVID-19 vaccine distribution as the state sees a post-holiday surge in new cases. Cox, a Republican, said he will issue an executive order requiring facilities to allocate their doses the week they are received and have local health departments manage distribution, with an expectation of administering 50,000 doses a week. (Jeffrey D. Allred/Deseret News, via AP, Pool)

The Republican governor said he will issue an executive order requiring facilities to allocate their doses the week they are received and have local health departments manage distribution, with an expectation of administering 50,000 doses a week.

The state's 50,000 teachers and in-person school staff will be eligible to receive the vaccine as of Monday, Cox said. School districts will be expected to prioritize people over 65 or who have underlying health conditions.

“In Utah, every district except one has implemented in-person learning options with precautions to help protect educators, staff and students," Adams, a Republican, wrote in a statement. “Salt Lake City School District, it is time to step up.”

Utah's second phase of the vaccine rollout, which includes anyone 70 or older, will begin on Jan. 18. Former Gov. Gary Herbert, Cox's predecessor, initially said people over 75 would be eligible.

The governor’s plan came as the state’s new COVID-19 cases continue to rise and ICU beds are nearly full. In the past week, Utah’s positivity average has increased from 26.8% to 32.7%, according to state data.

Cox said there are no immediate plans to increase COVID-19 restrictions, but he urged anybody who is experiencing symptoms or have had close contact with a confirmed case to get tested.

"When we have a positivity rate of upwards of 30% that’s extremely problematic," Cox said. “We want to be below 10%, and so we need testing in order of magnitude greater than what we’re seeing right now to ensure we’re catching all the cases that are out there.”

Intensive care units at Utah hospitals best equipped to treat COVID-19 patients reached 92.2% of capacity on Friday. There have been more than 301,000 reported virus cases in Utah and 1,381 known deaths related to the virus, according to state data.