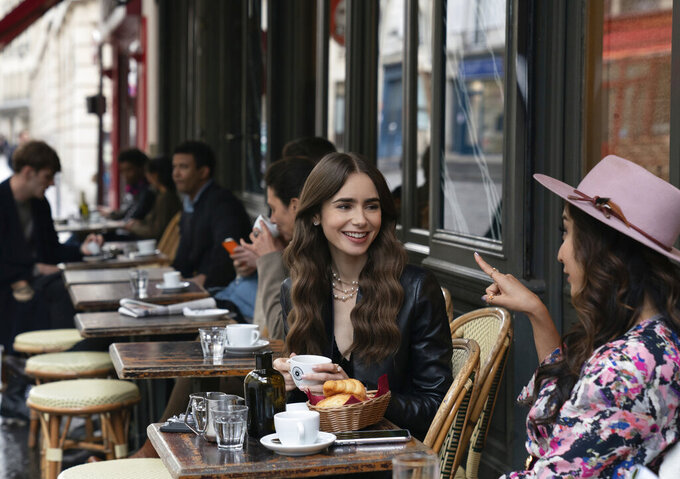 This image released by Netflix shows Lily Collins, center, in a scene from "Emily in Paris," premiering on Friday, Oct. 2. (Stephanie Branchu/Netflix via AP) 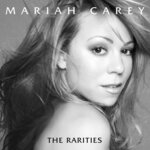 — "The Glorias ": Julie Taymor's film, based on Gloria Steinem's 2015 book “My Life on the Road,” is a biopic with verve and flair. The legendary feminist leader is played by four different actresses (Julianna Moore, Alicia Vikander, Lulu Wilson, Ryan Kira Armstrong) across four stages of her life. Sometimes they meet each other. But the multitudes of Steinems aren't just a deconstructionist trick. The feminism embodied by Steinem is an expression of women everywhere, Taymor suggests. Traversing America in time and place, “The Glorias” finds her everywhere. Debuting Wednesday on Amazon Prime.

— “Dick Johnson Is Dead”: Kristen Johnson was a veteran documentary cinematographer when she made one of 2016's very best films, “Cameraperson,” a collage of footage captured over her 25-year career that dug into the relationship between subject and filmmaker. Johnson's latest, premiering Friday on Netflix, is a playful eulogy to her father as she slowly loses him to dementia. That may sound dark, and it is. But “Dick Johnson Is Dead,” made with love and gallows humor, is as much about life as it is death.

— "The Boys in the Band": Mart Crowley's 1968 play has an important place in the history of American theater. One of the first productions to put the lives of gay men front and center, it sparked a sensation by dramatizing the joy and pain of its out-of-the-closet characters over one night in New York, during a party with an uninvited guest. This film, debuting Wednesday on Netflix, is adapted from the starry 2018 Broadway revival, with Jim Parsons, Zachary Quinto, Matt Bomer and Andrew Rannells. (There was also a 1970 movie adaptation by William Friedkin.) As an artifact from a pre-Stonewall past, it takes on an elegiac aura of tribute, with its very successful cast members honoring an earlier, less liberated generation.

— Mariah Carey has pulled from her rich vault to compile a new album called “The Rarities.” Made up of songs recorded from 1990 — the year she dropped her multi-hit self-titled debut album — and 2020, the album features previously unreleased songs and rare B-sides, some even from recording sessions for her top-selling albums like “Emotions,” “Music Box” and “Day Dream.” The release of “The Rarities” is tied to “The Meaning of Mariah Carey,” the pop icon’s memoir coming out Tuesday.

— K-pop girl group BLACKPINK have cracked the Top 40 with “How You Like That” and the Selena Gomez-assisted “Ice Cream,” two tracks from their new album coming out Friday. “The Album,” which also includes a collaboration with Cardi B, features eight songs that fuses trap, pop and dance sounds. The group, made up of JISOO, JENNIE, LISA, and ROSÉ, came on the music scene in 2016 and have collaborated with Dua Lipa and appears on Lady Gaga’s latest album, “Chromatica.”

— Queen and Adam Lambert have performed more than 200 shows together, and now they are releasing their first live album. They idea came after the rockers had to cancel their tour because of the coronavirus pandemic and wanted to find a way to please their die-hard fans. “Queen + Adam Live Around the World” will be released Friday and the 20-track set includes concert highlights from around the world personally selected by Roger Taylor, Brian May and Lambert.

— If laughter is good medicine, then it’s “South Park” to the rescue. The animated series from Trey Parker and Matt Stone takes on the coronavirus with an hourlong episode, “The Pandemic Special,” debuting 8 p.m. EDT Wednesday on Comedy Central (repeated at 9 and 10 p.m. EDT). The kids return to school to find the anxiety-inducing new normal evidenced in their teachers and socially distanced classroom. Meanwhile, Randy deals with his alleged role in the viral outbreak that has the town of South Park on defense. We’re on edge: the new season start date has yet to be announced.

— How about a trip to Paris with Lily Collins for company and Darren Star (“Sex and the City”) as tour guide? “Emily in Paris,” a 10-episode romantic comedy debuting Friday on Netflix, stars Collins as a marketing executive who’s transferred to the City of Lights to revamp a newly acquired company’s social media strategy. Emily, of course, is not all work, with “intoxicating adventures” and romances — plural! — promised, along with envy-inducing fashion. Ashley Park, Philippine Leroy Beaulieu and Lucas Bravo co-star.

— Influential women have made it to the White House, if not yet the Oval Office. The CNN series “First Ladies” examines the tenure of six presidential spouses: Michelle Obama, Jackie Kennedy, Nancy Reagan, Eleanor Roosevelt, Lady Bird Johnson and Hillary Clinton. Interviews, archival footage and re-creations of events combine for what CNN calls a “bold revision” of how the women have been portrayed and what they contributed. The six-part series begins 10 p.m. EDT Sunday with an extended episode on Michelle Obama, with subsequent episodes airing on consecutive Sundays.