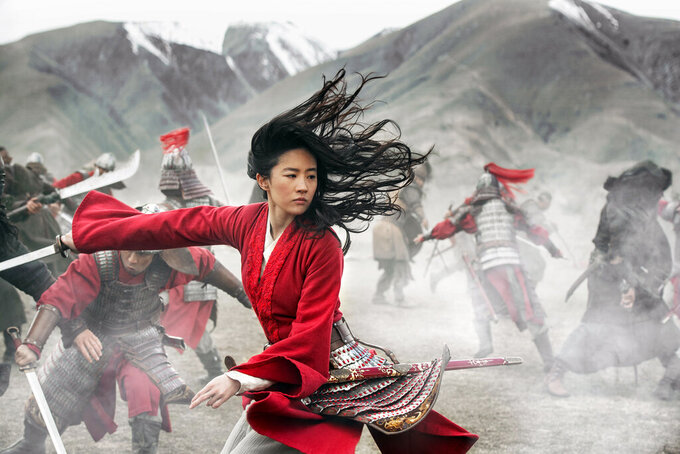 This image released by Disney shows Yifei Liu in the title role of "Mulan." (Jasin Boland/Disney via AP)

— “Women Make Film”: Fourteen weeks of movies centered on a 14-hour documentary and featuring showings of some 100 films from 44 counties, “Women Make Film” is an appropriately mammoth TV event. On Tuesday at 8 p.m. EDT, TCM will debut Mark Cousins’ personal and impassioned journey through the cinema of female filmmakers, with narrators including Tilda Swinton, Jane Fonda, Thandie Newton and Debra Winger. Along with it, the network every Tuesday through early December will air films by the likes of Sofia Coppola, Mira Nair, Julie Dash, Elaine May, Lynne Ramsay and many, many others. The documentary — “a film school of sorts in which all the teachers are women: an academy of Venus,” Swinton intones — and the film lineup celebrate a rich, underappreciated film history.

— “Mulan”: Of the films that have shifted to home release because of the pandemic, the Walt Disney Co.’s “Mulan” is a higher magnitude. The $200 million live-action remake of the 1998 animated movie was originally slated to hit theaters in March, but will instead debut in an innovative streaming release Friday. Streaming “Mulan” will cost you $30 and is available only to Disney+ subscribers.

— “I’m Thinking of Ending Things ”: As the writer of “Being John Malkovich,” “Adaptation” and “The Eternal Sunshine of the Spotless Mind,” Charlie Kaufman’s imagination has long been boundless and beautiful. In his latest, which Kaufman also directors, a young woman ( the exceptional Jessie Buckley ) takes a road trip with her new boyfriend (Jesse Plemons). It premieres Friday on Netflix.

In celebration of turning 70 this year, Billy Ocean is releasing his first album of new material in a decade. “One World,” out on Friday, features 12 songs that Ocean co-wrote, which were recorded last year in New York and Manchester. The album was originally supposed to be released in April but was pushed back due to the coronavirus pandemic. The Trinidadian-British says “One World” captures of his musical influences on one album.

U2, Elton John Kesha, Nick Cave, Father John Misty, Joan Jett, Lucinda Williams, BØRNS and more artists appear on the album “Angelheaded Hipster: The Songs of Marc Bolan and T. Rex,” to be released Friday. Hal Willner, who produced the 26-song album, passed away on April 7 from COVID-19. T. Rex is part of the Rock and Roll Hall of Fame’s 2020 class.

— Yes, women are seriously underrepresented in all areas of moviemaking. But TCM is celebrating a century-plus of what they have achieved with “Women Make Film,” a documentary anchoring a three-month festival of female-directed movies. Mark Cousins’ 14-part examination of the craft and content of films made by women debuts 8 p.m. EDT Tuesday, with new chapters showing weekly through Dec. 1. This Tuesday’s accompanying films include pioneering director Dorothy Arzner’s “Merrily We Go To Hell” (1932) and Lina Wertmuller’s “Seven Beauties” (1975). TCM’s Alicia Malone and Jaqueline Stewart host the festival.

— NBC’s “Transplant,” debuting 10 p.m. EDT Tuesday, is a hospital drama with a difference. It stars Canadian actor Hamza Haq as a Syrian physician and refugee from his country’s civil war who’s seeking to re-establish his medical career in a Toronto hospital. The series, which co-stars John Hannah (“Four Weddings and a Funeral”) as head of the hospital’s emergency department, focuses on issues including the plight of refugees as well as the expected heart-pounding medical crises. Worth noting: “Transplant” was a hit when it aired earlier this year on Canadian TV.

— Amazon Prime’s “The Boys” returns Friday for season two with anti-superhero pack leader Billy Butcher (Karl Urban) MIA and the rest of The Boys on the run, including Jack Quaid’s Hughie, Laz Alonso’s Mother’s Milk and Karen Fukuhara’s Kimiko. Their targets, the corporate-owned superheroes known as The Seven, have their own woes, with Homelander’s (Anthony Starr) power grab jeopardized by the arrival of Stormfront (Ava Cash). Sorry, no binging — episodes will be released weekly through Oct. 9 — but “The Boys” has already been renewed for season three.