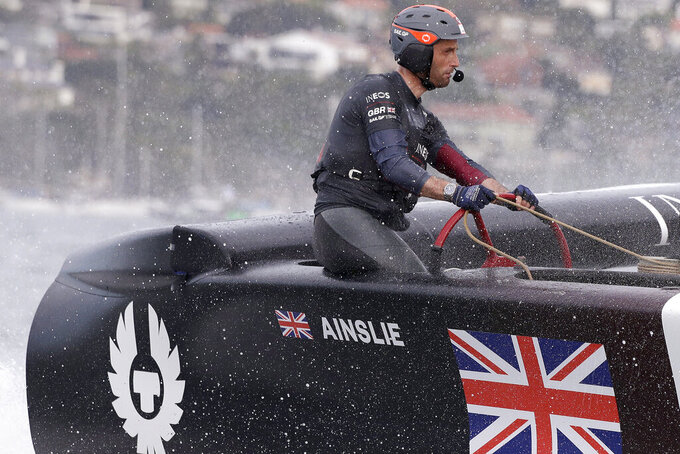 FILE - In this Feb. 29, 2020 file photo, skipper Ben Ainslie steers the boat as the British team crosses the finish line in the second fleet race of the SailGP series in Sydney. America's Cup teams are returning to the water in varying degrees nearly two months after the coronavirus pandemic forced the shutdown of what would have been an impressive global road show. (AP Photo/Rick Rycroft, File)

WELLINGTON, New Zealand (AP) — The New Zealand government has relaxed border restrictions to allow personnel from American and British America’s Cup syndicates to prepare in Auckland for the famous sailing event, which is scheduled to be staged next March.

The foreign teams will be allowed to build bases in Auckland and carry out boat testing ahead of the 36th America’s Cup regatta, which is set for March 6-21 next year. Team New Zealand is preparing to defend the America’s Cup, the world’s oldest sports trophy, against challengers from the United States, Britain and Italy.

Phil Twyford, the minister for economic development, on Friday said the challenging syndicates likely would be in New Zealand for around 10 months, setting up bases, testing and then dismantling facilities once the Cup match has taken place.

“The Government and Auckland Council have made significant commitments and investments in building infrastructure for the event,” Twyford said. “The America’s Cup would not be able to go ahead unless these international syndicate teams are allowed entry into New Zealand.”

America’s Cup races will take place for the first time in extremely high-tech foiling mono-hulls, 75-foot yachts which will rise out of the water on foils and will be capable of high speeds.

The dispensation for America’s Cup teams was among a number of relaxed immigration regulations announced by the government Friday. New Zealand is currently free of COVID-19 cases and has not had a new infection in 22 days.