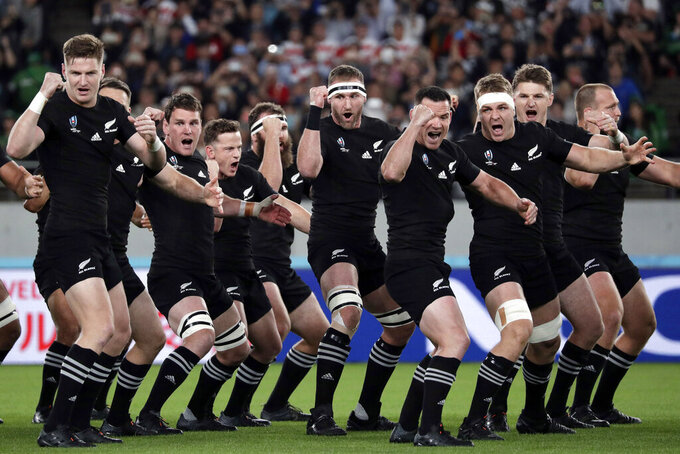 FILE - In this Nov. 1, 2019, file photo, New Zealand players perform the haka before the Rugby World Cup bronze final game at Tokyo Stadium in Tokyo, Japan. New Zealand Rugby will face a momentous decision on the future of the All Blacks at its annual meeting Thursday, April 29, 2021, when it debates whether to sell a stake in the commercial value of the national team to American investors. (AP Photo/Aaron Favila, File)

WELLINGTON, New Zealand (AP) — New Zealand Rugby has confirmed the All Blacks will play Fiji twice and Tonga once in July internationals.

The All Blacks were due to play two tests against Italy and one against Fiji, but Italy withdrew because of concerns about traveling during the coronavirus pandemic.

The test against Tonga will be played at Auckland’s Mount Smart Stadium on July 3 and will be preceded by a match between New Zealand Maori and Samoa.

New Zealand hasn’t played a test against Fiji since 2011 and hasn’t previously played back-to-back tests against the Pacific Island nation.

New Zealand Rugby said a schedule for this season’s Rugby Championship and Bledisloe Cup tests will be announced soon.