NFL does major juggling of schedule due to coronavirus 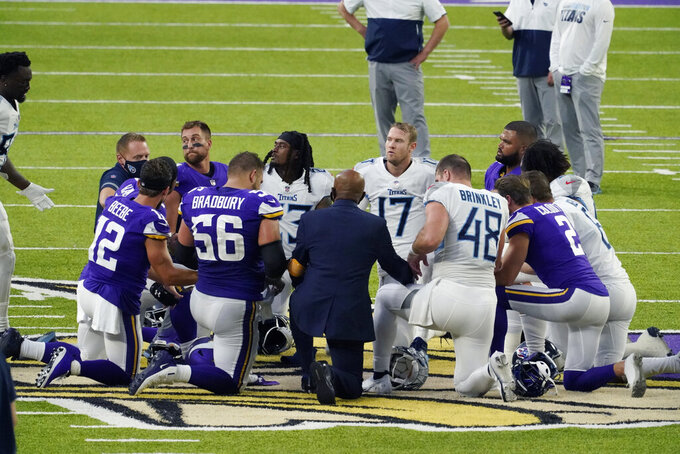 FILE - In this Sept. 27, 2020, file photo, Tennessee Titans and the Minnesota Vikings players meet at midfield following an NFL football game in Minneapolis. Tennessee will not be returning to the team's facility Wednesday, Oct. 7, 2020, after two more players tested positive in the NFL's first COVID-19 outbreak, a person familiar with the situation told The Associated Press. The Titans had no positive tests Monday or Tuesday for the first time after six consecutive days of positive results. A third straight day was necessary for the team to be allowed back in its headquarters.(AP Photo/Jim Mone, File)

The NFL has juggled its regular-season schedule due to coronavirus outbreaks with the Tennessee Titans and New England Patriots.

Nine teams are being affected, some over a period of weeks through Nov. 22: New England, Tennessee, Denver, Buffalo, Kansas City, Miami, the Los Angeles Chargers, New York Jets and Jacksonville.

Denver's game at New England, originally scheduled for Sunday and then moved to Monday night when the Patriots had more positive COVID-19 tests, now will be played next Sunday afternoon.

Kansas City's game at Buffalo, which was supposed to be played Thursday night, has been moved back to Monday, Oct. 19.

Tuesday night's game with the Bills at the Titans, which originally was to be played Sunday, remains on schedule despite another positive test result in Tennessee.

—Jets at Chargers moves from Week 6 to Week 11.

—Jaguars at Chargers moves from Week 8 to Week 7.

—Chargers at Broncos moves from Week 11 to Week 8.

—Chargers at Dolphins moves from Week 7 to Week 10.

—Dolphins at Broncos moves from Week 6 to Week 11.

“I mean, we know there are going to be issues — you do the best you can and if there's a problem you shut things off and you make sure you isolate,” Chiefs coach Andy Reid said. “We did a pretty good job with all that. And as far as Buffalo, we know that things are going to happen, so you have to do that.”

There were no other positive COVID-19 tests Sunday, and the Titans were given approved to practice by the league.

“Early this afternoon, the NFL gave the team permission to hold a practice with limited staff — players, coaches and a handful of support staff. The hour and 45 minute practice took place outdoors,” the team said.

The Titans also will have two players back from the reserve/COVID list: defensive lineman DL DaQuan Jones, a team captain, and long snapper Beau Brinkley. They were put on that list Sept. 29 when eight positive tests returned and the NFL shut down the Tennessee facility.

The NFL rescheduled New England’s game for a second straight week after reigning NFL Defensive Player of the Year Stephon Gilmore tested positive. This latest positive result puts their outbreak at four, according to the person who spoke to The Associated Press on condition of anonymity because neither team announced the latest results.

Broncos coach Vic Fangio, in a memorable take on the outbreaks in the league, noted on a Zoom call that what is occurring with the Titans and Patriots could happen to anyone.

“But I’m under no illusion that at some point we might have a positive test or two and be the cause of a game getting moved down the road. So, we’re all in this together, the entire league is.

“And in a weird way, I’m kind of happy to see some of this stuff happen because you see who the whiners are ... and who can’t handle adversity. And I’m going to try hard that the Denver Broncos don’t fall into any of those categories.”

The Titans last played Sept. 27 because of an outbreak that has now reached 24. They’ve already had a game with Pittsburgh first postponed, then rescheduled to Oct. 25.

The Bears also had an issue, moving offensive lineman Badara Traore from their practice squad to the reserve/COVID-19 list on Saturday.

Titans quarterback Ryan Tannehill addressed the uncertainty of the situation on Saturday.

“It was a roller coaster for sure,” he said. “Definitely the fact that we had guys with no symptoms testing positive and we had guys with full-blown symptoms getting consecutive negative tests on multiple days was really eye opening. Just the fact of we really don’t know.

“So, we have to treat everyone as if they have the virus. Unfortunately, really probably lost some faith in the testing system just through everything we’ve been through over the past week and a half. But we said that from the beginning that testing is not going to prevent the virus from being spread, it’s the way we handle ourselves with all the protocols and handle ourselves outside the building as well.”