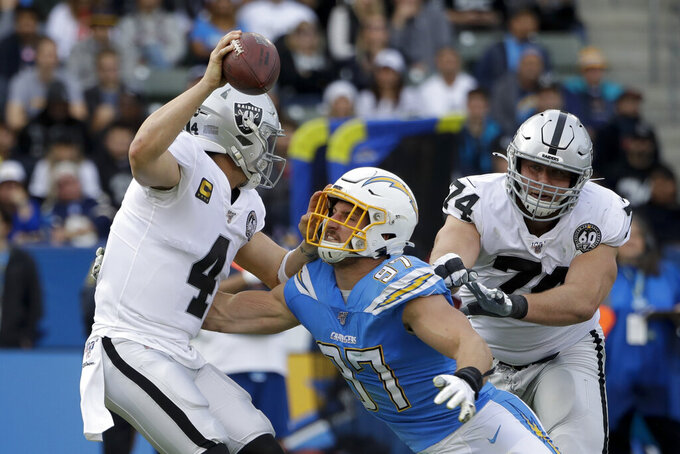 FILE - In this Dec. 22, 2019, file photo, Oakland Raiders quarterback Derek Carr is sacked by Los Angeles Chargers defensive end Joey Bosa during the first half of an NFL football game in Carson, Calif. Teams could afford recent contracts like the megabucks given to Patrick Mahomes and Bosa under normal circumstances. Because of economic effects from the coronavirus pandemic, future player deals and a salary cap that will be adjusted due to some monetary setbacks, upcoming free agents might find the marketplace tighter. (AP Photo/Marcio Jose Sanchez, File)

Let's get this straight from the outset: If the NFL has no fans at any games this season — or doesn't have much of a season at all — it will not go out of business.

Sure, the 32 teams and the league itself will lose millions, very possibly billions of dollars. Its broadcast partners will take a hit harder than any that Von Miller has delivered on the field. Same for sponsors and advertisers who pinpoint pro football as the best way to reach fans (read: consumers).

And unless the coronavirus pandemic stretches beyond the 2020 season, the NFL will come out right where it has been for decades: on top of the sports world.

“The NFL is to the sports and entertainment industry the way Amazon is to the retail industry," says Marc Ganis, co-founder of Chicago-based consulting group Sportscorp and a confidant of many NFL owners.

“We need to look at this as an overarching umbrella: This has a likelihood of being a one-season problem. So as we get to the 2021 season, the problem will have gone away, so it is a one-year aberration.

“There’s a semi-permanent impact (on other industries) I don’t see for the NFL. I see the NFL coming back stronger than ever for two reasons:

— "The value of the NFL for non-attendance activity. Broadcasting, gambling, Internet, video gaming, those all need the NFL more than ever before. The kinds of people and consumer activities it attracts, it will come back more strong.

— “The new CBA with the players, the 11 years of labor peace. When it was approved in March there were a host of high-profile players saying they were against it, in large measure because they didn’t see a rush to do it so quickly. They were as wrong as anybody could ever be. You just don’t know what tomorrow will bring, so get it done when you can get it done.”

Getting done the biggest chunk of NFL revenues, new broadcast deals, is on the horizon, too. From network TV to cable to satellite to radio to streaming rights, the NFL is likely to fill its vaults with untold riches even with the overall U.S. economy struggling.

First, of course, there is the COVID-19-impacted 2020 season, and the financials won't be pretty even if the entire regular season and playoffs go off as scheduled. Certainly not with empty stadiums across the nation — less than a dozen teams are likely to have fans on hand this season, barring a turnaround in the pandemic that no one in the medical community is predicting.

If games are canceled, or the playoffs and Super Bowl need to be moved back in the calendar, the monetary effect will be substantial — felt perhaps the most by NFL marketing partners.

"However, no one is signing the level of lucrative contracts they signed in previous years. They are still assessing and trying to understand how these dynamics will play out. We are not even sure where this is going to take us. Most of us expect the NFL to play a season, but it could take a different turn.

"Naturally, corporate sponsors need that visibility to drive a lot of initiatives ... but they’re not eager to make the aggressive moves given the current situation.

“The fan base is hungry, and if the teams can figure out the right way to package up corporate sponsorship value and deliver unique ideas to the advertisers and corporate sponsors, they will be OK. This will be a unique year, and everybody will take hits, but those who have progressive thinkers likely will win. And teams with ownership interest in their stadiums will have much more opportunity to capitalize than those that don’t.”

The Dolphins, who have announced plans to have about 13,000 fans at Hard Rock Stadium for their home opener in Week 2 against Buffalo, already have gotten creative.

Owner Stephen Ross and his staff came up with an idea that met with raised eyebrows: turning the stadium into a drive-in theater.

Similar to Ganis, Reino suggests there will be other potential programs in tangential areas of sports marketing, such as gambling and online betting — once taboo in NFL circles.

“Rest assured all 32 teams have some sort of task force on how they will monetize online betting as soon as it is approved nationwide,” Reino says.

How about providing season ticket holder’s extra value such as access to players socially distanced and on an experimental basis?

“These are the ideas that all of a sudden rise to the concept state because it is 2020 and where we are in 2020,” Reino adds.

So where is the NFL in 2020, at least financially? Like nearly every other business in America — and certainly like all sports — it's in a tough spot. Teams could afford recent contracts such as the megabucks given to Patrick Mahomes and Joey Bosa under normal circumstances.

Because of economic effects from the pandemic, future player deals and a salary cap that will be adjusted due to some monetary setbacks, upcoming free agents might find the marketplace tighter.

But to hold a bake sale — well, something a bit larger — to aid the NFL won't be necessary.

“There are activations being planned that are different from what we have seen in the past," Ganis says. "Auto companies are planning on major sponsorship activations; Americans always need to buy cars. There is a major plan for much more production by manufacturers and they have to get the cars out the door. Auto companies are major team sponsors.

“Airline sponsorships will be a problem, and the NFL has a deal, as do each of the teams. Anything travel-related is a problem.

“But there is so much interest in the NFL coming back in broadcasting and digital, and all the ancillary programming and fantasy leagues and sports gambling. Nobody wants to leave the NFL right now. ”