NFL's Kamara races into NASCAR as a team sponsor at Daytona 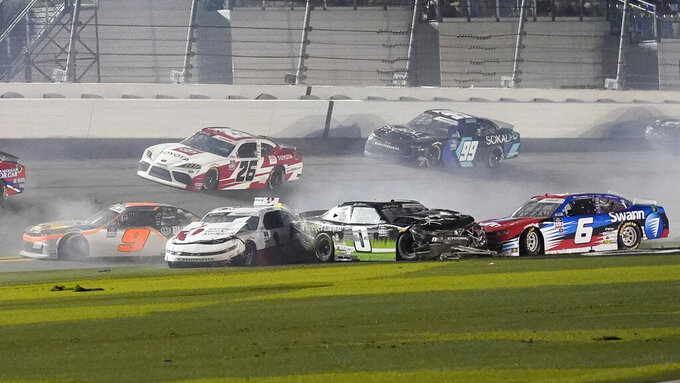 DAYTONA BEACH, Fla. (AP) — Alvin Kamara, NFL star and new NASCAR fan, has put some of his own money into the sport as a team sponsor this weekend at Daytona International Speedway.

The New Orleans Saints running back agreed to sponsor Ryan Vargas in the Xfinity Series race Saturday at Daytona. Vargas had no funding for the road course race but now will be sponsored by The Big Squeezy, the Louisiana juice bar chain owned by Kamara.

The deal was initially brokered over Twitter, where Kamara posted frequently last weekend from the Daytona 500. Kamara learned from NASCAR President Steve Phelps of the different avenues for participation a nd tweeted his surprise at the many options.

Vargas, meanwhile, had crowd-sourced for funding for Saturday's race and that tweet was flagged to Kamara. He replied to Vargas, who put the football player in touch with his team, and a deal was negotiated as Kamara drove home from the Daytona 500. It took roughly 36 hours for Big Squeezy to become a NASCAR sponsor.

“I had a price in my head but I never had any experience with NASCAR sponsorship. I've been a fan for a short time and I had this number, ‘Man, this is going to be a million dollars,’" Kamara said Friday. “Then when I heard the price... I felt like everything was aligning in the universe — I had just talked about it and then this opportunity came up, it was like ‘Man, shoot, why not?’"

Each team negotiates its own sponsorship rates but Kamara likely spent low five figures for the race. Sponsorship for one Xfinity Series race typically costs anywhere from $10,000 to $40,000, depending on the team.

Vargas is a 20-year-old driver from California trying to launch his NASCAR career. He's competed in 13 career Xfinity races, all with JD Motorsports. Vargas finished 18th in last week's Xfinity season opener and he's running for rookie of the year. His career-best race was eighth at Texas in October.

Kamara began paying attention to NASCAR during the pandemic when it was one of the first sports to resume competition. He was watching in Miami and noticed a June race was set for Homestead.

“I hear Homestead and that sounds like Florida, so I go on Google... I'm immediately like ‘I gotta go,’" he said.

NASCAR at Homestead permitted 1,000 service members and families from the area to that race, its first with spectators permitted during the pandemic. Kamara attended as a guest and watched from a suite wearing Bubba Wallace gear.

“It's surprising because this is not a sport that generally someone like me, or someone who looks like me, would be into. I'm just being realistic,” Kamara said. "But everybody is nice, so open, welcome and opening their arms to me to their world. I feel like I'm a part of it now.”

Kamara will be at Daytona on Saturday.