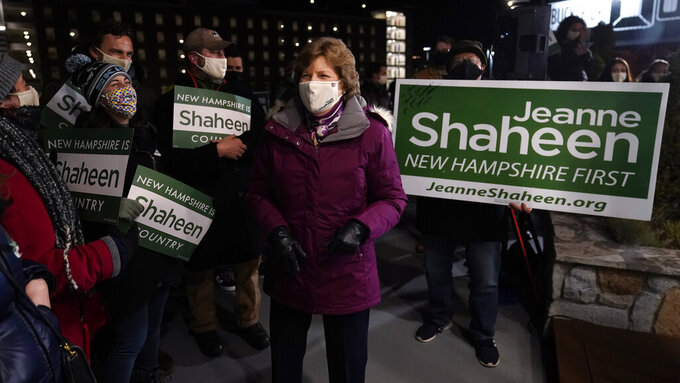 CONCORD, N.H. (AP) — Democrats dominated nearly all the top races Tuesday in New Hampshire, where voters reelected a U.S. senator and both House members and backed Joe Biden for president.

The only bright spot for Republicans was in the governor’s race, where Gov. Chris Sununu defeated Democrat Dan Feltes to win a third term.

Mukhtar Idhow, a 35-year-old Somali immigrant living in Manchester, said he voted for Biden because he believes the former vice president would bring the country together.

“There was a time even when Republicans were president that we used to go outside and have a normal conversation with our fellow Americans. Even if they don’t agree with Democrats, they recognized we are all Americans,” he said. “That not been the case over the last three years.”

As it did for the September primary, the coronavirus pandemic significantly changed both the process of campaigning and voting. Safety precautions were in place at the polls, and anyone with concerns about the virus was allowed to vote by absentee ballot.

“It was a campaign like no other, but it worked,” Shaheen told cheering supporters at an outdoor gathering in Manchester, where the temperature dipped below 30 degrees. Her husband, children and grandchildren stood behind her wearing mittens to ward off the cold and masks to protect against the virus.

Shaheen, a former governor and the first woman in U.S. history to serve as both governor and senator, defeated a newcomer to both politics and the state. Messner, an attorney from Colorado who turned his New Hampshire vacation home into his permanent residence about two years ago, criticized Shaheen as a career politician while casting himself as an independent outsider with experience creating jobs and navigating bureaucracies. Shaheen emphasized her record of helping small businesses during the pandemic, securing funding to fight the opioid crisis and her commitment to the Affordable Care Act.

“I have always fought for New Hampshire and I always will,” she said. “And right now, that means overcoming the COVID-19 pandemic. Our nation is in crisis. We need to work together, we need to rebuild and if we do, we will come through this even stronger than before.”

Another newcomer to the state was defeated in the 1st Congressional District, which has swung back and forth between the parties in the last decade. The winner, Pappas, a former state lawmaker whose family runs a popular restaurant in Manchester, spent much of the campaign playing up his bipartisan credentials and his work on behalf of veterans. Trump endorsed Mowers, who briefly worked in his administration’s State Department.

Speaking to a handful of supporters, Pappas said he would continue working for additional coronavirus relief in Congress, investment in the country’s infrastructure as well as measures to help people “get back to work.”

“It is an honor of a lifetime to represent my home state in Congress,” Pappas said. “I am so eager to get back to work. We must stop the political attacks on the Affordable Care Act and insure that health care is a right and not a privilege in this country. We must take on the big drug countries who reap record profits at the expense of Granite Staters and we’ve got to negotiate lower drug prices for the people of New Hampshire.”

The 2nd District featured a rematch between Kuster and Negron. During the campaign, Kuster emphasized her work in Congress to help pass the $2 trillion CARES Act that provided emergency relief during the pandemic and her advocacy for frontline workers. Negron, who runs a defense engineering and consulting firm in Nashua, is a conservative who supports Trump.

“I’m committed to fighting for policies that put hardworking families here in New Hampshire first,” Kuster told supporters, promising to work in her next term to protect Medicare and Social Security, lower the cost of prescription drugs and combat climate change with investments in clean energy.

She also praised the resilience of Granite Staters in dealing with the coronavirus pandemic and called for unity as the country looks to “rebuild and strengthen our economy.”

“We will build back better lifting up all Americans and their families to a brighter future,” she added.

The results marked the seventh time in 13 elections that New Hampshire voters have picked one party for governor and the other for their members of Congress. For the most recent three, including Tuesday, Sununu was elected governor and Democrats were sent to Washington. The opposite scenario played out in the other four split elections, with Democrats winning the governor’s race and Republicans sweeping the Congressional seats.

Secretary of State Bill Gardner on Monday said he expected more than 800,000 ballots to be cast, surpassing the record of 755,850 set in 2016. As of Tuesday morning, more than 235,000 absentee ballots had been returned to city and town clerks. The state’s Joint Information Center said there were long lines at some polling stations across New Hampshire but no signs of problems.

At several polling stations in Manchester, voters shrugged off the coronavirus to vote and said the precautions at the polls made them feel comfortable. Daniel Brisson, 77, wearing a mask outside a polling station after voting for Trump, said he had no concerns about voting in person and that he had trust in the election results.

“Whomever wins the vote, that is it. He is the president whether you like it or not,” he said. “He is our president and you have got to live with it.”