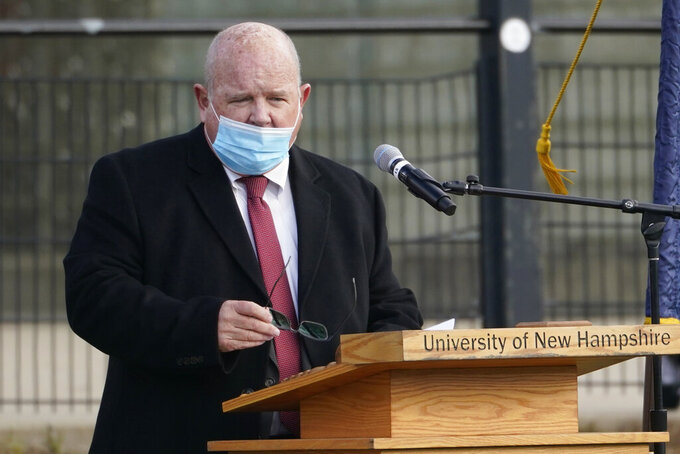 In this Dec. 2, 2020 photo, New Hampshire House Speaker Dick Hinch speaks during an outdoor legislative session at the University of New Hampshire in Durham, N.H. Hinch died, Wednesday, Dec. 9, 2020, just a week after he was sworn in as leader of the state's newly Republican-led Legislature. He was 71. (AP Photo/Elise Amendola)

CONCORD, N.H. (AP) — New Hampshire’s House Speaker Dick Hinch died Wednesday, just a week after he was sworn in as leader of the state’s newly Republican-led Legislature. He was 71.

Hinch, of Merrimack, was starting his seventh two-year term in the state House. He previously served as majority leader for the 2016-17 session and as minority leader when Democrats were in control the last two years. His death was announced by his office, which did not give any details of what it called “this unexpected tragedy.”

Gov. Chris Sununu ordered flags to be lowered to half-staff and said he was profoundly sad to learn of Hinch's death.

“Speaker Hinch was a fierce defender of the New Hampshire Advantage, a close friend, and a respected public servant," Sununu said in a statement. "His loss will be greatly felt by the people of this state, and I ask Granite Staters to join me in praying for his family during this incredibly difficult time.”

Republicans won majorities in both chambers in November. Senate President Chuck Morse, R-Salem, said he had been looking forward to serving with a colleague he considered a best friend.

“The news that he has passed away so unexpectedly is heart breaking. Dick was truly a kind and humble man. He always dedicated himself to what he liked to say, 'to the better of'" his family, friends, hometown of Merrimack and the state, Morse said in a statement. “Going forward without Dick will be very difficult but I have confidence that, in our sorrow, the members of the House and the Senate will all rally and live up to his memory.”

“I had the opportunity to work with him closely when I was Governor, including working together to enact a landmark settlement to improve mental health services and to increase funding for combating substance misuse," Hassan said in a statement. "Serving in our legislature — and especially in leadership positions as Speaker Hinch did — requires tremendous effort, all in essentially a volunteer capacity. Speaker Hinch was deeply committed to this service, and I am grateful for all he gave to our state and our country.”

A U.S. Navy veteran, Hinch also was active in his community, serving stints on the Merrimack Board of Selectman and town budget committee. He also was the owner and principal broker of a real estate agency.

In an emotional speech when he was elected speaker Dec. 2, Hinch urged lawmakers to view each other as “friends and colleagues,” rather than members of opposing parties, particularly during a pandemic.

“I've been working with members of our caucus in good times and in bad for a number of terms. Long nights, stressful days, but charging ahead for what we believed was the proper course,” he said. “Through that time, I've worked to ensure that everyone has a seat at the table.”

The swearing in of the the 400-member House and 24-member Senate was held outdoors at the University of New Hampshire because of the coronavirus pandemic. More than a quarter of House members, most of them Democrats, skipped the ceremony after learning the day before that several Republican lawmakers had tested positive for the virus after attending an indoor GOP caucus meeting Nov. 20 where many attendees weren't wearing masks.