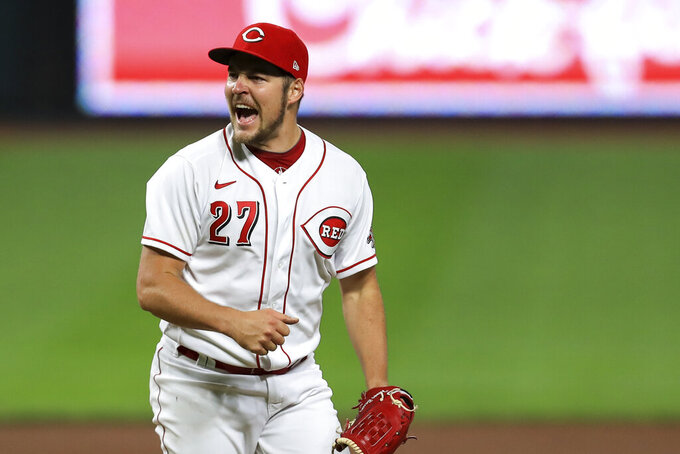 The reigning NL Cy Young Award winner announced his decision on Friday in a two-minute video posted to his Twitter account. Bauer narrated the piece, which ended with him saying, "This season is about making sure history remembers us as we wish to be remembered. This season is about adding to our legacy. And I can’t wait, Dodger fans.”

The Dodgers made it worth his while: His contract is for $102 million over three years, according to multiple media reports.

The video was titled “MY NEW HOME!!!” and the credits said it was written by Bauer, who wore a Dodgers jersey and cap. He tossed a baseball from one hand to the other.

Bauer, who turned 30 last month, was born in North Hollywood, went to high school in Santa Clarita and played baseball at UCLA.

The right-handed free agent also was negotiating with the New York Mets. Bauer's agent, Rachel Luba, tweeted, “So excited for your next chapter with the @Dodgers, Trevor Bauer.”

For the second straight year, the Dodgers had a mostly quiet offseason before making a blockbuster deal in February. In 2020, they traded for outfielder Mookie Betts and pitcher David Price, who opted out last season because of the pandemic. Price is expected back this year.

Bauer joins a Dodgers rotation that had a major league-best 3.02 ERA during the abbreviated 60-game season last year, when the franchise won its first championship since 1988.

He gives the club a third Cy Young winner, joining three-time winner Clayton Kershaw and 2012 winner Price. According to the Elias Sports Bureau, the Dodgers are the first team to have three former Cy Young winners in their rotation since the Detroit Tigers in 2014 had Justin Verlander, Max Scherzer and Price.

With the upcoming season expanding from 60 games to a full 162-game schedule, the Dodgers can go seven-deep in their rotation, which includes Julio Urias, Dustin May and Tony Gonsolin.

Bauer was 5-4 in his second season with Cincinnati and his 1.73 ERA was second in the major leagues among qualified pitchers behind only Cleveland’s Shane Bieber at 1.63. Bauer earned $6,481,481 in prorated pay from a $17.5 million salary.

Arizona drafted Bauer with the third overall pick in the 2011 amateur draft. He made his big league debut with the Diamondbacks the following year and went 1-2 in four starts, then was traded to Cleveland in December 2012 with pitchers Matt Albers and Bryan Shaw as part of a three-team trade that brought shortstop Didi Gregorius and pitcher Tony Sipp to Arizona, outfielder Drew Stubbs to Cleveland and outfielder Shin-Soo Choo to Cincinnati.

He was traded to Cincinnati in July 2019 in another three-team deal, one with Cleveland and San Diego that sent pitcher Logan Allen and outfielders Franmil Reyes and Yasiel Puig to the Indians.

Bauer has caused controversy on social media. A female college student claimed to USA Today in 2019 that Bauer harassed her on Twitter, accusing him of retweeting an old tweet of her referring to drinking alcohol before her 21st birthday. USA Today said there were 80 tweets of Bauer that mentioned her and 20 of her that mentioned the pitcher. Bauer tweeted the woman “was obsessed with me.”

He took after baseball owners for the sport’s economics last May during bargaining to start the pandemic-delayed season.

“There’s so many ways to hide the money,” he said, adding owners could reduce ticket prices and at the same time charge more for parking garages they control through different entities that do not benefit the club.

“If I’m going to have to trust my salary to Rob Manfred marketing the game to make more money for the game, I am out on that,” Bauer said. “Let me market the game and we’ll all make more money.”

Because Bauer turned down an $18.9 million qualifying offer, Los Angeles will forfeit its second-highest pick in the July amateur draft and $500,000 of international signing bonus allocation.

Cincinnati will receive an extra draft pick after competitive balance round B, approximately No. 60, as compensation.