No. 10 Hoosiers, No. 18 Badgers meet with undefined stakes 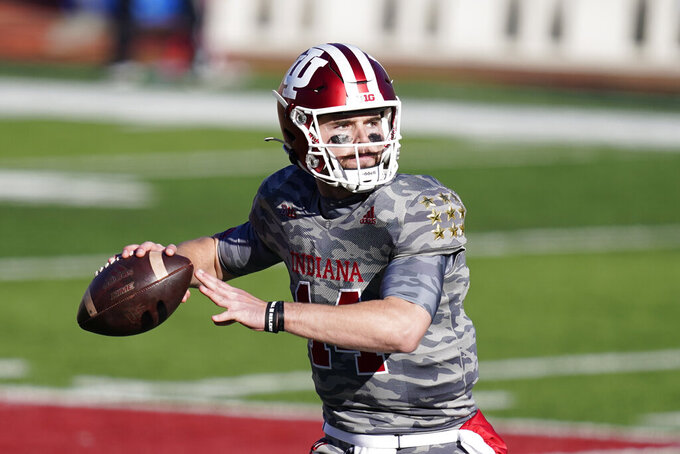 Things to watch during the seventh week of play in the Big Ten Conference:

This game illustrates the wackiness of this pandemic-marred season. It's December, both teams are nationally ranked, and the stakes really aren't clear right now. Indiana, which will be without QB Michael Penix Jr. the rest of the season because of a torn ACL, is 5-1 and, as it stands now, would be in the Big Ten championship game if the Buckeyes don't reach the six-game minimum necessary to play for the title. Ohio State is one cancellation away from that being the case. Wisconsin has had three games canceled, so it can't go to the championship game and is essentially playing for a best possible bowl slot. One caveat: the six-game minimum would be reduced if the average number of games played across the Big Ten drops below six.

The Buckeyes are running for a Big Ten-high 233 yards per game. Master Teague is averaging 95 and Trey Sermon, the graduate transfer from Oklahoma, is averaging 58. Then there's QB Justin Fields, who's always a threat to scramble. Michigan State limited Northwestern to 63 yards on the ground in its upset of the Wildcats. LB Antjuan Simmons, who verbally pledged to Ohio State coming out of high school, is averaging 10 tackles and has 6 1/2 tackles for loss.

Penn State and Iowa go on the road to face opponents that have struggled against them. The Nittany Lions are 6-0 against Rutgers in Big Ten play and have won 13 in a row over the Scarlet Knights since 1989. The Hawkeyes are on a six-game win streak against Illinois and have beaten the Illini in 11 of the last 12 meetings since a 31-0 loss in 2000.

Rutgers is an 11 1/2-point underdog at home against Penn State. The Scarlet Knights are much improved and playing with passion for Greg Schiano. The Nittany Lions picked up their first win at Michigan last week, but motivation is a question at this point.

Nebraska quarterback Adrian Martinez is still smarting over last year's 31-27 loss at Purdue, and the teams meet on the same field Saturday. Last year David Bell scored the go-ahead 9-yard touchdown on an end-around. Martinez, benched for two games, returned against Iowa last week and played a solid game in a loss.