No. 15 BYU's attention on UTSA, not rise in rankings 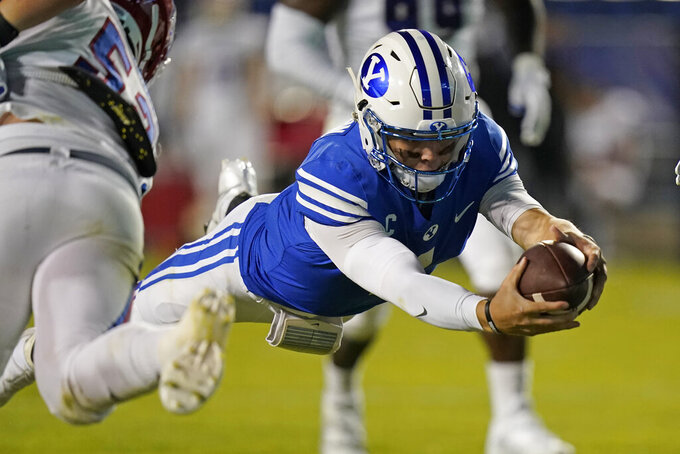 The directive this week for No. 15 BYU: Fixate only on UTSA, not that continual rise in the rankings.

The Cougars (3-0) enter as a 34-point favorite Saturday against Conference USA foe UTSA for a homecoming game at LaVell Edwards Stadium in which there won’t be any fans due to COVID-19 restrictions.

That's a big spread a week after another jump in the polls. BYU coach Kalani Sitake cautions his team, though, to stay in the moment against a formidable Roadrunners (3-1) squad.

Don’t let the hype go to the head.

“We don’t worry about (publicity) before the season, so why worry about it during?" said Sitake, who's 3-1 in homecoming games since taking over. "Stay humble as a team, stay hungry. We have a lot to prove still.”

One area where the Cougars keep making constant strides is their diligence with the COVID-19 protocols. The Cougars had to cancel a game against Army earlier this season because of a small cluster of cases at BYU.

It was a wakeup call.

Sitake said the team is seeing lower numbers “than we've ever see. If we keep trending that way, that will help us out. Not only keep our guys on the field but trying to minimize the spread on this football team and in the program.”

For an increased dedication to social distancing, he credits BYU's team leaders, who don't want to see this run impeded.

“Guys have bought in now completely to the procedures and what we are wanting to do,” Cougars linebacker Isaiah Kaufusi said. “Guys know how special of a team we are and so they’ve really bought into that as well, like ‘Hey, we’ve got a good team. We’ve got a special thing going and don’t ruin it for others. Don’t ruin it for yourself. Let's just keep this thing going.'"

The Cougars are bracing for a stern test from the Roadrunners, who are 0-5 against nationally ranked FBS teams over their 10-year history. UTSA won three straight before a 21-13 loss last weekend at UAB.

"We are going to go up there and find a way to scrap and see if we can hang in there with them and pull off a shocker.”

POWERFUL ON BOTH SIDES

On defense, BYU has surrendered just 24 points in three games. That joins the 1952 team as the fewest given up over the opening three games.

“He can really spin it,” Traylor said. “He is the best quarterback we have played. He is an NFL quarterback."

For a third straight home game, fans won’t be permitted inside LaVell Edwards Stadium because of COVID-19 restrictions.

“They all have their own unique skill set,” Sitake said.

Any thought to lessening his workload in this nonconference contest?

“It is just impossible to coach that way,” Traylor said. “Am I going to be crazy and give it to (McCormick) 40 times? That is not smart, either. We are going to stick with our plan and do what we try to do and see what that does.”